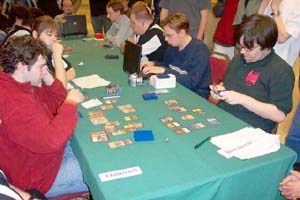 Who else but Zvi Mowshowitz would dare run TurboLand? The certifiable Genius/Madman couldn't resist, though, and he tuned his pet deck for another spin. His appearance in the Top 8 is a vindication, he says. He's hungry for this title, having never taken down a Grand Prix. He's already thinking of the finals, considering the matchup.

He's facing Diego Ostrovich, Invitationalist, former Argentinean National Champion, and Worlds Semifinalist. He came all the way to New Orleans for the Grand Prix, and he's made good. His deck is crazy, the same mono-green deck he played at Houston. It uses tons of mana producers and Gaea's Cradle to power out big guns like Deranged Hermit and Masticore. Unfortunately, he has few ways to stop Mowshowitz's juggernaut.

Ostrovich started things off with a bang. While Mowshowitz played Treetop, Island and Scroll Rack, his turns went:

"Well, it's pretty clear what I have to do: Rack for my whole hand." - Zvi Mowshowitz

Mowshowitz then sank into a deep thought-stupor where he calculated the possible trajectories of the next four turns. It's for this reason among others that few dare touch TurboLand. So much can hinge on a single decision.

Finally, he had everything in place. He played a Yavimaya Coast and passed it back. Ostrovich Cradled up a bajillion mana and used it to echo his Hermit and fetch an Elvish Lyrist. His attack forced a Moment's Peace from Mowshowitz. His turn was significantly less interesting: Coast, go. He ate a bunch of damage, falling to eight, but that was fine because things were well in hand. Intuition fetched Accumulated Knowledge, and though Ostrovich would spill endless squirrels onto the board there was little he could do to prevent Mowshowitz from going off at his leisure.

There was one turn where Ostrovich played Slate of Ancestry and drew nineteen cards. That was pretty great.

Again Ostrovich had an explosive start: Forest, Elf. Then Forest, Elf, Rofellos. Then Cradle, Poacher, Masticore. Mowshowitz had a turn two Oath, and turned up his Scrounger after about thirty cards. He spent his turn Accumulating for three, then playing Exploration and an extra island. He Scrounged Capsize, Time Warp, and island back under his deck. 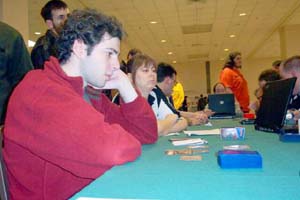 Ostrovich untapped, pitched his last card: Forest. He activated his Poacher, and Mowshowitz activated his Scrounger in response. Fortunately, Ostrovich had enough creatures in play that Cradle gave him enough mana to shoot it down before the ability resolved. He searched up a Hermit, bashed for four, and handed it back to Mowshowitz.

Mowshowitz thought hard, then Intuitioned up a fifth island and dropped a Keg. He activated it, aiming to buy an additional turn. Ostrovich turned over Bind. Mowshowitz looked at his horde of creatures and scooped. 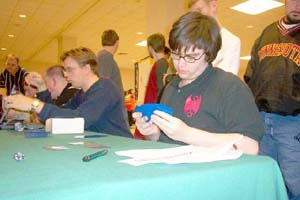 Unfortunately for Ostrovich, that meant Mowshowitz would lead for the deciding game. He started strong. Oath on turn two, Intuition for Accumulated Knowledges on turn three (after Ostrovich played nothing but three forests for fear of the Oath). Finally he tapped out to draw three and play Powder Keg.