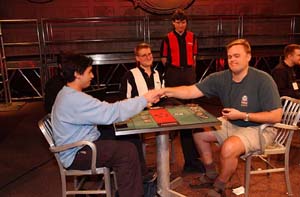 Gallitz spent several minutes deciding on whether or not to keep his opening hand, featuring six lands and a Patrol Hound. He finally chose to keep - a risky decision, since the likelihood of manaflood is very high at this point. Meraghni had no doubts about throwing away his hand, which featured an Island as the only land.

Patrol Hound and Auramancer tag-teamed Meraghni early on, prompting him to sacrifice a Forest in order to let his Lithatog take out the Hound. The players got into a damage race as Gallitz summoned an Aven Windreader, while Meraghni enhanced his Lithatog with Seton's Desire. Here's where Gallitz's mana flood started to become an issue - he had no play to make on the following turn. Meraghni on the other hand emptied out his hand to summon Cephalid Looter and Nantuko Mentor.

With an active Looter, Gallitz chose not to activate his Windreader's ability this turn. Since the only card in his opponent's hand was Muscle Burst, he did not want to give Farid an opportunity to mill away the card at the top of his deck. Despite his efforts, Meraghni chose to activate the Looter, throwing away Diligent Farmhand and thus making his Muscle Burst even more powerful.

Meraghni attacked with all of his creatures, including a Looter, on the following turn. Gallitz, still holding nothing but land, had no answer and succumbed to Muscle Burst and the Nantuko Mentor's ability.

Both players opened with very solid hands in this game. Meraghni cast a turn one Diligent Farmhand going second. Gallitz cast Peek after Meraghni drew his next card, revealing Minotaur Explorer, Werebear, Firebolt, Moment's Peace and three lands. "Good draw," Gallitz commented as he proceeded to take advantage of the recently added rule that allows a player to write down his opponent's hand in this situation. 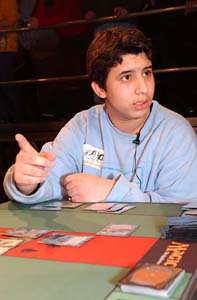 Meraghni summoned Werebear on the following turn, rather than risk losing it by casting a Minotaur Explorer first. Gallitz continued to manipulate his library, casting Careful Study and throwing away a pair of lands. Meraghni took a chance on the Explorer next turn. He was successful at keeping the spells in his hand, as he randomly discarded a Mountain. Gallitz had an answer to the 3/3 red creature in the form of Mystic Crusader, but he continued to take two points of damage per turn from Werebear and Diligent Farmhand.

Double Firebolt took out an Aven Flock. The French player continued to apply the pressure. He attacked with his other three creatures, losing a Mountain in order to save Lithatog in combat and forcing four points of combat damage through.

Kirtar's Desire stopped Lithatog in its tracks on the following turn. Gallitz did not have another creature to play, but he made his Mystic Crusader larger with Divine Sacrament. With five cards in his graveyard and two sac-lands in play, Gallitz could reach threshold at any point, making a 5/4 flying monster. All he needed now was some more creatures to hold down the fort while Crusader would make short work of Meraghni's life total.

Scrivener could return nothing better than Peek, but it put another body into play on the American's side of the table, and allowed him to dig one card deeper into his library. That extra card was enough to put Gallitz on offensive. He sacrificed his tap lands and cast an Aven Windreader, then attacked for five with the Thresholded Crusader.

With the game quickly escaping Farid's grasp, he drew a card that gave him a fighting chance. Meraghni cast Savage Firecat and attacked with all of his creatures. Gallitz threw Scrivener in front of Wild Mongrel and took four points of damage, going down to seven life points. Attacking no longer an option, Gallitz cast Psionic Gift on Aven Windreader and summoned an Auramancer - 4/4 under Divine Sacrament. Meraghni had few options open to him but to swing with all of his men.

When the dust cleared after the attack, Gallitz was down to one life point with only a Mystic Crusader in play, while Meraghni still had his Firecat and an Explorer. Fearing a trick, Meraghni attacked with Firecat only. He was right to do so - Gallitz cast out the last card from his hand, Aether Bursting the monster back to its owners hand. 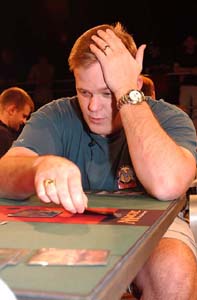 Meraghni took this opportunity to play out a few other creatures that accumulated in his hand. Despite playing off the top of his deck, Gallitz was keeping up, summoning Aven Windreader and casting a Sandstone Deadfall. With four creatures to Gallitz's two, Farid attacked with everything. Gallitz needed to be holding a trick in his hand to survive attack. Gallitz examined both graveyards, and then his cell phone rang.

"Yeah, I am about to lose this game," he said. "Catch you later." He hung up, and proceeded to pick up his cards.

Donnie Gallitz took a few minutes' break after this game. On his way back, he shouted from all the way across the room: "You cannot win a Pro Tour in California, dressed like you are in God-damned Boston!" He ripped off his sweat shirt revealing the 1997 US Nationals T-shirt underneath, threw aside his bottle of spring water, and got ready to play another game of Magic.

Gallitz's attitude changed completely between last game and this one. He was visible agitated, and in the "I am here to kick some major butt" mode. He cast a Peek targeting his opponent and attempted to write down his opponent's hand on one of his lands. When the judge said no, he ripped the notepad from the judge's hand and used that to write down the cards. The crowd was very much enjoying the show.

Meraghni summoned a turn three Spellbane Centaur. Donnie got up, walked up to the camera, and showed his hand to the audience. It featured a pair of Aether Bursts. He then drew a card and did the same thing, showing the spectators a Psionic Gift he just drew. Gallitz cast Careful Study, throwing away the Gift and one of those Bursts. Meraghni, unfazed by his opponent's shenanigans, cast Krosan Avenger and used Reckless Charge, to attack for nine points of damage. On the following turn Gallitz summoned an Aven Windreader, having it trade in combat with Krosan Avenger. 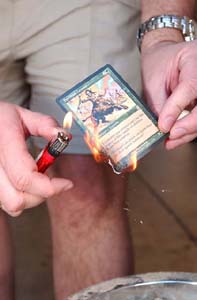 Gallitz sacrificed a Seafloor Debris to finally deal with the troublesome Centaur via Patriarch's Desire. He then summoned a Pilgrim of Justice. Meraghni cast Lithatog and flashed Reckless Charge out of the graveyard to make it attack. Gallitz made a great show of pretending to have no way to deal with the problem. He further entertained the crowd by bantering with Andy Wolf, who was down a game at the other semi-final table. Gallitz than used his pro-red guy to block the Tiger rather than Lithatog, trying to trick his opponent into sacrificing three lands - just enough to kill Gallitz. However, Meraghni did not bite. Gallitz went down to three life points. After combat, he sacrificed Cabal Pit to try and kill the Tiger. His opponent responded by sacrificing five lands to the Lithatog, achieving Threshold and keeping his now 5/5 Tiger alive.

On his turn, Gallitz pondered the board, and proceeded to offer his opponent a money-split. When that plan failed, he asked Meraghni if he could have the Spellbane Centaur. When the Frenchman declined, he offered a $10 bounty on its head. This time, Meraghni could not resist. He took the money and after conceding the game, Gallitz walked off, asking his friends to join him in the Centaur-burning ceremony.