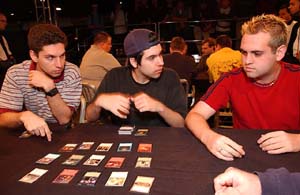 Gary Wise and Neil Reeves are two of the most respected Limited players in the world. Combined with "The Great One" Bob Maher, they make up one of the most intimidating teams around. Today, they're looking to make history in a few ways. A victory would make Gary Wise the only player to win two Team Pro Tours. Bob Maher would join the elite of two time Pro Tour Champions, and Neil Reeves would earn the distinction to confirm the notion that he is one of the best in the United States, if not the world. Their opponents, Wolfman, Rood and Pollock have been on the Pro Tour and Grand Prix circuits for a while now, and should not be taken lightly. Pollock even had success way back during the Junior Pro Tour. Make no mistakes about it- the Canadians are the underdogs here. Yet, stranger things have happened. Last year, Illuminati came into the Top 4 after dominating the swiss rounds, went against the comparatively unaccomplished Les Plus Class, and lost.

Reeves opened the first pack and took Repel, giving Ghastly Demise to Maher. This left Wolfman with Whispering Shade in the black seat, which is usually key for the anticipated mirror. Rood took Dreamwinder, giving him a 4/3 attacker for four mana against Reeves' blue deck. Pollock drafted Twigwalker, and Wise went right into the red/green audible, which Courtney's Boys had been using yesterday. He wheeled Barbarian Lunatic and Seton's Desire, rendering Wolfman's pick of Whispering Shade useless. It also pressured 2020 to switch their black seat strategy, or suffer the consequence of a bad matchup against red/green.

The second pack gave Maher the option of Repel or Beloved Chaplain, and he took the creature. The Repel went to Rood, and Pollock got Flame Burst to cement himself as red/green. This was a bit odd, since 2020 put their red/green player in the "C" seat, where Maher was leaning towards white/blue. Reeves picked up a late Frightcrawler in the pack, which had potential to be good against Rood's white/blue, and also gave him the option to go black/blue, which would create a favorable matchup. Wolfman kept on track with black in the next pack taking Morbid Hunger, and Rood continued to go white/blue with Shelter. Pollock drafted Firebolt, Wise took a Werebear and his second Rites of Initiation, and Maher picked Kirtar's Desire.

Rood opened and grabbed Aven Fisher, Pollock got Chainflinger, and Wise took Mad Dog. Reeves went a bit deeper into black as a support color with Whispering Shade, and Maher took Angelic Wall, which would be solid against Pollock's red/green deck. Wise's pack was a bit weak and he took Pardic Firecat. Reeves entirely committed himself to blue/black taking Morbid Hunger, and Maher took Patrol Hound. Odyssey was now over, and Courtney's Boys had good matchups at every spot. Maher's white deck was against Pollock's green/red, although Pollock did have some excellent cards like Firebolt and Chainflinger. Reeves had the favored black/blue on Rood's blue/white matchup, and Wise had green/red on Wolfman's black.

Wise opened the first pack, and had no solid pick. He asked his teammates what to counterdraft, and they told him to take Grotesque Hybrid, which had splash potential. Pollock counterdrafted Skywing Aven, Rood took Hydromorph Gull, and Wolfman took Teroh's Faithful to combat Wise's red/green, signaling black/white. As the pack came around, Maher got Coral Net for Pollock's green/red, and Reeves drafted Waste Away. Pollock's pack provided the game breaking Violent Eruption, gave Rood Skywing Aven, and Wolfman Carrion Wurm, which is definitely a solid threat against red/green. There were still quality picks left when the pack came around to Courtney's Boys, as Reeves drafted Soul Scourge and Wise wheeled Petravark and Fiery Temper.

Rood opened the next pack, and it was a good one. He had to counterdraft Violent Eruption, and Wolfman took Faceless Butcher. The pack came around, and Reeves got Nantuko Shade, leaving Carrion Wurm as a counterdraft for Pollock. Wolfman got Cabal Torturer out of his pack, Maher drafted a second Coral Net, Reeves took Mesmeric Fiend, and Wise got Sonic Seizure. As Courtney's Boys opened their packs to finish up Torment, Reeves got the powerful Balshan Collaborator as well as Faceless Butcher, Wise got three Petravarks, and Rood drafted a Stern Judge, which could be trouble for Reeves.

Reeves' Judgment pack gave him Mirror Wall, and Maher Shieldmage Advocate. This left the potentially devastating Filth in the pack, but it went to Rood who would need to splash black in order to wreck Reeves with it. Maher opened and gladly took Unquestioned Authority, giving Wolfman Giant Warthog, Rood Lost in Thought, Pollock Brawn, Reeves a second Mirror Wall, and Wise Harvest Druid along with Ironshell Beetle. 2020 opened the next pack, and it contained Glory. The huge bomb went to Rood, and the rest of the pack contained more goodies. Wolfman got Toxic Stench, and Pollock drafted Grizzly Fate. In the same pack, Wise took Nullmage Advocate over Brawn since his mana curve was already packed with four casting cost creatures. Rood's pack provided another bomb in Phantom Nishoba, which was passed to Pollock. Wise got Lava Dart, and Maher took Prismatic Strands and Border Patrol got through Wolfman to come back to "The Great One". As the draft finished up, Pollock got Arcane Teachings, Phantom Tiger and Genesis added a great deal of power to Wise's deck, and Maher drafted Phantom Flock. 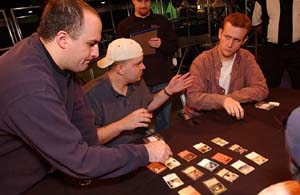 Maher: I've never been so out-opened in my life. It was ridiculous.
Reeves: We put them into the perfect colors and they just sat there and took it. I'm like "Here, I'm gonna play blue/black against your blue/white" and they're like "Okay!" And then, blue/white versus their red/green, and red/green versus their black deck!
Maher: And he didn't even take the Flaring Pain. I don't even know what...he just figured "I've opened such good cards that I don't need it."
Reeves: And they still might beat us because they opened so well!
Maher: Wouldn't Nishoba have been retarded against you?
Reeves: Yeah.
Maher: Like, I have Kirtar's Desire and double Coral Net. Don't get me wrong, he'll discard to it. I don't know, it's terrible.

Sideboard: What specifics do you think were examples of them drafting poorly?
Maher: They are in horrendous color matchups right now. If you sit down and tell us all at the table that these are the colors everyone is drafting, we'll beat them eight to nine times out of ten. But, they got the one. Congratulations. They opened the right cards.
Wise: I'm going to win my matchup, so if one of these can outplay their opponent we'll be alright.
Maher: I will outplay Elijah, but his cards are just much better.

Sideboard: Do you think that them being in bad matchups is because of what you did, or was it due more to error on their part?
Wise: Wolfman took Whispering Shade really early, so I just went red/green, which is really good against red/black. They didn't adjust fast enough, and they didn't get him enough white.
Maher: Even if you take all this blue and put in his deck, the blue is still bad.
Wise: (Wolfman) has a Carrion Wurm as a way of killing me, and that's about it.
Reeves: Whenever we put them in the bad matchups, I'd assume they'd audible one time. Like, keep their base color and just switch to a different side color to at least give them a shot. But they just sat there and took it.
Maher: When I went white/blue, he so should have gone white/red or something.
Reeves: Even green.
Maher: Right, green/blue or something. He just sat there and took it, and got Chainflinger, he got Nantuko Disciple, he got Violent Eruption. I never got Pay No Heed. It was ridiculous. Then he opened Teachings in the last pack, and the Nishoba. It was the dumbest thing ever. The Nishoba was really ridiculous.
Reeves: My match was unloseable, until they cracked Glory.

Sideboard: Do you guys think you can still pull it off?
Reeves: If Gary wins his match I think we can get one of our two.

Wise (pulls me aside, away from the table): They're right with what they said, but we're going to win anyway.

Sideboard: What was that all about?
Wise: They're superstitious.

Sideboard (back to the table): You're still shaking your head.
Reeves: It's unbelievable how much we were destroying them until the last pack.
Wise: I felt like the draft went about as well as any draft we've done over the last two weeks, in terms of the way we were drafting compared to our opponents.
Maher: It was insane. They weren't taking the cards they needed, and they tried to bounce them off of us. We bounced a million cards off them...it was unbelievable. I was so upset about the cards they opened.
Wise: I've got more insane doubles than I can count.
Reeves: I thought we outdrafted them two-to-one. We got unlucky. It's not over by a longshot.
Maher: They funny thing is, except for the Eruption, Gary was red/green right after their red/green player, and his deck is much better. He just wasn't even taking the right cards...unbelievable.

Sideboard: Are you going to run double Rites of Initiation?
Wise: I'm thinking it might only be one. I have to see how many playables I have.

Sideboard: I figured that's why you took Acorn Harvest higher than usual. You also took Nullmage Advocate over Brawn. I'm guessing that was a curve issue.
Wise: My four slot was huge, my two slot was four guys, my three slot was two guys.
Maher: He needs creatures in play before he starts dropping triple Petravark. He's always going to cast Petravark before Brawn anyway, so he just wants men in play because Petravark just buys you an entire turn...the cards they opened were retarded. The opened Nishoba. They opened Glory. They opened double Eruption. Grizzly Fate, Teachings, we have nothing like that. Not a thing. I opened a Collaborator, but I had to hate draft out of that pack.
Reeves: I have a (Nantuko) Shade that they shipped to me. And I've got a Butcher and the Collaborator and a Looter.
Maher: They shipped Looter and took Nantuko Disciple. I'd run two islands and Looter against (my) deck! Are you kidding me?
Wise: I think we're going to win. Build your decks, we're going to win.

1 Waste Away 1 Carrion Wurm 1 Screams of the Damned

1 Screams of the Damned 1 Waste Away 1 Soul Scourge