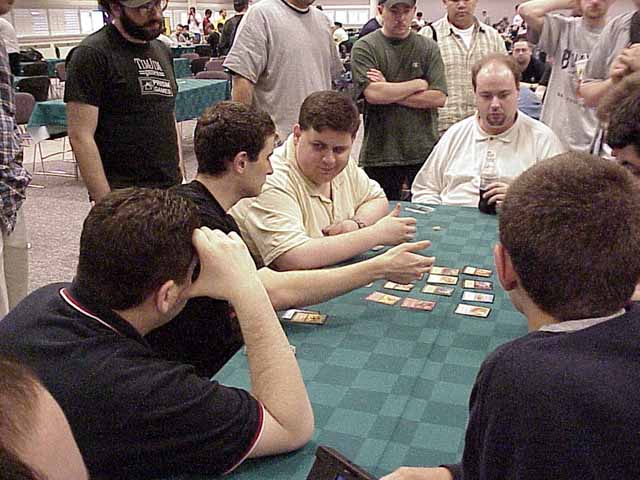 In a match pitting two of the star-studded teams at GP Pittsburgh against one another, GP St. Louis champions Antarctica (Steve O'Mahoney-Schwartz, Jon Finkel, Dan O'Mahoney-Schwartz) faces off against Huey, Ben and Casey (Billy Jensen, Ben Rubin and Casey McCarrel) in a match to decide one half of the finals

With Finkel sitting in Antarctica's B seat, he was the first to open, selecting a Monkey Cage while leaving Steve a Ramosian Lieutenant. Presumably, this decision was made due to the strength of white in Mercadian Masques in addition to the desire to get as many chances at a Troubled Healer as possible. As the draft progressed, it became apparent that Rubin and Steve O would fight for white, with Steve's WU deck facing off against Casey's GB deck, Huey's fast RU deck facing Finkel's GB deck and Dan's RU deck facing Rubin's WB deck

His recent victory at US Nats not withstanding, Finkel didn't like his chances of winning his individual match up. "Every card in Huey's deck is the nuts," Finkel yelled, taking the expression from Texas Hold 'em meaning 'the best possible'. The Monkey Cage and a Plague Wind might make the spectator think that Finkel could win any game on the well- timed top deck, but the fact that Huey's aggressive deck, featuring strong flyers, Flameshot and Withdraw contains two Rethinks that effectively nullify the Wind and Cage, makes this match up a very difficult one for Jon to win.

Almost as lopsided is the Dan OMS/Ben Rubin match, with Dan O's Red blue deck, featuring Scoria Cat, Waterfront Bouncer, Flowstone Armor and a lot of burn looking ready to take out Rubin's Rebel deck. Rubin does have a strong engine, and if he gets it going he'll be able to bring Lawbringer and Thermal Glider into play, but DanO even has an answer to the Glider, Barbed Field, that does colorless damage. 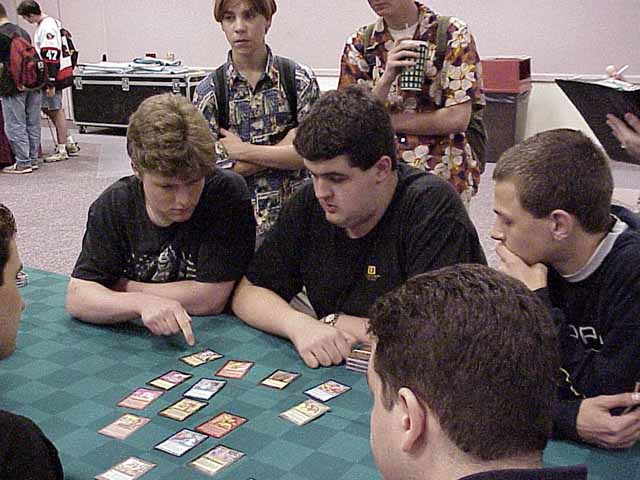 What this means, of course, is that if those two matches play out as expected, the match will come down to the SteveOMS/Casey McCarrel match. SteveO's deck, while using some sub-optimal cards, also has some power, with two Troubled Healers, Stinging Barrier and what may well be the best card in Prophecy: Alexi, Zephyr Mage. Casey meanwhile, while forced to use a number of mediocre cards like Despoil and Insubordination, has a very high number of large creatures including a Bog Elemental, which should be very good in this matchup. In the end, the winner of this match should be decided by the better draws and who plays better, and should decide which team wins the match.