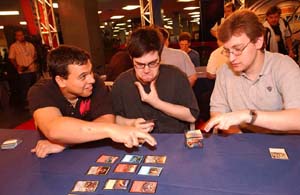 The Illuminati trio of Justin Gary, Zvi Mowshowitz, and Alex Shvartsman guaranteed that this semifinal match between the first and fourth seeds started off in good humor as they faced off against Les Plus Class, composed of Amiel Tenenbaum, Gabriel Nassif, and Nicolas Olivieri

Les Plus Class started off poorly in the first pack, which proved to be a detrimental fault during the draft. Zvi first picked Fertile Ground to start off the draft while Alex picked up Spite/Malice. On the French side of the table, Amiel third picked Zap, Gabriel took Ravenous Rats, and Nicolas took Galina's Knight. Justin, noticeably happy that two cards that matched into one archetype, wheeled Kavu Aggressor and Hate Weaver. After these first few picks, it was evident that each of the Illuminati had cards that defined the 5-color green, blue/black, and red/black archetypes respectively for Zvi, Alex, and Justin. In addition, the French gave their player C a pro-red bear, and it turned out that Justin, player C, was the one loudly signaling his intention to draft red/black. After pack 1, the Illuminati were all solidified into strong color combinations, while the French team had little going for them.

Things looked brighter for the French team in the third Invasion pack with Amiel first picked a Crimson Acolyte, showing that he could work two fronts in the draft: drafting strong cards for his deck while also taking cards that could specifically hurt his opponent. After all, in team Rochester draft, since you are only playing one opponent, drafting main-deck hate can break the match in one person's favor.

By the sixth Invasion pack, however, the French team was clearly disoriented by not having solidified each of their decks into solid archetypal forms. Furthermore, the French team's drafting cohesion began to bend when Nicolas took a card of which his captain disapproved.

The first pack showed the Illuminati getting strong picks for their decks, solidifying them into three concise and proven archetypes, while the French team fell into disarray after the three packs they opened provided them with nothing more than decent creatures rather than archetype-defining cards. This unbalanced first pack is not to say that the French team simply got unlucky in busting poor packs; the credit definitely belongs to the Illuminati who managed to strip the strongest cards from each pack, even if they were blatantly hate-drafting them. The French captain, Gabriel, still seemed to at least be trying to look confident, perhaps implying that he had formulated some plan to make what seemed to be a poor opening for their team into a groundwork from which to grow. Still, Gabriel needed to stop his teammates from drafting cards that other people on the team needed more.

Planeshift seemed to open up a new world of possibilities for the French team. Nicolas' first pick Galina's Knight looked far better when he picked up a first pick Questing Phelddagrif out of Planeshift. Pack 3 looked momentarily poor when Gabriel had nothing but a frown for his first pick Arctic Merfolk, but looked up once more when Amiel brought a Nemata, Grove Guardian out of the first pack to solidify himself into green/red. In the fifth pack, Nicolas drafted a Primal Growth, signaling that he intended to get in the green color spectrum game with Zvi, but the only purpose thus far in the pick was to both solidify his three-color Phelddagrif mana-base while preventing Zvi from getting a late pick land searcher. Of course, Zvi wasn't exactly hurting for quality mana fixers, as Nicolas' pick would have been Zvi's second Primal Growth, not to mention the fact that Zvi had already taken a number of lair lands and Fertile Grounds. Planeshift gave Justin a wide variety of amazing black/red beatdown creatures including 2 Caldera Kavu and a Lava Zombie while Alex spent the pack solidifying himself in U/W control splashing black by picking up more flyers including the insanely resourceful Cavern Harpy. 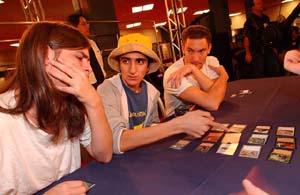 The Apocalypse pack, however, went back in favor of the Illuminati. Alex got an early Standard Bearer and a Coalition Honor Guard, Zvi was handed a fifth pick Consume Strength, and Justin picked up both a Spiritmonger and a Dead Ringers which both look like game-breakers in his semifinal matchup. The French captain took a Dead Ringers of his own for Zvi's green-based deck, but Amiel spontaneously decided to take a Diversionary Tactics against the wishes of his teammates, shipping Zvi a very late pick Jungle Barrier. In fact, this problem arose several times in the final pack where a disagreement in picks among the French team simultaneously benefited the Illuminati while weakening Les Plus Class.

Throughout the draft, the French team made the gasping gestures that only supported what was happening on the drafting table: they were responding too slowly to what the packs offered them, and time was not on their side. The Illuminati organized their archetypes early and only took advantage of the fact that Les Plus Class was shipping them quality cards while they were busy making their mind up about both what they were drafting for their decks and leaving for their opponents' decks, friend and foe.

Justin's base red/black deck looks like it has a better average creature based than Amiel's base green/red deck. While Amiel sports Nemata, Justin has the nearly-as-insane Spiritmonger to break open the creature war. Furthermore, Dead Ringers spells serious trouble since it will both take out two creatures and build tempo from an early game which should see Justin dropping the superior threats. Gabriel looked like he came away from the draft with a slow blue/black control build, although he has many options in his deck construction. Zvi's 5-color green deck is both solid and traditionally advantaged in his matchup against a slower control deck, but he is not on auto-drive quite yet. Alex picked up a very strong blue/white deck splashing black; his many flyers and touch of spot removal makes him seem advantaged against Nicolas who looks like he has a pretty evenly distributed 3-color deck, although he also has options and will not necessarily split the colors the way I'd expect.