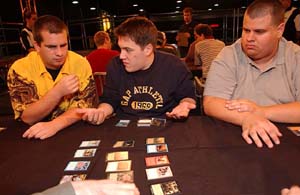 This matchup should be very interesting, as both teams have ridden the strategy of black/X in seat A, blue/green in seat B, and red/white in seat C to the top of the standings. Now that they know they'll be playing what looks like three mirror matchups, it will be interesting to see whether the New Yorkers or the Germans have a better contingency plan.

Kai chose to kick off for some odd reason once he won the flip, possibly because he didn't expect either team to switch colors reactively. Kai took Rabid Elephant from the first pack, and Marco took Embolden. Sonne opted for Dirty Wererat over Morbid Hunger, which McCord defensively drafted. Baberowski wheeled Crypt Creeper and Pilgrim of Virtue, which is exactly the kind of stuff he was looking for.

Marco's pack presented him with an Iridescent Angel, which he obviously took. He now had the option to go white/blue or to simply splash the Angel into white/red. Slay Pillage Gerard took another Wererat, an Aven Windreader, and a Chainflinger in order, showing they planned to stick to their strategies.

Over the next two packs, Sonne took a Scrivener first, then wheeled a Werebear and a Peek. It looked like he had no plans of playing the more traditional black/red or black/white, but rather was looking to blue or green as his second color. Since black/blue normally loses to black/red, green would be the better choice.

The last few packs of Odyssey went as expected. Gerard picked up an Ivy Elemental. Kai wheeled Seton's Desire and a Stone-Tongue Basilisk. Dirk d'ed up a Cultural Exchange since Kai wanted Krosan Archer for his matchup.

At one point, Dirk took a Mystic Zealot and Marco a Chainflinger, allowing Pianna, Nomad Captain to get to McCord. I'm sure McCord is looking to go hyper-aggressive to keep Iridescent Angel out of the picture, so it will be interesting to see how Pianna affects things.

Torment started out normally enough: Dirk took a Faceless Butcher first, then Slay Pillage Gerard opened a pack that gave McCord a Pardic Arsonist, Fabiano a Circular Logic (and a not-irrelevant Coral Net on the way back), and Sonne a Shambling Swarm.

The third pack was interesting in that Fabiano opened a Pardic Collaborator. Neither black player was in red, so Sonne took Cabal Torturer over it. Dirk did end up with the Collaborator, and may play three colors because of it. (Black/white/red has been played a fair amount in the A seat in this event, and there isn't even Dega Disciple to reward you.)

In Torment pack five, Marco took Hypochondria over the more-powerful Grim Lavamancer, but it was evident to both teams that that was the correct pick. Lavamancer dies way to easily in this matchup to the slew of Crackling Clubs, Lava Darts, and even Chainflingers.

Other Torment picks of note were a Butcher for Sonne, a second butcher for Dirk, a Hydromorph Gull for Fabiano, and a Possessed Aven for Kai.

Phoenix Foundation started off Judgment with an Erhnam Djinn for Kai (over Sudden Strength) and a Chastise for Marco (over Anger). Sonne, who had quietly been hording green scraps (including an Anurid Scavenger), took Sudden Strength, Giant Warthog, and Brawn in three straight packs. Judgment is normally unkind to the black mage, but the green players can make out like bandits.

Sonne took the Warthog over Thriss, Nantuko Primus, which his teammates later questioned. Fabiano took Aven Fogbringer from that pack, allowing the huge but oh-so-expensive Thriss to get to Kai.

Fabiano got an Elephant Guide from Sonne's Brawn pack, but that allowed Kai to pick up a Cephalid Constable, which could spell trouble if it hits early and gets enchanted with Seton's Desire.

The middle of Judgment went normally, with Kai picking up two Elephant Guides of his own. Dirk had to counterdraft the second Thriss because Sonne would wreck him with it. Similarly, Sonne countered a Selfless Exorcist from Marco at McCord's insistence, because it can "eat" Anger and keep his Vigilant Sentries from threshold. 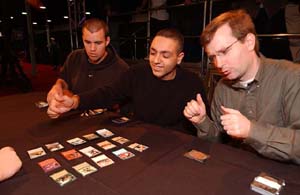 The last pack was interesting. Dirk opened Treacherous Vampire, Arcane Teachings, Phantom Tiger, and Filth. Without hesitation, Dirk took the Incarnation, Kai the Tiger, and Marco the Teachings, allowing the 4/4 flyer to get to Sonne.

After the draft, the Germans stated that Filth is better in the black-on-black match than any other card is in any other matchup (including Glory, Aboshan, you name it). While I agree that if Filth had gotten to Sonne it would have destroyed Dirk, Dirk's deck is not very aggressive, he has only two ways to discard, and Sonne has two Gravegougers. I may have taken the Vampire and had Kai counter the Filth.

As it stands, Dirk's matchup against Sonne is very bad. Dirk is playing three colors with a lot of defensive weenies, and Sonne has a much more robust deck full of monsters. I expect Dirk to lose.

Sonne going into green may have made Gerard's deck just a tad worse, and I think Kai has a sleight edge in the middle, especially because of his excellent array of creature enchantments. Marco and McCord have similar decks with Marco possessing the trump card of Iridescent Angel (although McCord may have grabbed a Sandstone Deadfall).

Phoenix Foundation is the clear underdog in the A seat, giving then no breathing room in B and C where they have sleight advantages. It looks 50/50 on paper, but Phoenix Foundation always wins against even odds, so I expect to see them in the finals for a second straight year.