baltringues de Ludipia sat down across from We Add bright and early Sunday morning. Atlanta has been good to these two teams. Les baltringues de Ludipia (Benjamin Caumes, Nicolas Bornarel, and Camille Fenet), recorded an amazing 9-0-2 record on the weekend, while We Add's record in the Pro Tour was 9-1-1. We Add went 5-1 in the Last Chance Qualifier to even make it to Friday, meaning their record for the weekend is an astounding 14-2-1. These two teams drew in the last round of the Swiss but now they must face off to see which will continue onto the finals and a chance at Pro Tour stardom. 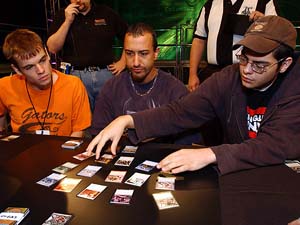 We Add (Smith, Pacifico, Chambers) had their pick of bombs.

We have listed all of the contents of the packs here for you. Looking over the packs before the draft saw what would be a favorable draft for the Americans. Adam Chambers, Andrew Pacifico and Don Smith were happy to see their opening pack contain both a Nagao, Bound by Honor and a Thief of Hope. The decided to have Pacifico go into white with Nagao while Chambers had to decide between the Thief of Hope and Rend Spirit. Not wanting to commit to creature-specific removal so early in the draft, he took the Thief of Hope. The Kodama's Reach got all the way around to Smith as he wheeled two green cards.

The second pack saw Fenet choosing his colors. It looked like he was going to go into blue-white and stay there. In the first pack he took a Kitsune Blademaster and got a late Hisoka's Defiance. Hisoka's Defiance has been one of the late-pick gems of the weekend. Normally, Hisoka's Defiance is barely playable in Limited but since you will know exactly what your opponent will be playing, Hisoka's Defiance will often turn into a superstar versus many of the sets Spirits.

After this pack, the French team started to signal on the back of their cards. While standing behind them I could see their plans to send Caumes into green-white. He had already picked up a Mothrider Samurai and an Isamaru, Hound of Konda but was searching for a second color. 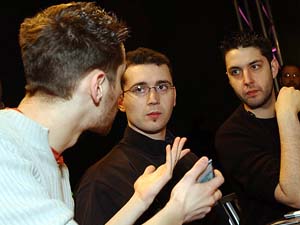 When his teammates suggested going green-white, Caumes seemed receptive to the suggestion. Nothing in the packs was really forcing him to go any other color so he slowly started picking up green cards. The French were hoping to take advantage of We Add having Smith add red or black into Smith's green deck. Instead We Add decided to have Smith be their green-blue mage. He grabbed Soratami and both teams could tell that the A seat match would be slow and grueling determined by cards like the slow but powerful Tatsumasa, the Dragon's Fang.

The thing that most hurt the French in this draft was the lack of bombs. Fenet did pick up a Horobi's Whisper and Hideous Laughter but Caumes was playing green for just solid fat. Chambers on We Add had plenty of bombs. He picked up a Kodama of the South Tree from Champions of Kamigawa and an Ink-Eyes, Servant of Oni. These two creatures and a plethora of removal for Chambers led him to be very confident after the draft was over. He pointed to the two Commune with Nature in his deck and talked about how amazing the card is saying, "If you have 16 or 17 creatures these work like extra bombs in your deck."

The middle matchup became the two red players battling it out. After Pacifico took the Nagao, Bound by Honor he continued to pick up solid white and red samurai. He added a Ronin Houndmaster and Ronin Cliffrider to help out Nagao. His opponent, Bornarel, was focused on a red-black strategy. Bornarel was the third black mage at the table. Two people drafted blue, three green, three black, two red, and two white. We add doubled up on Green mages having both Smith and Chambers play green. Bornarel drafted a very aggressive red-black build picking up creatures like Goblin Cohorts and Nezumi Cutthroat at every opportunity. The Goblin Cohorts will have problems getting past the Bushido creatures in Pacifico's deck, just as the French will have trouble getting past the Americans because of the their lack of bombs.

1 Hall of the Bandit Lord 1 Okina, Temple to the Grandfathers 1 Stone Rain

1 Humble Budoka 1 Nature's Will 1 Wear Away

1 Call for Blood 1 Harbinger of Spring