draft was about two very different teams with remarkably similar strategies. Nova is made up of a grizzled Pro Tour veterans including Gab Tsang, who last saw Sunday action in 1997. He was at the forefront of Canadian Magic for many years, and although he does not play nearly as much as he used to, Gab was the only player David Rood would team with besides Gabriel Nassif.

The trio approached each draft yesterday in a reactive fashion, preferring to allow their opponents to "kick off" when given the choice. Ideally this allowed them to position their colors based on their match-ups and more than once they were able to make their opponents desert their precious first two picks based on how the packs flowed.

"That is always your goal," explained Tsang. "I mean, if you can get them to waste picks it can only be good for you."

There was one match Saturday where David Rood picked up a very early Sokenzan Bruiser against an opponent, who had first-picked Hanabi Blast. It was enough to force that opponent to switch colors mid-stream. David Rood has been very successful in this format with Sunday appearances at Pro Tour-Boston and the Venice Masters -- that experience has proved very valuable for him this weekend.

"Most players come into the draft day thinking they know all the pick orders from playing online but in this format you have to be able to reevaluate your card ranking on an almost pick-by-pick basis. I will gladly take Sokenzan Bruiser over a burn spell against an opponent with Mountains," explained Rood. "I guess that is easier to do when you haven't played much because your pick orders aren't as ingrained. Gab is very good at making those types of decisions."

While many of the teams I spoke with Saturday had very definite ideas about which colors they wanted in what seat, there were none of those prejudices for Nova.

"All three of us played all five colors at some point yesterday. It doesn't matter what seat you are in -- it matters what match-up you are in," explained Nassif.

The Japanese team was also very flexible in their strategy and also preferred to be on the receiving end of the kick off. In fact, Itaru Ishida, who was the mastermind behind the draft strategy for the top Japanese teams Saturday, claimed that when Japanese teams opened second yesterday they lost exactly zero matches.

That may be true, but they did not have the advantage of looking over the pack lists prior to the draft like I did. Whichever team kicked off would almost certainly be able to assemble a double Glacial Ray deck since there was one in the opening pack and another one in the tenth pack. The receiving team would have a chance to block that from happening, but they might want to take the Kumano in that pack instead.

No Spin won the coin toss and elected to receive. The opening pack started out with Rood putting himself into the Glacial Ray deck while Nassif took Befoul. The Japanese picks went green, green, black -- the last in response to the Befoul -- with Might, Feral Deceiver, and Gibbering Kami. Gab Tsang showed blue-white with Petals of Insight and Kami of the Painted Road.

The second pack was more challenging as Nassif got the only pick for Nova and there were plenty of staple cards to go around. Nassif looked to his teammates for counsel as to what to take between Honden of Infinite Rage and Ryusei the Falling Star. He took the dragon and the Japanese team swooped up the Honden, Kitsune Blademaster, and Ronin Houndmaster. Gab Tsang stayed the white course with Hundred-Talon Kami while Rood wheeled Brutal Deceiver and Sokenzan Bruiser -- a clear message for Kenji to stay away from red. 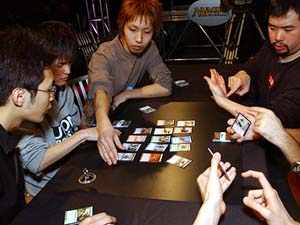 Kaji opened up Earthshaker and One Spin had two players vying for red when Saito took Yamabushi's Flame on the other side of the table. Kabuto Moth in the middle of that solidified Kenji with several of the top white commons. Tsang made a move for black with Nezumi Cutthroat and Rood got his favorite card on the weekend -- Soratami Mirror-Guard. Nassif took his third color and with Kami of the Hunt and by the nods of his teammates had found his base color.

Tsumura opened next and he pounced on blue-white with a Mystic Restraints and sent Saito Kiku, the Night's Flower. Gab Tsang happily took Scuttling Death while Rood provided a bull's-eye for the Mystic Restraints with Frostwielder. There was another Frostwielder in the next pack and the black-red Saito took that sending a Kami of Ancient Law, the Restraints-nullifying Teller of Tales, and a nice Yamabushi's Storm to Nassif.

The packs played out along similar lines until the picks swung back to Kaji, who would get his team's only pick out of pack 10. He looked over at Saito and obviously took the Kumano. He looked across the table at Saito and signaled for the C player to abandon his red and go green. Nassif had to defensively draft a Nezumi Graverobber out of the pack and Rood and Tsang picked up Glacial Ray -- his second -- and Kabuto Moth.

When the packs rolled around to Betrayers, you had the following color combinations on each team:

Gab Tsang: Black-white with no removal for Kumano save a Distress.
David Rood: Blue-red with double Glacial Ray plenty of splice, two Frostwielders, and two Soul of Magma.
Gabriel Nassif: Green-red…maybe. He could still make a play for black based on what happened in the third pack

Tomohiro Kaji: Red-Black with one Honden in each color and Kumano
Kenji Tsumura: Blue-white with double Mystic Restraints, Blademaster, Moth, and Soratami Savant.
Tomoharu Saito: Black-green, although he had to hope the packs fell his way since he was scrambling after green for only two packs of Champions with six packs of Betrayers to make it happen. 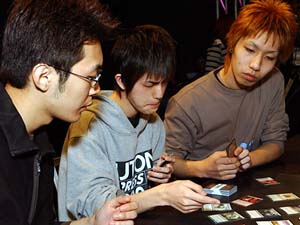 Kaji, Tsumura, and Saito had to rethink their plan.

Betrayers kicked off with a First Volley for Rood and a defensively drafted Horobi's Whisper for Nassif. It was Cohort, Palliator, and Loam Dweller for the Japanese who may have made a mistake by letting Three Tragedies reach Tsang. On the play it would give him and excellent fifth-turn foil to Kumano. He also picked up a Kami of the False Hope on that wheel. Nova has the little fog guy high in their liquid pick order and claimed to like him better than Waxmane Baku in some matchups.

The second pack featured some interesting picks: Nassif took an Ogre Recluse instead of defensively drafting Throat Slitter, which went right into Kaji's pile. The real curiosity in this was Kenji's pick of Tallowisp over both Waxmane and Split-Tail Miko, which made it around to Gab Tsang. Rood took a Frostling and Blademane Baku but that meant a Minamo's Meddling would make its way back to his opponent and with two Glacial Rays that could have a devastating effect.

The third pack could not have lined up better for One Spin as they took Torrent of Stone, Shimmering Glasskite, and Genju of Cedars. It wasn't so bad for Nova either -- they took Bleeder, Callow Jushi, and Isao, Enlightened Bushi. The rest of the packs played out with no big surprises until Nassif deck took a surprising turn for the better when the final pack went Ogre Marauder, Torrent of Stone, and then Iwamori of the Open Fist for Yellowhat.

After the draft both teams seemed to agree that the key matchup was going to be the B seat between Rood and Tsumura. Nassif's match was expected to favor Gabe, while it seemed like Tsang had no chance against Kaji's powerhouse. Rood looked to have the advantage with his crazy Glacial Ray action but Itaru Ishida felt that if the Japanese team had a chance to win it depended on Tsumura getting his Tallowisp into play to find both of his Restraints and Phantom Wings.

"If Teller hits the table for Rood, it is all over," explained Ishida. "He has to gain the tempo with Phantom Wings and the Restraints. The advantage is definitely Rood's but Tsumura can win."

Another card that could be large in this matchup is Minamo's Meddling which could be an instant-speed Three Tragedies against double Glacial Ray.

1 Honden of Cleansing Fire 1 Indomitable Will