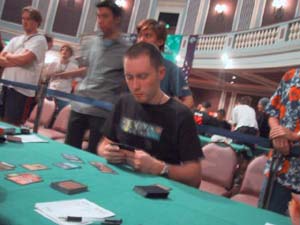 Egidio De Gois hails from Sydney, and though he hasn't made his mark internationally, he definitely has the respect of his local peers. He drafted an unorthodox three-color (Green, Blue and Red) weenie deck, that intended to come out of the gates flying and finish off the opponent with one of three Aven Windreaders. Roger Miller is from across the Tasman Ocean and is the New Zealand National Champion, and had drafted a Black/Blue control deck, with notable cards being two Psychatogs, Braids, Cabal Minion and Mortivore.

Roger wins the toss, elected to play, and kept his hand. Egidio on the other hand decided that his 6 land and Aether Burst hand wasn't suitable, and so threw it back in for a more suitable six card mix. Miller got out a Milikin and a Psychatog, with de Gois only replying with a Werebear and Cartographer. He was a little short on blue mana, and so was forced to sacrifice two Saclands to summon an Aven Windreader.

Unfortunately for Egidio, the Kiwi was able to suck the life from the Windreader with a Morbid Hunger. Egidio was able to maintain the beats with a Rabid Elephant, and a turn later Seton's Desire made him a even greater threat and started to take large chunks out of the New Zealand champions life total. Meanwhile, a Dusk Imp summoned by Roger was trying to race in the sky with little success, but was soon joined by Treetop Sentinel. Egidio was unable to get through his final damage, and the race was turned around with a timely Deluge.

Egidio chose to play first this game, but didn't really have any real beatdown, with his 3rd turn Cartographer being horribly outmatched by a Psychotog on Miller's side. But Egidio continued to attack unfettered by the possibility of losing his beloved townsfolk and scared Roger into not blocking for the first two attacks. On the Kiwi's side of the board, it started to develop slowly, with him having a few mana problems. Egidio attempted to bolster his attack with an Ember Beast, which was Syncopated. 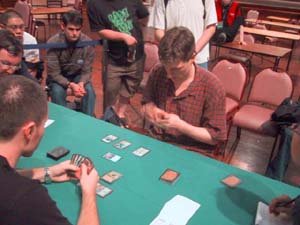 But once again Egidio was able to sneak through a Rabid Elephant and Desire it, again causing problems with Miller's defenses. He was able to stabilize with a 3/3 Mortivore, but was unable to find any decent regeneration mana as his two black sources were a Darkwater Catacombs and a Cabal Pit. A regenerator was not going to deny Egidio this game, and he was successfully able to burn out Miller with a Howling Gale and two Volcanic Sprays.

The final game to determine who would proceed to the finals had Miller on the back foot early with de Gois leading with a Diligent Farmhand, Wild Mongrel, Werebear and Druid Lyrist, all by turn 3. Miller took some of the early beats, but tried to stave off the weenie by summoning Braids, Cabal Minion. This strategy seemed a bit strange since Miller was light on land, but his strategy soon wore down Egidio's attacks, with Miller demising a Krosan Avenger.

Finally Miller was forced to block the Mongrel with Braids, but not before Miller had Diabolic Tutored for a Mortivore, now extremely large due to the earlier skirmishes. In a last ditch effort to push Miller into striking distance, the Sydneysider attacked with his creatures, losing the Mongrel to the Llhurgoyf. By now Egidio was spent and had no comeback after his final creature, a Pardic Firecat, was Morbid Hungered. The Mortivore now entered the attack phase as an 8/8 and the game soon was over with Miller holding a Syncopate to protect any possible comeback from the Australian.