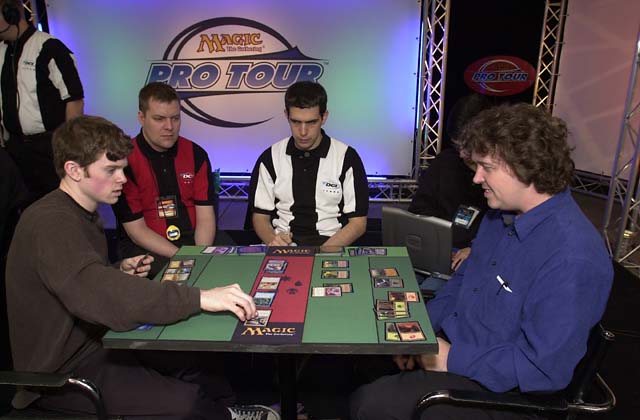 Two old-timers met in this all-American semifinals under the piercing glaze of the cameras, a fairly recent and exciting feature in Magic, and the gathering crowd. Comer won the coin flip, decided to play first and they went into shuffling mode trading comments about Dan newfound game speed.

Alan started the game with a Thornscape Familiar on his second turn. A Hobble two turns later stopped the Familiar, but Comer dropped a Yavimaya Barbarian and Quirion Sentinel to keep pushing on. Clegg once again used an Hobble to stop the Barbarian and further cycle through his deck to such an extent that he was forced to discard losing a Silver Drake.

When he finally found his fourth land he dropped a Razorfoot Griffin. Meanwhile Comer had some different mana problems: he had some very expensive spells in his hand so he used a Quirion Trailblazer to fetch a Mountain. On his next turn, after some deliberation, perhaps afraid of an Exclude, he played a Serpentine Kavu sending it into the fable Red Zone. The Griffin blocked the Kavu and got Repulsed to give Dan another card and draw a puzzled look from Alan.

And Rout it was. Alan lost his horde but bounced right back into the lead with a Might Weaver and a Kavu Climber. Unfazed, Clegg used a third Hobble to stop the Climber and replayed his Griffin.

With Comer holding back Dan felt confident to swing with the Griffin, dropping Obsidian Acolyte, Galina's Knight and Tower Drake to hold the fort. The table was now his and his creatures were busy gathering frequent flier miles with their trips to the Red Zone while he added a Glimmering Angel to his air force. Alan's only spell during this period was a meek Nomadic Elf. With the game winding down the Galina's Knight took to the skies as well with a Wings of Hope.

"That is a pretty big air force you have there," said a smiling Alan Comer just before conceding the first game.

They both made minor adjustments to the deck with Alan getting an Island to power up the Blue half of his Spite/Malice. They talked about their first game while shuffling:

Alan: "That was very impressive."
Dan: "You were wondering why I repulsed the Griffin."
Alan: "Yeah, but made a lot of sense after the Rout."

After trading good luck wishes Comer came out with a second turn Yavimaya Barbarian and a third turn Nomadic Elf. His remaining hand was even more impressive: Molimo, Maro Sorcerer and Nemata, Grove Guardian. Clegg focused on stopping the Elvish duo by dropping a Kangee Disciple, using it to kill the Nomadic Elf trying to cut down Comer's mana options.

He then played a Glimmering Angel and traded it for the Yavimaya Barbarian while Alan dropped land after land. Dan went into turbo mode by dropping Galina's Knight to herald in a Sliver Drake. Comer Zapped him to get an extra card and was rewarded with a Serpentine Kavu. He played and it got Hobbled. 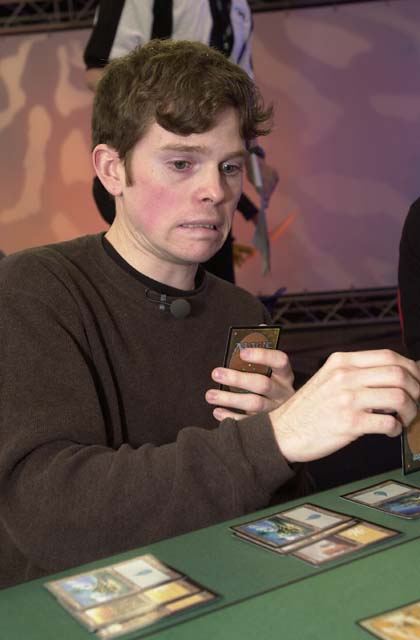 His next draw was a Thornscape Familiar that held the Knight back but the Drake was free to roam the Red Zone. The Familiar and a new Kangee's Disciple traded before a Quirion Trailblazer got Alan his much-sought sixth land. The first bomb was Molimo, Maro-Sorcerer (with Comer now holding his two remaining legends: Verdeloth and Nemata). Clegg tried to race with his Drake and a Tower Drake against the scary 7/7 trampling Molimo.

When the legendary behemoth rushed in the Red Zone, Clegg thought for a long time but took the damage. His problem then got worst when a one token kicked Verdeloth came into play. Clegg hit back with his two fliers, holding back the Knight and an Obsidian Acolyte, and Hobbled Molimo.

With only three life points Alan was forced to think hard during his turn. He attacked with everything, hoping to trick Clegg. Dan didn't flinch and won during the following attack phase.

Despite the two-game lead, Dan's face was still a mirror of pure concentration going into the third game. Comer was silent and after a minor sideboard tweak dived right into the shuffling as well. Dan went back to his sideboard for some very lengthy, yet minor, changes. He was then forced to take a mulligan while Alan got a good first hand and naturally kept it.

His first creature was a second turn Thornscape Familiar followed by a third turn Slingshot Goblin burning for one since he tapped an extra land. Clegg played an unkicked Prison Barricade that blocked the Goblin and then got Zapped out of the way.

The next road block in Alan's way was a much tougher Galina's Knight. He attacked with the Familiar and played a Mirrorwood Treefolk. Dan stared at his hand for a few minutes and Hobbled the Treefolk. All Comer could do was swing with the Familiar while looking at the expensive spells in his hand.

Kangee's Disciple was Clegg's next creature, keeping the annoying Familiar away from the Red Zone. On the next turn, the Disciple attacked Comer and was stopped by the Goblin with both creatures exiting the game. The Knight then gained Wings of Hope. Alan played a Nomadic Elf and Clegg played an Honorable Scout. With both players now reduced to a "Draw-Go" cycle for a few turns.

Clegg played a Silver Drake and Comer used a Simoon to destroy the Scout and force Dan to bounce the Drake or lose the Wings of Hope while bouncing the Knight. Clegg then tapped out to play a Glimmering Angel that Comer destroyed with a Plague Spores that also took out Clegg's lone Plains.

That signaled the return of Alan Comer. He played a Tsabo's Assassin that got Repulsed, netting Clegg another Plains, but stuck around the second time. Alan's hand was scary: Spite/Malice, Mire Kavu, Kavu Climber, Serpentine Kavu and Molimo, Maro-Sorcerer.

The Assassin killed the Knight and the Green duo once again roamed into the Red Zone with Dan Restraining one of them to gain some time. When Dan tried to Rout Comer was ready with Spite/Malice and was now free to drop the Serpentine Kavu getting a quick concession from a helpless Dan Clegg. 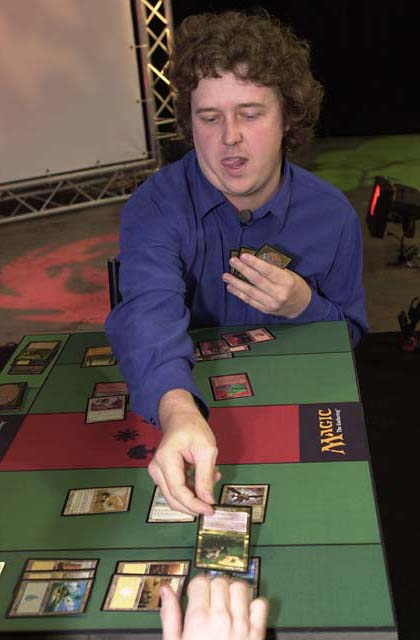 Comer's early Yavimaya Barbarian was quickly stopped by a Razorfoot Griffin and a kicked Prison Barricade. Comer Zapped Clegg looking for some extra steam and played a Gaea's Might to kill the blocking Barricade. Clegg then played a kicked Ardent Soldier and gave it Wings of Hope which, of course, made it a perfect target for Comer's Spite/Malice.

Alan added a Red duo to his side: Slingshot Goblin and Mire Kavu, which got Hobbled, while Clegg dropped a Glimmering Angel. When Comer's Barbarian and Goblin walked into the Red Zone the Griffin came to the rescue blocking one of them. However Comer had a trick up his deep blue sleeve. Dan fumbled with his mana and was forced to use a Repulse to save his Griffin from an Aggressive Urge.

When the Griffin came back it brought along a Kangee's Disciple. A Plague Spores took the Griffin out for good taking an Island down as well. Dan was now visibly upset with his mistake during the previous combat phase and could do little when a Tranquility released the Mire Kavu to put him against the ropes.

He blocked as best as he could and Repulsed the Mire Kavu to get some much needed breathing room. He Routed to wipe the table but Comer dropped a 7/7 trampling Molimo, Maro-Sorcerer. Dan dropped a Tower Drake with six Plains to minimize the damage and Comer used a Quirion Trailblazer to pump up his Molimo. A 2/7 Drake was not enough to stop the green machine.

Now alone in the stage they both shuffled in silence with Dan trying to pump himself back into control after the disappointing fourth game. Sitting across from him Alan, who had just fought back from a 0-2 deficit, again retouched his deck looking for the extra special edge in this final match.

Alan: "You have a really good deck and I'm surprised you lost those two games."

Comer took a risk by keeping a fairly slow hand but has soon rewarded with a second turn Might Weaver. A Kangee's Disciple showed up across the table but Clegg didn't want to trade. It was Comer's turn to fumble his mana and he was forced to give the Disciple trampled to avoid an embarrassing mana burn. He then try to walk his Weaver into a fresh, and kicked, Prison Barricade and Dan let it through afraid of any trick.

A Glimmering Angel and a Mirrorwood Treefolk came in and again Comer was anxious to use the Gaea's Might in his hand sending everyone in while Clegg was almost tapped out. The Disciple blocked, and killed, the Weaver. Once again a Quirion Trailblazer helped Comer expand his mana base, this time with a Mountain.

The game ground down to an almost complete halt with Clegg taking a long time to decide what to do with his four-card hand. Meanwhile Comer was holding two legends, Molimo and Nemata, with five mana in the table (six if you was willing to sacrifice his Tinder Farm). He finally got his turn and sent his Treefolk in. It got blocked by the Angel and the Barricade and Alan played his Gaea's Might on it.

Clegg put an end to that plan with a Repulse but that cost him his last blue mana allowing, Comer to drop Nemata while Dan roll his eyes still muttering and shaking his head during his turn. Comer could now produce two tokens a turn. Dan used a Shifting Sky to turn everything Red and played an Honorable Scout to gain four life. The Scout then made a kamikaze leap into the incoming Nemata.

With the game dragging down, Dan again read the Nemata looking for some hidden ray of hope. He sent the Angel in and watched Nemata spawn two tokens before responding with an instant Rout. This later led to some confusion over the timing because Dan's intention was to Rout after the last.

Alan: "Are you Routing or not?" (while waiting for Dan to make up his mind).

A Mire Kavu and the returned Mirrorwood Treefolk came out to play but the Kavu got locked under a Hobble and Clegg played an Obsidian Acolyte. That was not enough to stop the incoming Molimo but he bounced it with a Repulse. Comer played a Kavu Climber and a Slingshot Goblin holding back the Molimo to avoid an Exclude. That army was enough to make Dan flinch and block the token.

"Molimo is scared. You can go again," Alan Comer joked seconds before Dan Clegg extended his hand and conceded the final game.

"I can not believe I got out of that." was Comer's first comment as he walked out of the stand. He still couldn't believe he had come back from the brink of destruction, a 0-2 deficit, to snatch a stop in the finals where he will meet the unstoppable German title-gorging machine Kai Budde.