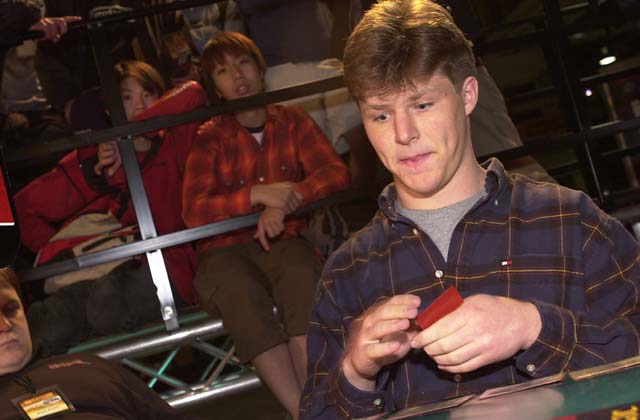 There aren't too many people in the know who would say Jon Finkel isn't the best player on the globe. The man's won a World Championship, a Player of the Year crown, a Pro Tour, a National Championship and an Invitational, so to say his resume is incredible is an understatement. This said, Jon's resume was complete until the inception of the Masters Series, the high stakes tournament circuit featuring the Pro Tour's top stars. With a new goal, Jon has come close to once again rounding out his list of achievements, but in his closest grab at a victory, he was stopped in the finals of Masters Chicago.

He was stopped by Ben Rubin.

At 18, Rubin, a four time Top 8 finisher (to Finkel's nine) himself may be the best player in the world after the legendary Finkeltron. With his win in Chicago this year, Ben was assured that his season would be a financial success, but now he's looking to make history. In five Pro Tour seasons, only three players have won two Pro Tours. The question then is whether Rubin, the hopeful two-time winner, or Finkel, the best of all time, will earn the right to try to accomplish their goals in the finals.

Starting with a Finkel mulligan, both players began the game by playing out Islands, with Jon playing then playing a Swamp on turn two. Ben then took some time advantage by playing a forest and a Star Compass before John played a Plains, joining his turn two Swamp, meaning he had the mana to cast Dromar's Charm. Ben played and Island followed by Jon's Plains, and when Ben played an Island and declared the end of his turn, Jon cast Fact or Fiction, which was promptly countered by Rubin's Spite.

Next, Ben played an Elfhame Sanctuary that was countered by a Dromar's Charm, but this meant that with Jon's lands tapped, Ben was free to play a Fact or Fiction of his own without fear of counter. Jon made two piles, (Global Ruin/Phelddagrif and Restock/land/Collective Restraint, which Ben picked) and when it was Ben's turn again, the Restraint hit the table.

After Jon, stuck on four land, again passed his turn, Ben drew and took a long pause (allowed thanks to the lack of a time limit in the Masters) before casting a second Restraint. Jon, still awaiting the all-important second blue mana for Absorb, again passed his turn, but Ben tried to cast a Harrow, which was countered by another Dromar's Charm.

After his draw step, Ben, knowing he was free to cast a spell without fear of counter, again took a long pause before making his decision. With Restock in hand and a number of strong cards in his graveyard, he had a difficult decision to make before finally casting Restock for Harrow and Fact or Fiction. John untapped, drew and passed another turn before Ben cast Harrow again, with this one resolving, fetching a Plains and a Mountain from the San Francisco native's deck. Now, with twice Jon's mana, Ben played another Island and relinquished his turn, electing to wait until Jon's end step to cast a Fact or Fiction, which he did after Jon finally played a Coastal Tower.

This Fact or Fiction was a tough one, with Spite/ Malice eventually forming its own pile while Star Compass and three land formed the other. Ben finally elected to take the counter, presumably to protect one of his huge threats and then cast Allied Strategies for four, which Jon verbally 'allowed'. Ben drew into his final basic land type, a Swamp and cast Harrow to thin out his deck 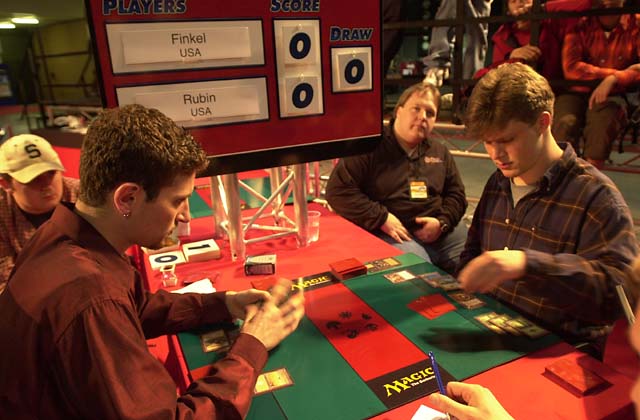 Jon, finally drawing into some mana, played a Swamp and again said 'go ahead', leaving his mana open to try and counter Rubin's threats despite a clear mana disadvantage. Ben cast a Fertile Ground and then a Star Compass and relinquished his turn, as Jon drew and went to discard a Galina's Knight, apparently set on trying to deck Ben. Before the discard though, Ben cast Reviving Vapors, choosing a second Vapors (taking him to 24) over Obliterate and a land, presumably because he felt he could win without decking.

The next turn saw Ben cast yet another Fertile Ground, bringing his total available mana in play to 13 sources to Jon's six. Again declaring his intent to discard, Jon could only watch as Ben gained 8 life off a Spite/Malice, also providing the counter-protection he'd be waiting for. With Ben's deck now less than half the size of Jon's, Ben paused as Jon started commenting on his every move, perhaps hoping the mockery would rattle his younger opponent, forcing a mistake.

Finally, his decision made, Ben cast Global Ruin, attempting to remove some of Jon's mana. Jon countered, but the Spite was waiting and Finkel was again reduced to three land. With Ben's mana advantage now at ten sources to three, he knew that he'd be able to cast threats with Jon unable to muster the power to stop his protective counters. Ben played a land and relinquished his turn, with Ben casting a Reviving Vapors from which he selected a Questing Phelddagrif.

When Ben cast the Hippo, Jon had an Exclude waiting, but again his counter was Spited. With the threat now in play, Jon cast Rout on his turn, which Ben, now with only ten cards in his library, had to consider countering. Ben finally chose to cast Absorb, preparing to go on the offensive.

Ben cast Allied Strategies for five, leaving four cards in his library and an abundance of mana with which to pump up the Hippo. Casting another Fertile Ground, Ben was finally ready to attack, pumping the Hippo four times, reducing Jon's life to 12. Running out of life, Jon cast a second Rout, which Ben allowed only to cast another Hippo the next turn. With Rubin holding five cards (none of which were counters) Jon started counting Ben's green mana sources, making sure it was the 8 he needed to pump the Hippo to 12/12, potentially killing the New Jersey native.

Ben drew into Absorb after Jon Opted and played a Coastal Tower, and finally attacked, pumping the 'Grif just five times, apparently content with trying to kill Jon next turn. Jon then cast Dromar's Charm, meaning Ben had seen through the bluff of Jon's death knell, with Jon gaining five life and untapped, casting Opt and then casting Opt again, with neither initial Option proving useful. Jon finally played a Coastal Tower and said 'go', at which point Ben gave the Hippo flying, pumped it four times and attacked for the victory, with Jon's attempted Malice being countered by the Absorb.

With Jon again playing first, both players began the game with their decks replenished, with most of the creature kill and life gain relinquished to the sideboard. Unfortunately for Jon, he was once again forced to mulligan, finding his six-card hand more agreeable than its predecessor. Rubin, finding himself looking at a one-land opening hand, thought long and hard about whether to mulligan, finally deciding to do so despite a Fertile Ground in hand. Ben looked at the top card of his library after deciding to take six: it was a Forest.

As Ben deliberated his six card hand, Jon asked 'are you doing a pump-fake, Ben?' understanding that Ben was pleased with the results of his mulligan. The game started quickly enough with Swamp, Island, Coastal Tower and Island being played alternatively before Ben cast a Star Compass. Jon drew and cast Opt, keeping a Plains and putting it into play, leaving Ben a window to cast spells without fear of non-Gainsay counters. Ben played a Forest and cast Harrow, sacrificing his Island for a Plains and a Forest. 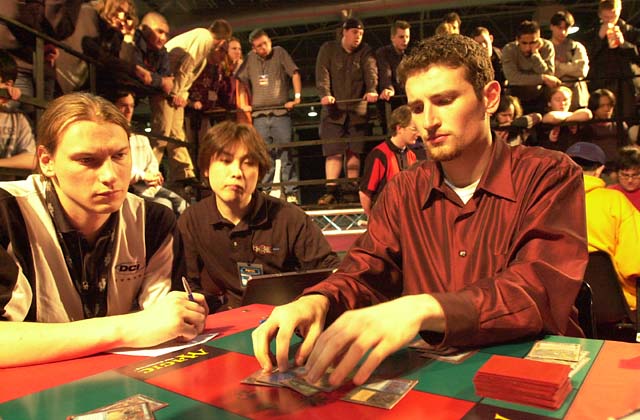 Jon's turn was no more exciting than most of his previous ones, with his drew step closely followed by the end of his turn, failing to play a fourth land. On Ben's turn, the youngster cast Kavu Chameleon, a difficult card for Jon to deal with. Jon's turn saw a draw, an Opt, and an end step, which were followed by the Kavu reducing him to 16. Jon, desperate for some mana against a deck that thrives on destroying it, had to discard a Fact or Fiction before Ben's turn saw the Kavu take Jon to twelve, with Finkel showing obvious frustration at his second game of mana trouble. When Ben said 'go', Jon cast Recoil, which Ben Gainsayed before Jon drew, failed to play a land and ended his turn.

Ben drew and attacked with the Chameleon taking Jon to 8 before Jon cast Dromar's Charm in an attempt to gain five life, effectively adding two turns to his life expectancy. After thinking for a few moments, Ben Gainsayed the Charm and Jon again failed to play a land. Ben attacked, Jon drew again and knowing he wouldn't be able to survive to another draw step, the greatest player in the game's history extended his hand in defeat.

Ben Rubin joins Kamiel Cornelissen in having beaten Finkel in two big money matches this year. He now moves on to the final, where he'll be trying to add another $10000 to the $15k he's already won.