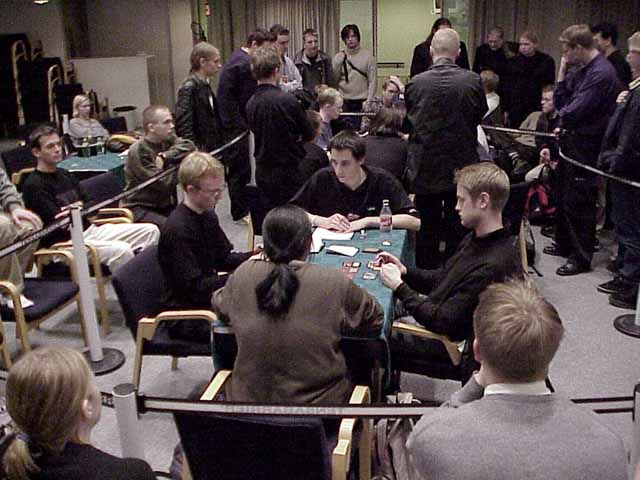 In the semifinals, Erno Ekebom from Finland faced Rickard Österberg from Sweden. Erno has a Pro Tour top 8 performance from 2000 Pro Tour Los Angeles, while Rickard made top 8 in the 2000 Euro Champions - so both are among the best players of their respective countries. "Don't worry if I just pass out," Rickard smiled before starting. The Swede had been fever-ridden throughout the tournament and felt slightly dizzy.

Erno won the die roll and chose to play, and he certainly managed to accelerate his mana. After a turn two Fertile Ground he continued by playing a Harrow so that he had six mana available on turn four - by far enough to play a Duskwalker with kicker. Rickard on the other hand, got a slower start. He played a turn two Rogue Kavu and started attacking, and then he dropped a Hooded Kavu that just hung around by his lands while its Rogue relative did all the work. A Firescreamer also came into play on Rickard's side of the table.

The Finn didn't really like the Firescreamer though, so he Assaulted it and then cast Pouncing Kavu with kicker. He then sent the Duskwalker and the Pouncing Kavu over for a visit, and Richard round himself at 14. Stalling on four lands with several white cards in his hand, Rickard didn't really have a lot of options. He attacked with the Rogue Kavu again, hitting Erno down to eleven, and then he cast Hypnotic Cloud and an Aggressive Urge went to the graveyard.

Unfortunately, Erno had more good cards in his deck. He attacked once again to take Rickard down to eight, and then he added a Climbing Kavu to his offense. Rickard couldn't do anything but attack with the Rogue Kavu, however, he was pretty amazed that the creature had actually done twelve damage to Erno. Holding back the Hooded Kavu he figured maybe he could survive another turn, but Erno had a Plague Spores, killed the Kavu and Rickard's only swamp, and attacked for the victory.

During the sideboarding and shuffling, the two players chatted a little. Erno was happy to learn that both the two finalists would get plaques as he only had a keychain from making top 8 in 2000 Pro Tour Los Angeles. The Finn also wanted to win a duel with his dragon. Rickard on the other hand, complained about Erno's shuffling of his deck. "You don't just crush me, you want to ruin my rares, too?" he said after Erno had sufficiently randomised his deck, but Erno defended himself by stating that riffleshuffling don't ruin the card edges.

Rickard chose to play, but the talented Rogue Kavu from the first game didn't show up in round two. "Now I don't want to draw it," he smiled, "it's just a bad card." He didn't draw it though. He played a turn thee and a turn four Hooded Kavu instead.

On the other side of the table, Erno was doing the mana acceleration trick again. He cast a turn two Quirion Elves, calling red, and then he dropped a turn three Voracious Cobra. "Sh*t! He's f*cking mad!" Rickard complained, and Erno had to agree: "He's f*cking mad." Erno also cast a turn four Pouncing Kavu with kicker, and the two creatures knocked Rickard down to 15 life.

But Rickard wanted revenge, so he slapped a Maniacal Rage on one of the Hooded Kavus and attacked back for six, bringing Erno down to twelve. He also played a Kavu Scout - but all his creatures seemed very small when Erno's Darigaaz, the Igniter hit the table. "Oh, not that thing that destroys lands," Rickard complained - happy though when he noticed that it wasn't a Plague Spores. "Oh, that's okay," he grinned after taking a second look at the card, but he soon changed his mind when he tapped two mana to activate the Hooded Kavus - and discovered that the dragon was indeed black. So instead of attacking, he cast yet another Hooded Kavu and tripleblocked the Pouncing Kavu when it came for a visit during Erno's next turn.

Things looked bad for Rickard, but Erno was at twelve life and he attacked with the two Hooded Kavus for a total of six damage. But Erno had an Agonizing Demise for the one with Maniacal Rage on it, and Rickard scooped.