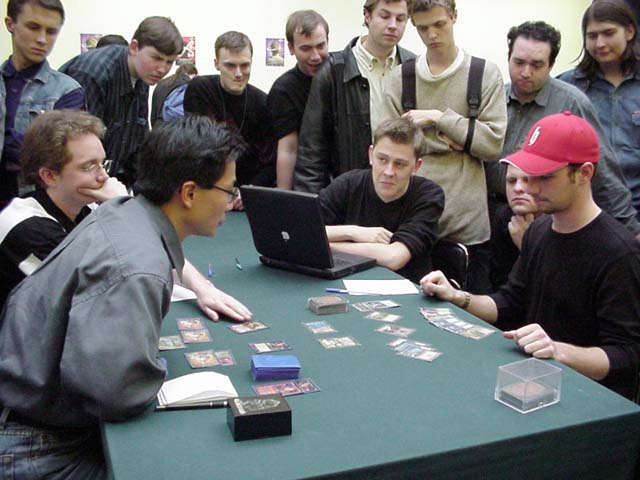 Iwan wanted me to mention the designer of his deck, Torben Twiefel. No doubt he was pleased with his countryman's work, as it had now put him through to the semi-finals of the Grand Prix. He faced up to Yuri Markin playing The Solution.

Iwan had won the die roll, and both players had to take mulligans. Yuri played a Stormscape Apprentice on his first turn, but it appeared that he didn't have a white mana source, as his first three drops were all Islands. Iwan held off on Flametongue Kavu in case Yuri had an Exclude, and contented himself with Ghitu Firing the Apprentice and playing a Nightscape Familiar. Yuri found some sources of white mana, and summoned a Voice of All with protection from red.

Iwan had Urza's Rage and Flametongue Kavu in hand, neither of which could deal with the Voice, so he contented himself playing a Shivan Zombie. Yuri's Fact or Fiction revealed an Exclude, and back-up Voice of All and Crimson Acolyte. He took the Acolyte and Exclude, then played a Meddling Mage naming Void.

Tan tried to cast a Skizzik to race with but of course he had just given Yuri an Exclude. This allowed Iwan to get a Plague Spitter into play and potentially kill the Crimson Acolyte; but it appeared to be too little too late as he was only on 8 life, Yuri had a second Meddling Mage to stop Flametongue Kavu, and a second Voice of All.

Iwan certainly wasn't out of it though, since he used Urza's Rage to kill his own Plague Spitter in his turn, then a Flametongue Kavu to clear Yuri's side of the board. Markin played yet another Crimson Acolyte and another Voice of All. 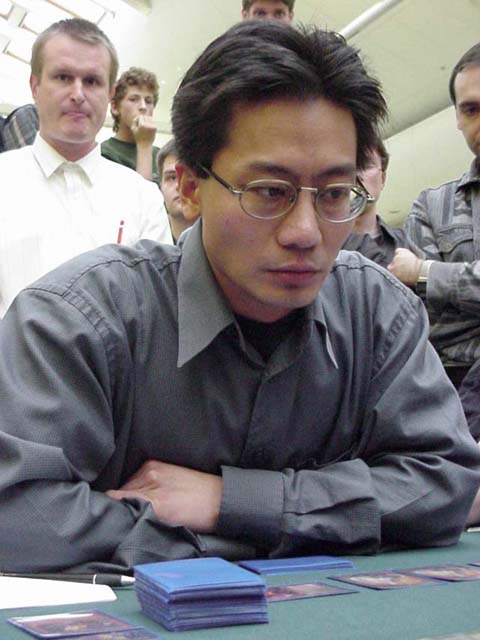 Tan topdecked again with a Plague Spitter that cleared out the Crimson Acolyte and Yuri had a Galina's Knight. The Spitter brought the life-totals to Yuri on 6 and Iwan was on 4, and Yuri had an unblockable Voice of All in play. He used a couple of Absorbs to get out of danger range, and Iwan scooped since he didn't want to die to his own Spitter.

Iwan's opening hand was four Mountains, Blazing Specter, and two Ghitu Fires. He decided to take a mulligan, and his six card hand was much more to his liking.

He played a second turn Shivan Zombie and then a Plague Spitter which killed Markin's Crimson Acolyte and left him with just Meddling Mage in play.

Tan was still short of land, though, and his own play was to take out the Meddling Mage with a Pyre Zombie, and play a second Shivan Zombie. Markin answered with a pair of Galina's Knights - he had five mana in play to Tan's three. At that point, the game appeared to be a straight race since none of the pair of pro-Knights could block the other, but Tan was one turn ahead in the race.

When Yuri summoned a Voice of All, pro-red, Tan attacked with everything which cleared the board and brought the Russian down to three after Markin blocked the Spitter. Tan then used Ghitu Fire to force a third game.

Going second, Tan was - once again - forced to take a mulligan, but his second turn Nightscape Familiar was still the first play of the game. Yuri Repulsed it but didn't counter it when it was replayed.

Neither player played anything as the Familiar beat down Yuri to 16. Yuri even discarded rather than play anything and tap out, as he was stuck on four land.

Iwan's Addle drew an Absorb from Markin, and the German used the opportunity to cast the best card in his hand, Plague Spitter. 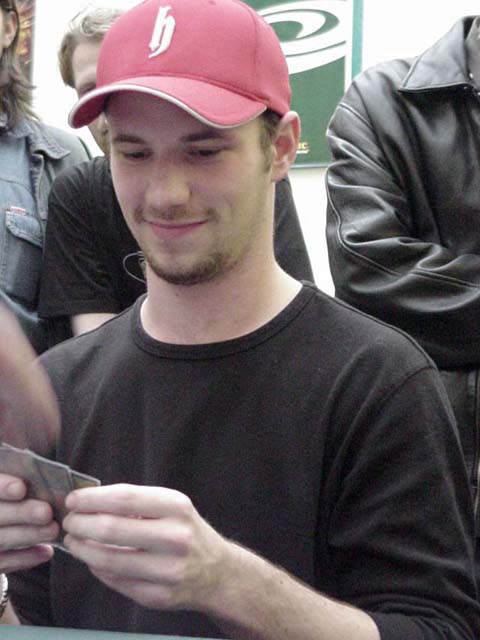 Yuri played a pair of Meddling Mages, naming Flametongue Kavu and Skizzik which did not feature in Tan's hand. Iwan attacked with the Plague Spitter and cast Ghitu Fire to put Yuri on 11.

Yuri attacked back to put Tan on 15, and played a Crusading Knight, but it was also killed by Ghitu Fire. A further attack from the Spitter reduced Yuri to 8 and he was in deep trouble still with only four lands in play when Iwan cast a Shivan Zombie.

Yuri tapped out for yet another Voice of All, and Spitter damage reduced him to seven, and Iwan was on 13. The Shivan Zombie damage put him on five, and Tan finished the match by using Keldon Necropolis on both of his creatures.