Before the match started, while players were shuffling their decks, the more experienced Zvi was smiling a lot and cracking jokes with Jaap Brower who was the judge at the table. The Canadian looked very reserved and was concentrating on shuffling and kept quiet until the match begun.

Jay won the coin flip, and decided to play first. After contemplating on his initial hand for a minute, he says keep and played a Shivan Oasis after Zvi said he's satisfied with his hand too. Jay played a second-turn Thornscape Familiar and started attacking with it while Zvi was building up his mana base by enchanting his lands with Fertile Grounds and Harrowing.

During his fourth turn Jay was able to play probably the best possible creature at this moment, Skizzik with kicker and brought Zvi down to 11. It was apparent that Zvi didn't have an answer to the two creatures, so he tried Allied Strategies for 4 trying to find one. It turned out it was too late anyway, as after the next Jay's attack brought Zvi down to the Ghitu Fire range, which Jay so conveniently happened to have in his hand.

This loss in the first game, which only lasted about four minutes, didn't make Zvi smile any less and he kept his good spirits even after mulliganing twice in this game. Zvi missed his third land drop and had to play Worldly Council during his next turn in order to find and play a third land. Jay dropped a second turn Familiar again and the next turn a Blurred Mongoose. Zvi got down to 14 and was finally able to Harrow so now he had four basic lands and a Fertile Ground in play. 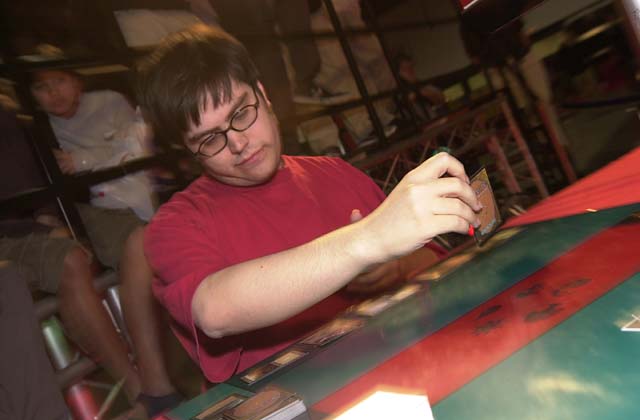 The two creatures Jay summoned continued to beat down and Zvi quickly found himself in the direct damage spell range again, which were what exactly Jay was holding: a Scorching Lava, a Ghitu Fire for 3 and an Urza's Rage brought his opponent to exactly zero life.

"A good job, you shuffle well," said ever-smiling Zvi to his opponent who smiled in response, probably for the first time.