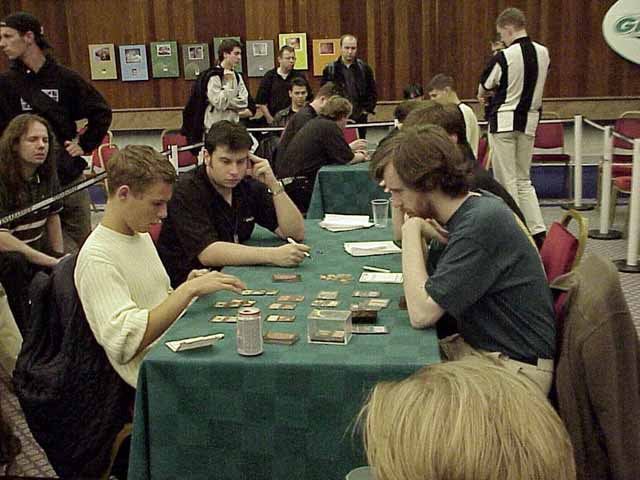 This match involved arguably the 2 best limited players in Europe. Noah is the reigning European champion and also finished top 8 in GP Copenhagen. John O has a PT top 8 and 2 PT ninths. Noah is playing an aggressive 5cG Deck with solid attacking creatures, while John is playing a Black / Blue Control deck with solid flyers and some tricks.

Both players kept their opening hands and on Turn 3 John cast a probe with no kicker, obviously looking for a Swamp. On turn 2 Noah made a Quirion Elves and on turn 4 accelerated his mana insanely with 2 Fertile grounds. John then started making his beat down creatures with an Urborg Drake and a Trenching Wurm, Noah answered with a 5th turn and 6th turn Thornscape Master, before Prohibiting John's kickered Serpent. Noah then made another Quirion Elves and a Rooting Kavu. John made another Serpent with kicker to try and hold off the beats but the 2 overrun masters were too much and John lost on turn 9.

Again both players keep their hands, and John opens quicker with a turn 2 Vodalian Zombie and a turn 4 Hate Weaver. Noah made a Trapper and a Rooting Kavu,, before John made an urborg Drake and a Phyrexian Slayer. Meanwhile Noah is colour screwed and is unable to slow the flying beats. John O recoiled the Kavu to ensure he'd win the race, and Noah died on turn 8.

John again has a very aggressive start with an Urborg Drake, Shoreline Raider, Faerie Squadron and Darigaz's Attendants before turn 8. All that Noah can manage is a fires of Darigaz, a griffin and a rooting Kavu. Noah draws more land on turns 6 and 7, and John uses Cursed flesh on his own Attendan's to beat Noah on turn 8 again.