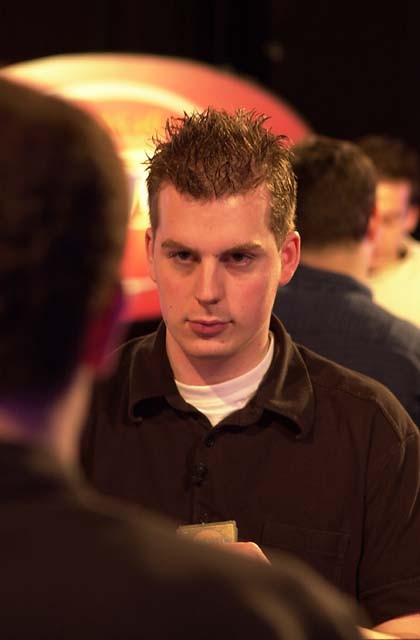 Classically, red/black beatdown has a tough time beating green/red because fat green creatures tend to be too large for the red removal, even if they do topple to the black cards like Demise. What made things worse for the American were the splash white cards in his opponents deck: Armadillo Cloak; Rith, the Awakener; and Armadillo Cloak. Things were by no means a foregone conclusion though as he had a few bombs himself: a 4th-pick Pyre Zombie, Urza's Rage and a Reckless Spite.

The whole match was played in relative silence with only the occasional whoop from the crowd as the bombs hit the table, but the atmosphere crackled as two of the people at the pinnacles of their games faced off for a place in the final. Finkel, the undisputed number 1 player in the world, facing the man who has the highest average individual finish in Pro Tours ever: Kamiel had only played in three Pro Tours to date; his positions being 11th, 2nd and in the semis here.

Finkel won the toss and elected to play first. It was not the fastest of starts though as all he could do by the end of his fifth turn was lay a Pyre Zombie and attack once before a Kavu Runner took him by surprise, followed by a Kavu Climber. If this was not enough to deal with Cornelissen then made a Nomadic Elf and a Crimson Acolyte, so Jon had to deal with the Elf as soon as he could while there were no other white mana sources available to his opponent. First he tries to sac his Pyre Zombie to deal with it, but an Explosive Growth saw that off, so a Tribal Flames had to deliver the finishing blow to the Nomad. Finkel did manage to find some more removal for the two 3/3s on the table (a Smoldering Tar and an Urza's Rage), but Kamiel kept up the beats by making a Pincer Spider and a Serpentine Kavu, Zapping the only blocker left on the table (a Viashino Grappler). Finkel swept having drawn only two creatures in the entire game.

Cornelissen sideboarded out a Quirion Sentinel for a Restock. If he were playing against a faster red/black deck this may have been a questionable thing to do, but Finkel did not have too many turn 2 drops in his deck. 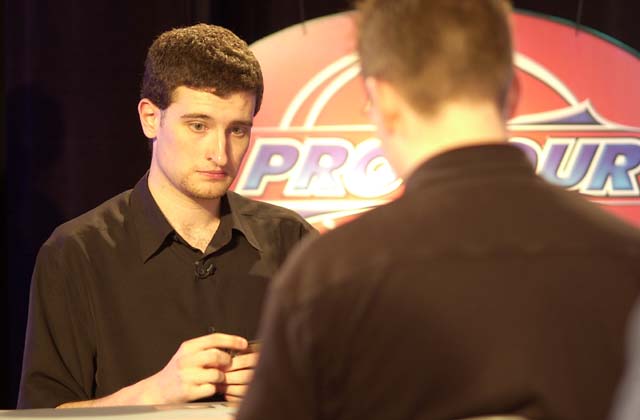 Again Jon played first, and this time he managed to make a turn two drop in the form of a Hate Weaver, then an Aggressor the turn after. This strong start was immediately threatened as a Fertile Ground allowed the Dutchman to make a Quirion Sentinel and Crimson Acolyte on turn 3. The answer was in hand though, as he Soul Burned the Crimson Acolyte promptly then traded his Hate Weaver with the Sentinel, choosing to hold his 3 power Aggressor for later.

Jon could only reduce Kamiel to 12 life before the green player stabilized as fat creature after fat creature loafed onto the board. A kicked Pincer Spider and a Serpentine Kavu were both Plague Spored, but a Kavu Climber followed by two more 'Restocked' fatties made the situation dire for the now creatureless World Champion. As a last ditch effort Finkel casts Reckless Spite to hold off the attack, but it was answered with an equally devastating Rith the Awakener.

Many top Pro Tour players believed that Finkel had been under the influence of mind-altering substances as he made an intriguing sideboarding decision for game 3. Laughing in the face of the Acolyte that had caused him so much trouble in the first two games, Jon sideboarded out his Defiling Tears in favor of a Turf Wound. When I spoke to him afterwards about this he explained that he felt it important to stall Kamiel's mana drops as he held so many 5 mana plays, and that he had a few ways to deal with Cornelissen's white mana base anyway.

Of course, as fate would have it, the first play in this match was a turn 2 Crimson Acolyte and it didn't get any better for Jon from that point. Kamiel managed to finish the game on 18 life as the only spells Finkel cast were Pyre Zombie, Phyrexian Slayer, Viashino Grappler and Ravenous Rats before he died. As you can imagine these small creatures were not enough to deal with a Cloaked up Serpentine Kavu, when a Crimson Acolyte was on the table, so no amount of trickery from the worlds best player could save him from the battering. 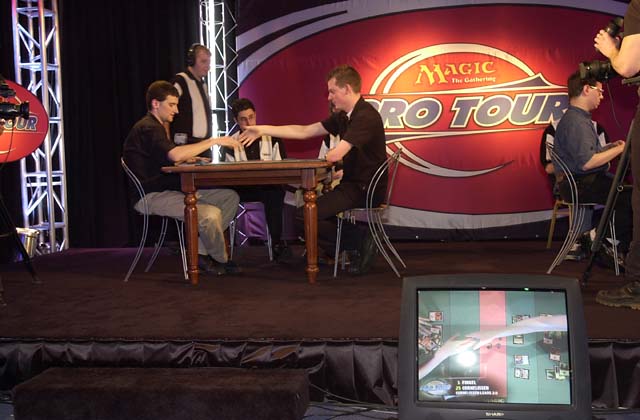 It should be said that despite his draws being nuts (he was only playing 1 Acolyte) Kamiel performed impressively well throughout the match and never gave Jon the chance to get any form of card advantage.

At the end of the game, someone walked up to the stage and said "Guys, if you wanna reuse that playmat you wanna mop up that blood first." Finkel just smiled and walked off with his $13,000.