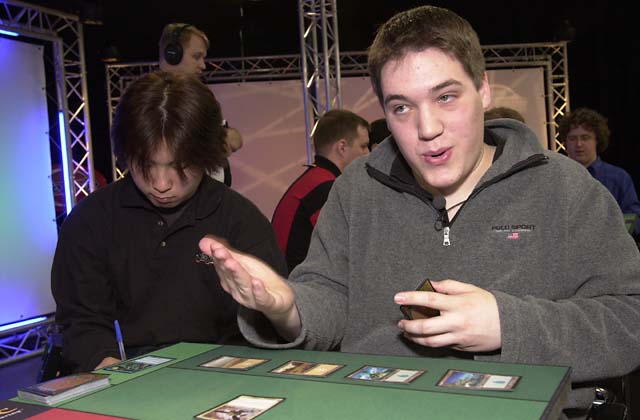 If you are going to play against anyone in the Top 4 of a Pro Tour, might as well make it your roommate! Kai Budde and Patrick Mello are long-time friends who are currently also roommates, and spent a lot of time preparing together for this Pro Tour. Clearly, their preparation worked very well.

Budde opened with a Samite Pilgrim, then Benalish Lancer facing off against a Caldera Kavu. Mello, who had a relatively slow draw began racing with his Kavu, then cast Smoldering Tar.

Budde summoned a Voice of All naming red, and leaving Mello in poor racing position indeed. Mello's only available plays for the turn included casting a Shivan Emissary with kicker on either Pilgrim or Lancer, or summoning a Pouncing Kavu. Mello opted for the Shivan Emissary play, removing Samite Pilgrim.

Mello cast a Chromatic Sphere and attacked with Caldera Kavu. He now had access to green mana, able to change Kavu's color, so that Voice of All could not automatically stop it. Budde blocked anyway. He waited for Mello to change Caldera's color, then used Repulse to bounce it. Mello could only replay his Kavu.

Budde cast a second Voice of All, naming red again. Mello had an Annihilate ready, taking out the Angel and sending over his creatures. The race was a close one, with players tied at twelve life after this attack.

Budde surprised Mello on the following turn by casting his one splash card, Sabertooth Nishoba. Mello could still win - he cast Kavu Aggressor with kicker, and then went down to one life after an attack from Budde's two creatures. Budde was down to ten, and Mello had ten points of damage on the table, so it was clear he had some trick in hand.

Mello cast Pouncing Kavu with kicker and attacked with all of his creatures. Budde cast Pollen Remedy with kicker, preventing more than enough damage to survive the attack.

Mello's opening hand featured Firescreamer, Sinister Strength and five lands - not the kind of draw he would want to keep in this matchup. He took a mulligan. His new opening hand of four land, Terminate, Singe, and Rogue Kavu was much better. Budde's hand was just fine, as it featured three lands, Prohibit, Voice of All, Tower Drake and Pollen Remedy.

Mello had potential for an insane beatdown draw, as he attempted to cast Sinister Strength on his Rogue Kavu. Budde used his Prohibit. Mello attacked for three, used Singe to take out the Tower Drake, and attacked for three more.

The fun stopped by turn four, when Budde cast a Voice of All naming red. Mello proceeded to cast several Kavu, but had no way to deal with the Voice for now. Surprisingly, Voice of All attacked, leaving only a Darigaaz's Attendant to stop Mello's team. Mello used Terminate to blow the 3/3 artifact out of the way, and attacked for seven (using his leftover mana to pump Caldera Kavu). Budde used Restraint to prevent three points of damage from it, and draw a card.

Budde continued to dominate the game on the following turn, when he cast Hunting Drake, sending Caldera Kavu on top of Mello's library. However, he underestimated just how fast and hard Mello's deck can hit. Shivan Emissary took out Hunting Drake, and Mello attacked, bringing Budde down to six life. At this point, Voice of All was forced to stay back and defend.

Mello attacked with all four of his creatures (Emissary, Rogue Kavu, Kavu Aggressor, Caldera Kavu). Budde blocked Kavu Aggressor with Voice of All and kicked Pollen Remedy to prevent the rest of the damage.

Budde cast nothing on his next turn either, and Mello was able to overrun him for the kill. At the end of the game, Budde dropped three cards that were in his hand, showing off yet more lands.

As the two were shuffling for their next game, Mello's last round opponent Yuri Kolomeyko informed the judges that he accidentally ended up with Mello's Phyrexian Slayer in his deck! That meant Mello just played two games with a 39-card deck.

Head judge Thomas Bisballe and tournament organizer Jeff Donais held a brief conference. They felt the mistake was clearly unintentional and allowed the match to proceed, having shuffled the renegade Slayer back into Mello's deck for the next game.

Mello played a turn two Rogue Kavu backed by a handful of removal once again. He used Tribal Flames to kill Tower Drake, then tapped Razorfoot Griffin with Backlash and attacked, reducing Budde's life total down to twelve.

Budde attacked with Razorfoot Griffin and summoned Stormscape Apprentice. Apprentice blocked Rogue Kavu in combat and survived to tell the tale, thanks to Restraint. Mello needed a fifth land to start casting a slew of powerful 5 casting cost cards in his hand, but the deck was not giving. He cast Ravenous Rats and Caldera Kavu, while Budde continued to build his air force with Aurora Griffin and Hunting Drake, sending Caldera Kavu on top of Mello's library.

Getting quite behind on tempo, Mello replayed his Kavu and summoned a Duskwalker without kicker. Budde played Benalish Lancer without kicker, leaving three lands untapped, to be able to activate his tapper or potentially cast the last remaining card in his hand. Mello had Annihilate and Shivan Emissary in hand, but not enough time to cast them before Budde's three flying creatures took him down.

Rage Weaver traded with Sunscape Apprentice early on, but then Mello got his scary combo of creature + Sinister Strength + many removal spells going. He enchanted a kicked Kavu Aggressor, making a 7/4 creature. Budde had nothing but a Benalish Lancer in play, but he was able to Repulse the huge monster, though after taking seven points of damage from it. 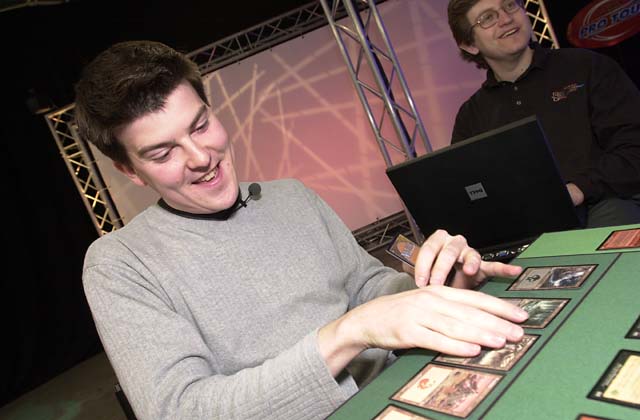 Mello played Caldera Kavu this time, but Hunting Drake sent it back on top of the library. Rather than play a creature, Mello chose to Annihilate the flier. Boy, did that not work out for him! Budde tapped out on the following turn to cast Sabertooth Nishoba - a card Mello could not deal with easily with an Annihilate already in the graveyard.

Mello played a pair of Kavus, used one of them to trade with Benalish Lancer and went down to nine life points, with Budde at fourteen. On his turn, he cast Pouncing Kavu and attacked, but Budde Restrained one of the two Kavu, then attacked on his own turn, making life totals four to eleven. Budde also cast a Benalish Trapper that turn,

Mello was holding Backlash and Smoldering Tar - an excellent draw overall by any standards, but he simply could not deal with Nishoba.

Except that he'd rather concede the match.

Budde called over tournament manager Jeff Donais at the end of the game, asking if it would be legal for him to concede the match at that time. He explained that Mello needed the pro points more than he did (in order to get on the Masters Series), and that Mello stood a better chance of winning in the finals.

His request was declined. Donais explained that DCI does not want players throwing matches to each other in the single elimination portion of the Pro Tour, because it is an important event. Still, it is not every day that you see someone willing to make a sacrifice like that for a friend.