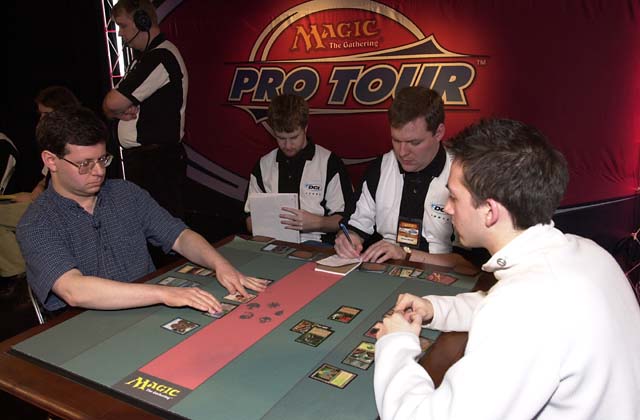 Klauser played first during this game, but had to mulligan his opening hand. He opened with a Forest and a Thornscape Apprentice. Pustilnik was able to follow up and match Klauser's first turn play with an Island and a Stormscape Apprentice. Klauser than played a Plains and ended his turn, tapping down Pustilnik's Stormscape Apprentice during his upkeep. Mike played a Plains to enable his Apprentice, and ended his turn. Klauser continued to build his mana base with an Elfhame Sanctuary, and kept Pustilnik's Apprentice tapped down. On the fourth turn Klauser played an Obsidian Acolyte, which Pustilnik Absorbed.

On the following turn, Pustilnik cast an Ardent Soldier with kicker, bringing out the first combat creature of the game. Klauser answered with his own two-powered creature in Glimmering Angel. On the next turn's upkeep, Klauser yet again used his Apprentice to tap down Pustilnik's Apprentice. Pustilnik played a Swamp, and attacked with his Ardent Soldier. He then increased his army with a Slinking Serpent, which would be able to walk over Klauser's Forests. Things got scary for Pustilnik on the following turn when Klauser played Armadillo Cloak on his Glimmering Angel, and attacked. However, because Klauser had no Blue mana sources, this situation was not nearly as bad as it could have been. Pustilnik took his next turn, Maliced the Cloaked Angel, and attacked with his Serpent and Soldier.

At this point, Klauser had a lack of threats. He ended his turn, and continued to tap down Pustilnik's Apprentice during Upkeep with his own. Pustilnik continued his attack with the Serpent and Soldier, and played a Vodalian Zombie. At the end of the turn, Klauser cast Harrow to get a Mountain. He then followed up on his turn with a Kavu Climber. Pustilnik's turn involved a strong attack, as he sent over Ardent Soldier, Slinking Serpent and Vodalian Zombie. Pustilnik also tapped Kavu Climber before blockers were declared, letting his creatures get through for six damage. He then played a Vodalian Serpent with kicker to increase his defense. Klauser had a strong follow-up turn, playing Tribal Flames on Pustilnik's Stormscape Apprentice. He then tapped down the Vodalian Serpent with his Thornscape Apprentice, played Armadillo Cloak on his Kavu Climber, and attacked for six damage and gained six life.

Pustilnik continued his attack with the Zombie, Soldier and Serpent to take back the life Klauser had just gained. He then played Benalish Trapper and ended his turn. On Klauser's turn, he tapped Vodalian Serpent, and attacked with the Cloaked Climber. Pustilnik had the answer, and bounced the Climber back with Stand/Deliver. Klauser would get to draw another card, but it was a fair trade to remove the Armadillo Cloak. The Climber was replayed, and Klauser killed the Trapper with Lightning Dart. Pustilnik attacked once again with his Zombie and Serpent, keeping the Ardent Soldier back due to the Climber. He then played Ravenous Rats, and Klauser discarded Wax/Wane, which was the only card in his hand. Additionally, Pustilnik also had no cards in hand at this point. With Klauser stripped of resources, Pustilnik easily came through for the last few points of damage needed to win the game. 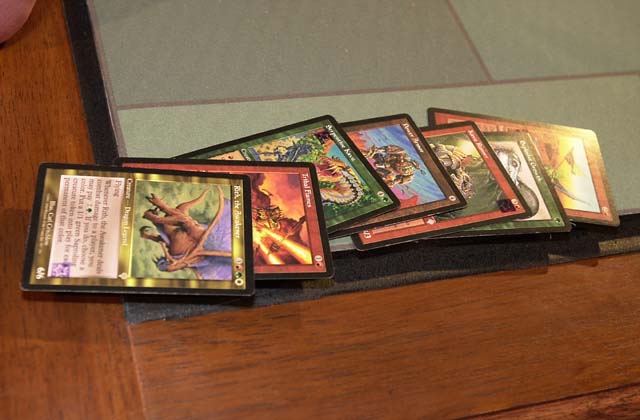 Once again, Klauser played first, and once again he had to mulligan his opening hand. He played a Forest and a Plains, and a two-drop in Might Weaver. Pustilnik played two Plains, and had no cards to play. Klauser attacked with the Weaver, and played a Benalish Lancer without kicker. Pustilnik finally played a creature on turn three, when he played an Island and a Stormscape Apprentice. The tempo advantage was clearly on Klauser's side, and he attacked with the Weaver and Lancer. After some thought, Pustilnik did not block the Weaver, and took four damage. Klauser increased his army with a Glimmering Angel, overwhelming Pustilnik even more. Pustilnik took his turn, played a land and ended his turn.

Klauser cast an Obsidian Acolyte, which was Excluded. The Lancer was tapped during the attack step, and the Weaver and Angel came through for another four damage. Klauser then made his board position even more favorable by playing Thornscape Apprentice. The next turn was not particularly impressive for Pustilnik, as he simply played a land. Klauser declared an attack step, and his Lancer was tapped down. With the path cleared, the Angel and Weaver got through for four damage yet again. Pustilnik made an attempt to stabilize by playing Shackles on Klauser's Glimmering Angel, but Klauser tapped down his Apprentice during the end step to come through for the final points of damage. 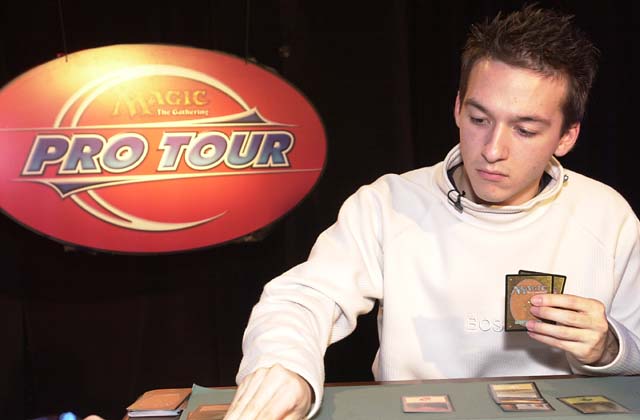 For the first time in the match, Pustilnik got to play first. For the third time in the match, Klauser mulliganed his opening hand. The action started when Pustilnik played a second turn Vodalian Zombie, and Klauser answered with a Nomadic Elf. Pustilnik played a Plains to have one land of every color in his deck in play. He attacked with the Zombie, and played Stormscape Apprentice and Benalish Trapper. Klauser counterattacked with his Elf, and played Benalish Lancer without kicker. The Zombie on Pustilnik's side attacked for another two points, and Slinking Serpent was summoned. Klauser played a Glimmering Angel, and could not attack due to the 2/3 Serpent.

Pustilnik untapped, and was in a good position with the two tappers, but could use a second Plains to fully exploit the situation. He attacked with the Serpent, and played Galina's Knight. Klauser attacked with the Angel through the empty sky, then played an Elfhame Sanctuary and a Llanowar Knight. The Stormscape Apprentice shot Klauser for a point at the end of the turn. Pustilnik attacked with the Forestwalking Serpent, and attempted to play Shackles on the Angel. Klauser responded by filtering a Blue mana with the Nomadic Elf, and made the Angel untargetable. This was an obvious mistake by Pustilnik, and he seemed visibly upset to make such an obvious error in an important match.

Klauser continued to be on the aggressive, attacking with Llanowar Knight, Benalish Lancer and Glimmering Angel. The Llanowar Knight was blocked by Galina's Knight, and Vodalian Zombie blocked the Lancer. All four creatures traded and went to the graveyard, and the Angel came through. Klauser then played a Kavu Chameleon and ended his turn. Pustilnik attacked with his unblockable Serpent, sitting back on his tappers. Klauser's Chameleon was tapped during his attack step, but his Angel and Elf came through for damage. He then filtered a Red mana with the Elf to Tribal Flames the Stormscape Apprentice. Pustilnik responded by shooting Klauser for a point.

The Slinking Serpent continued to be Pustilnik's workhorse, attacking for another two points of damage. The next turn was more of the same, with Klauser catching up in the race. His Chameleon was tapped down, but his Angel and Elf easily came through for more damage. At this rate, Pustilnik was only dealing two a turn while Klauser was dealing four. However, Pustilnik was still far ahead in life points. Klauser was at three, and was forced to only attack with Glimmering Angel. After the attack Klauser cast a second Angel, which was Excluded. On the next turn, Pustilnik played Sleeper's Robe on his Trapper to gain three points of unblockable damage and deal exactly enough to win. 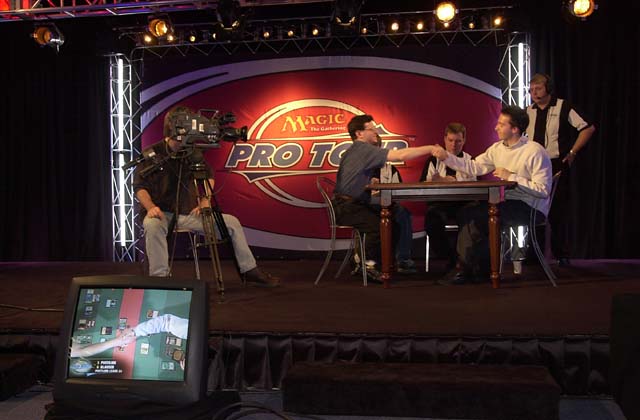 Klauser went first during this game, and for the first time did not have to mulligan his opening hand. He started off strong with a second turn Llanowar Knight, attacked with it on the following turn and played a Pincer Spider. Pustilnik played his first creature in a turn three Galina's Knight. At this point he had a Swamp, Plains, and Island in play. Klauser attacked with the Spider, and then used his mana very efficiently to bring out Might Weaver and Obsidian Acolyte. Klauser's army seemed like it could overwhelm Pustilnik due to sheer numbers, as he quickly played three creatures to Pustilnik's one. He remedied the situation by playing a Faerie Squadron without kicker, which could trade with the Weaver or Acolyte. He also Shackled the Spider to slow down Klauser's offense.

With his ground offense nullified, Klauser went to the air and summoned a Glimmering Angel. On the next turn Klauser re-analyzed his situation, and attacked with Llanowar Knight and the Angel. Galina's Knight blocked its Llanowar counterpart to trade, and the Angel came through the air for two damage. Pustilnik followed up on his next turn with Slinking Serpent, which had gone a long way towards winning him other games in this match. Klasuer untapped, and simply attacked with his Angel through the empty sky. Pustilnik's Serpent attacked back to keep pace with the Angel. This continued for another turn, and Pustilnik broke the game state with a Stormscape Apprentice. However, Klauser had the answer. He attacked with the Angel, then played a Mountain and Lightning Darted the Apprentice. After some thought, Klauser played a Benalish Lancer without kicker, leaving him with no cards in his hand.

Pustilnik continued his attack with the Serpent, and then dropped his bomb in Stormscape Master. On the following turn the Lancer was given protection from Black, and the Lancer and Angel attacked. This brought Pustilnik to 4 life points, while Klauser was at 14. Pustilnik then attacked with the Serpent to bring Klauser down to 12. On Klauser's turn, the Lancer and Might Weaver were given Pro-Black, and attacked along with the Angel. The un-kicked Squadron blocked the Weaver, the Master blocked the Lancer, and the Master gave itself Protection from White. The Angel came through unblocked to bring Pustilnik to 2 life points. The Serpent persisted in its attack to bring Klauser to 10.

On the next turn only Klauser's Angel attacked, and Pustilnik responded by shooting with the Master to stay at two life. This also brought Klauser to 8. Klauser played Obsidian Acolyte, but it was Excluded. The following Llanowar Knight was Absorbed, giving Pustilnik a more comfortable life total for his current situation. He followed up on his turn by casting Probe without kicker to cycle to better cards. He discarded Sleeper's Robe and Island, and attacked with the Serpent and Spirit Weaver. Klauser sensed that the end was near, but attacked with his Angel anyway, and was shot by the Master at the end of the turn. During Pustilnik's turn he played Sky Weaver and gave the Spirit Weaver flying. This made the Weaver and Serpent both unblockable, to deal fatal damage to Klauser and bring Pustilnik to the finals.