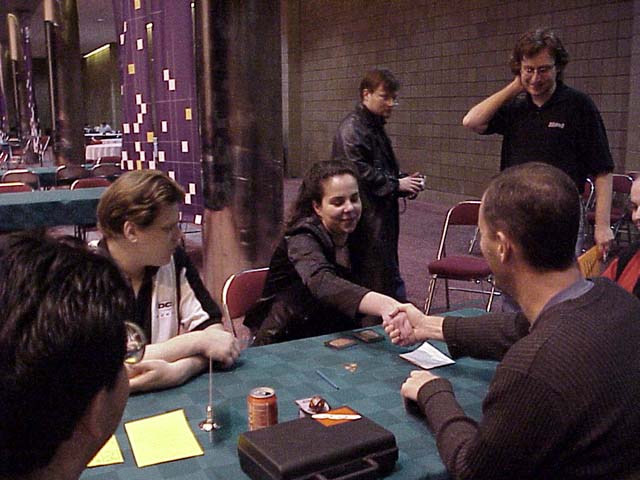 Rush has played in several Pro Tours but had no high finishes up until now. This tournament really went his way though - he has not lost a match up until now, winning enough matches to intentionally draw twice into the Top 8 - with only one bye! Michelle Bush dominated the sealed deck portion of the tournament as one of the few undefeated players on day one - with no byes at all. She then won several draft rounds and was also able to draw in.

Each player has a Dragon in their deck. Rush is playing a B/U/w strategy with Dromar. Bush has a solid R/B deck, splashing green just for Darigaaz.

In the first game, Rush did not have a very good start. Although he was able to Prohibit a Shivan Zombie, buying himself a bit of extra time, most of the spells in his hand cost six mana. He was trying to play catch-up, trading his Darigaaz' Attendant for Firescreamer, then finally casting a Goham Djinn. Bush amassed an impressive army of 3/3 creatures in play, but was unwilling to trade one of them by attacking with everything. She did do that once, on a turn when she drew a Stun and could prevent Djinn from blocking. On all other turns, she sent in a Battleflies. Phyrexian Battleflies appeared to be the MVP of Bush's deck that game. They kept on dealing damage (a total of 11 by the time the game ended), were Recoiled once, and sent back to her hand one other time.

Rush was holding a pair of Galina's Knights and had a Stormscape Apprentice in play for a very long time, but did not draw Plains until very late into the game. Just when the situation was looking truly desperate for Rush, he drew one of his very best cards - a Distorting Wake. With seven mana in play, he was able to unsummon all of Bush's creatures and attack with his Djinn and Galina's Knight, bringing her down to eight life points. 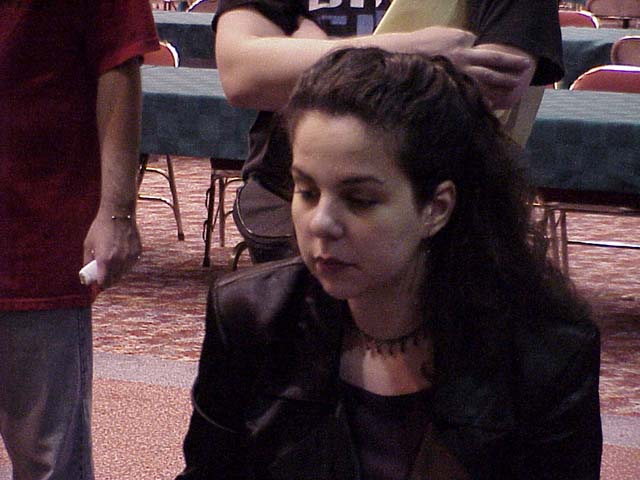 With plenty of mana in play, Michelle replayed a bunch of creatures on the following turn. She chump-blocked the Djinn just long enough to find a way to remove Rush's only flying creature - a Metathran Transport. With Rush at five, she was able to attack with the Battleflies yet again, then Zap and Tribal Flames him out of the game.

The second game started in an almost identical way to the first. Rush played a first turn Tidal Visionary yet again and neither player cast a creature till turn four, when Rush used a Prohibit to counter a Firescreamer. Bush summoned a Duskwalker and an Ancient Kavu. Rush took some damage while getting a Vodalian Serpent, a Dream Thrush and a Goham Djinn into play. Bush used her Soul Burn to remove Goham Djinn while Rush was still tapped out. She then summoned a Pouncing Kavu, holding back the Serpent and attacked with Duskwalker.

Rush used his Distorting Wake to return all three of Bush's creatures to her hand. He then used Dream Thrush to turn one of her lands into an Island and attacked with Vodalian Serpent. For the next few turns Vodalian Serpent kept the pressure on. Bush was trying to race it with a Duskwalker, using Shivan Zombie as a chump blocker for a turn, and then taking the damage from it again and going down to four life. Just when Rush thought he had the game locked, Bush used Defiling Tears to destroy the Dream Thrush. Rush's giant 6/6 monster no longer posed a threat as it could not attack, not block the Duskwalker. Bush was still in trouble however. Down to four life, and with Rush at 8, he cast a Tower Drake, putting Michelle on a two turn clock.

At this point Bush surprised her opponent by casting Stun on his Serpent (with only a Duskwalker in play). She then cast Cauldron Dance, targeting Shivan Zombie in her graveyard and an Ancient Kavu from her hand. Rush was forced to block the Zombie with his Tower Drake and still go down to two life, within striking distance of the Duskwalker. Rush fought on valiantly. He used Wash Out and Recoil to keep bouncing the Duskwalker, but finally ran out of answers. Bush cast both Duskwalker and Cinder Shade while down to two life herself. Is there anything Rush could draw? 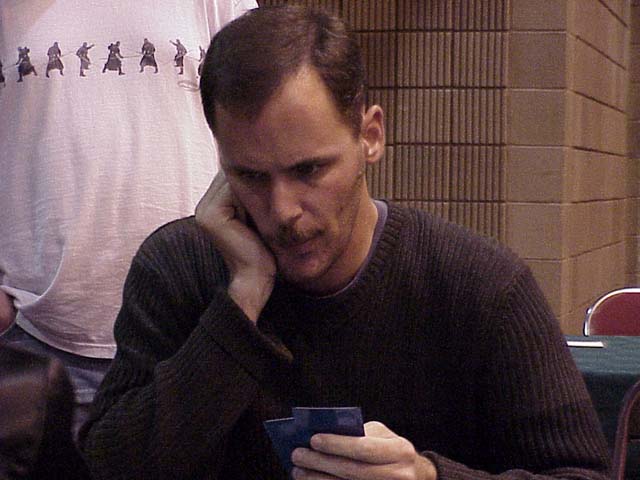 Bush only had four black mana, so she could not pump the Shade enough to take out the Dragon, so Rush would be able to attack for the kill on the following turn. He cast the Dragon, hoping fervently that Bush will not draw a Swamp. No such luck.

Bush drew that Swamp, causing Rush to literally cry out in despair. Although the spectators have been very respectfully quiet during the entire long match, this drew quite a bit of laughter and jokes about losing to a topdecked Swamp. To give credit where it is due, Gary Rush was far from a sore loser. In fact, he initiated some of the jokes.

In fact, I was extremely impressed with both players. Bush, while obviously nervous, handled herself extremely well, played flawlessly and spent most of the time quietly concentrating on the cards. Rush, who had some poor draws in game one never once complained, remained cheerful and friendly throughout the match and was generally very pleasant even while color-screwed a bit for a while in game one.