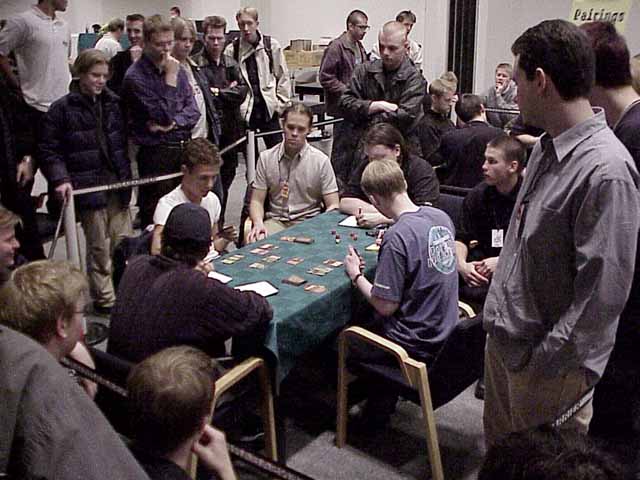 Arto won the die roll and chose to play, however the first spell to be cast was Noah's Yavimaya Barbarian. Arto cast a turn three Kavu Aggressor and a race began. Noah summoned a Viashino Grappler but that was merely a target for Arto's Zap. A turn 4 Llanowar Knight from Noah enabled him to continue the pressure but when Arto cast an Alloy Golem and named white it seemed as though he would be able to stall the ground. Noah attacked with all his creatures next turn, his Llanowar Knight became blocked and after dealing its two points and being backed up by a Scorching Lava to finish off the golem, was replaced by another Llanowar Knight. After Arto drew his next card and realised he couldn't stop Noah's creature assault he conceded.

Arto once again elected to play and after Noah mulliganed, Arto summoned a first turn Urborg Skeleton. Noah then played one of the numerous Llanowar Knights in his deck on his second turn rendering the regenerating Skeleton useless for the time being. Arto failed to cast anything on his third turn but Noah didn't, summoning a Yavimaya Barbarian. Arto plays a Phyrexian Slayer on his turn 4 which blocks after Noah attacks on his next turn. Noah casts yet another creature, Angel of Mercy, having laid land on each turn while Arto has not been able to find a much needed mountain to cast any of the spells in his hand, in Noahs end of turn step Arto Agonizing Demises the Angel but still fails to draw a land and can only pass the turn to Noah.

A Pincer Spider "With KICKER", was Noahs announcement in his next turn as he continued the pressure on Arto. Finally Arto draws a mountain and immediately Scorching Lavas the Llanowar Knight creating a ground stall and apparently giving Arto a fighting chance after the initial lack of land. Noahs' Viashino Grappler was once again targeted by a Zap but that was the only spell cast in Artos turn and as such he was without any defence after Noah cast Scorching Lava "with KICKER" on the Urborg Skeleton and attacked with the Pincer Spider, however Darigaaz, the Igniter was a very good creature to summon on Arto's next turn and it seemed like the tide of the game could be turning in Arto's favour. The next turn showed that it was not to be as Noah cast the card that he had held in his hand the whole game waiting for a second forest to cast it. Verdeloth the Ancient! "With KICKER 3", it gave Noah more than enough pressure to finish the match with a Scorching Lava.