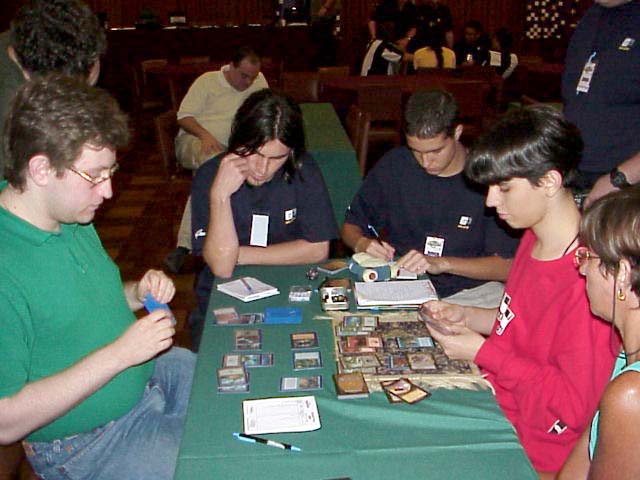 Having drawn with his good friend Carlos Romao in their twelfth round Feature Match, Rafael found himself in the semifinals facing the possibility of meeting up with him again to fight for the title of Champion. The chance excited the young Brazilian, as they did exactly that at GP Sao Paolo. He looked nervous, but ready to play.

Alex Shvartsman is also no stranger to the Top Eight of a Grand Prix. The world-traveler has garnered quite a reputation in the Magic community, earning the title "King of the Asian Grand Prix". Alex's presence in the semis today shows that no matter what Hemisphere he plays in, he's a force to be reckoned with.

In the first game, Rafael started in a quite impressive way, finishing it quickly but painfully. He managed to play loads of creatures like Shivan Zombie, Duskwalker and Lava Zombie and kept removing Alex's blockers with his Terminates and Plague Spores; Alex couldn't do much.

But then, in the second game, Alex managed to control the match from its beginning. His smallish creatures (Ravenous Rats, Tower Drake) dealt a considerable amount of damage, using his creature removal to keep the race in his favor. When Alex played his Crypt Angel Rafael conceded the game because he had finally run out of answers, and was overwhelmed by Alex's larger creatures.

The third game was the longest of the match. It started slowly, with lands being played in both players first three turns. Then Alex played Ravenous Rats and two Tower Drakes beginning the beating. Rafael that tried to slow Alex's advance by killing his Drakes with Tribal Flames and Terminate.

Rafael seemed to calm down and consider his play more carefully. He cast Duskwalker with kicker, preventing Alex's attacks. The tide turned further with the Lava Zombie he played next. Alex took a hit from the Zombie, and then seized control with Collective Restraint and Crypt Angel.

Rafael tried to balance this move by playing out his hand of Tidal Visionary and Duskwalker (with kicker), hoping to sneak past Alex's black creatures with the combo. However, he was under incredible pressure from the Crypt Angel. He had enough mana to send in the Duskwalker, and develop his army with Lava Zombie, which looked good for him. Unfortunately, Alex had a pair of Sleeping Potions. The Visionary freed his creatures, but Alex had bought enough time to deal lethal damage with the Angel.