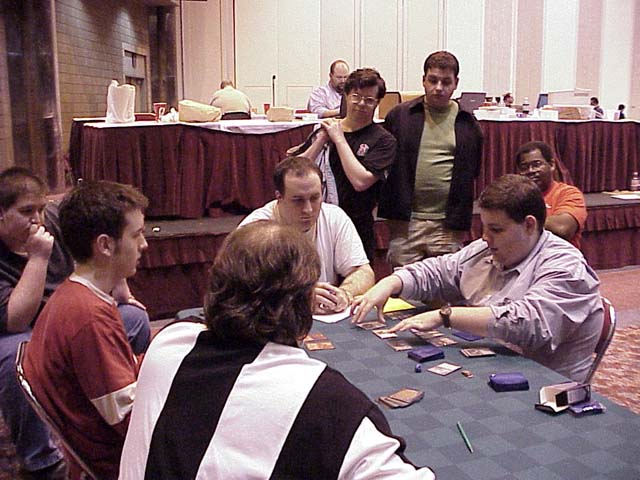 Bill Stead is a little-known player from Tampa, Florida. He's done well in a number of PTQ's, but only made the trip to one Pro Tour, Dallas. He doesn't follow the Pro Tour too closely and isn't familiar with its stars. It's up to Steve O'Mahoney-Schwartz to educate him in this, the first of two semifinals.

Game 1 saw OMS, a former PT champion, start out with a strong draw, seeing his first turn Sunscape Apprentice and second turn Spirit Weaver joined by a third turn Apprentice. While his opening hand was great, SteveO's draw step was less than thrilling, with his first five turns seeing him draw only land. Stead, meanwhile, having mulliganed, wasn't able to muster a spell until his fourth turn Ancient Kavu, which was promptly tapped so SteveO could attack with his white creatures, taking the 17 year old Stead to 9 before casting Rith, the Awakener.

Fortunately for Stead, he had his deck's best answer in the form of an Agonizing Demise. He was then able to follow this with a second Kavu and a Plague Spores on the Apprentice, establishing board parody. It was then that the game went into top-deck mode, and SteveO was able to outdraw the Floridian, drawing a Kavu Climber two turns later. Two more turns after that, and the game was his. 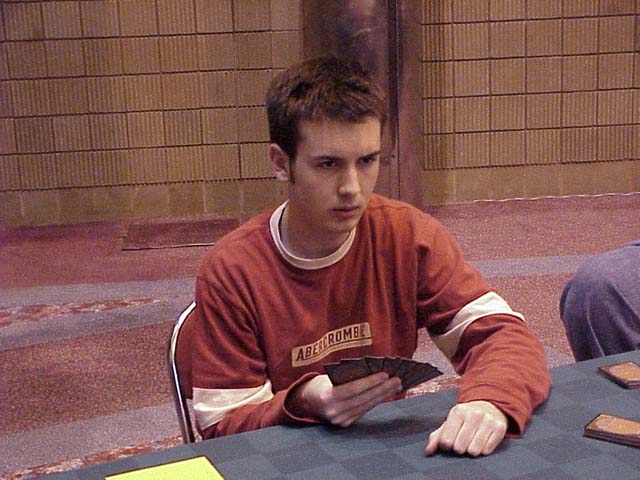 Game two was SteveO's time to have mana problems. While the three-time GP champ was able to cast a second turn Utopia Tree, and a third turn Razorfoot Griffin, his mana supplies stopped there for far too long. Stead was able to cast a second turn Shivan Zombie followed by a third turn Kavu Aggressor, and was able to keep the pressure on eventually casting Maniacal Rage on both creatures. SteveO tried to mount a comeback, casting Armadillo Cloak on a Charging Troll, but Stead had the best possible answer: a Plague Spores killing the Troll and a Forest enchanted by Fertile Ground. Two turns later, the board was swarming with Stead-controlled Kavus and the game was over.

Game 3 saw Steve O, playing first, started things off with a tap land, followed by a second turn Thornscape Apprentice. Bill started off even faster, playing first turn Battleflies, second turn Shivan Zombie. After Steve played a land and said go, Stead, after having his Zombie tapped, cast Kavu Aggressor, seemingly taking the advantage. SteveO, with two sac lands in play, then had a lot of contemplating to do, having to decide whether to cast one of his two Benalish Emissaries With or without kicker) or Serpentine Kavu. Finally saccing a land to cast a kicked Emissary, targeting Stead's lone Swamp (The Floridian hadn't played a land on turn 4), Stead top decked a second, casting a Hooded Kavu. 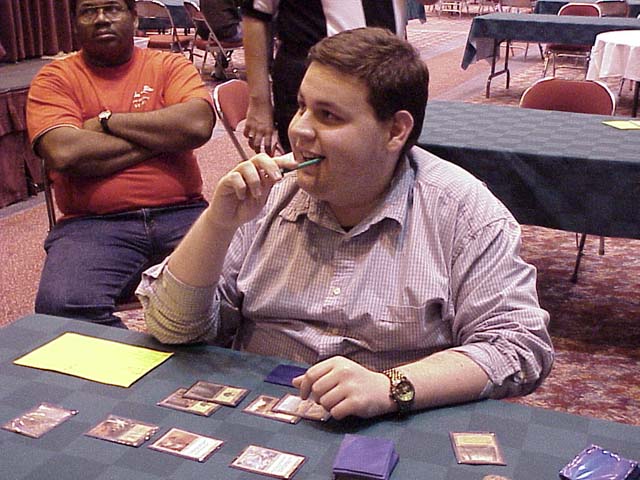 After Steve passed played a land and passed his turn, Bill drew into another land, a Mountain. After casting a second Hooded Kavu and taking OMS to 17, SteveO played his second Emissary, destroying the second Swamp. Unfortunately for the PTLA4 champ, Stead drew his third (of seven) Swamp and continued to attack with one Hood, taking SteveO to 15. SteveO then continued to solidify the table, casting a Serpentine Kavu, but Stead has a surprise waiting in the form of a Scorching Lava for Steve's Thornscape Apprentice.

The Hooded Kavu continued to do its damage, taking SteveO down to nine. After attacking with the Serpentine, Steve played a 3/3 Ruham Djinn. On his turn, it was Stead attacking back with a Hood and the Shivan Zombie, after which, with his opponent at 5, he remarked "did I miscount there?" and relinquished the turn.

After a long period of though, SteveO attacked with the Serpentine Kavu and the Djinn, taking the score to 5-12 in Stead's favor. Stead, attacking with the Zombie and a Hood, took Steve to 1 and cast Breath of Darigaaz, winning the game, the match and advancement to the finals. There, he will try beat Gary Rush, or stop Michelle Bush from becoming the first woman to win a Grand Prix.