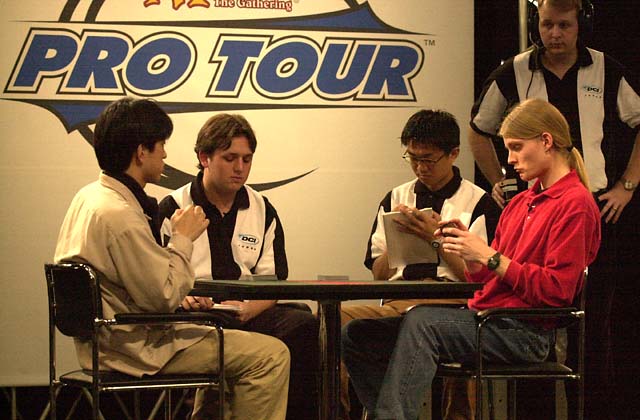 Opinions were split about who had the advantage in this matchup. Many believed that because Fujita had optimized his maindeck to combat Black/Red control he would be ill-prepared to face Hager's Red/Green creature deck. Among the reasons for this were the large number of burn spells in Hager's deck, and the lack of permanent solutions to creatures in Fujita's.

However, not only is the match best three out of five, giving Fujita four games with Nightscape Familiars, more Phyrexian Scutas and a pair of brutal Spinal Embraces, Fujita also defeated a number of similar decks on his way to the Top 8. Regardless of material advantage, you can bet the crowd was rooting for Fujita.

Fujita played first, an enormous advantage in this tempo-based matchup. It didn't hurt that Hager mulliganed. Fujita Addled away a Kavu Titan leaving another behind to enter play the next turn. He had no play on his third turn and took two from the monster.

Hager tried to kick up a Thornscape Battlemage for damage, but it was Excluded. Fujita dropped to sixteen from the Titan. When he passed his next turn, Hager played an end-of-turn Raging Kavu, baiting Fujita's countermagic. Fujita bit, and Prohibited.

This gave Hager a window to do something terrible. Kavu Runner, Skizzik, even just another bear to turn up the pressure, any of them would have been excellent. He had nothing. Fujita untapped, Recoiling his Titan, and then Addling it away. Hager was left with only a Forest.

He topdecked Kavu Runner and attacked. Fujita fell to eleven. He played out an Urborg Shambler and traded it for the Runner. He untapped and dropped Yawgmoth's Agenda. With such a packed graveyard, Hager would need to draw Urza's Rage or Ghitu Fire before Fujita found an Undermine.

Hager had no play on his next turn. Fujita brought out the Shambler. A Raging Kavu forced him to trade it. He cast Fact or Fiction, searching for offense. He found it. The cards were Urborg Shambler, Yawgmoth's Agenda, Addle, Phyrexian Scuta and a land. He got the Addle and Scuta.

Fujita went so far as to kick the Scuta, falling to eight. Hager played a Blurred Mongoose. Fujita decided to race. He Addled for red and missed, but saw a land and Thornscape Battlemage. The two traded swings, and Hager didn't play the Battlemage because of the Prohibit in Fujita's graveyard. Next turn it was Addled away.

Hager knocked his deck, asking for something. He needed a Rage to win the race, but even that would lose it for him if Fujita held double-Undermine. He swung with Mongoose, knocking Fujita to 4. Fujita Recoiled his Agenda at end of turn, opening up his ability to play two spells. He attacked. Hager fell to five. Hager untapped and played Kavu Titan. It was Undermined. He had Kavu Runner waiting in the wings, and when it went uncountered it looked like he might take the game. Hager attacked with both creatures. Fujita tapped four and Maliced the Runner. Hager scooped. 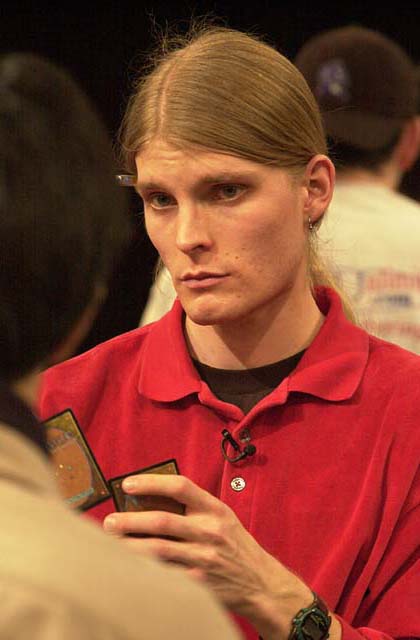 Fujita sideboarded heavily for Game 2. He needed to bring in Nightscape Familiar to hold off Hager's many ground creatures, as well as more Scutas to double as offense and defense, and the gamebreaking Spinal Embrace. He took out his Fact or Fictions, figuring he needed to spend his early turns reacting to Hager's creatures. He also took out his Shamblers, as they would kill his best early plays.

Hager, by contrast, merely traded his Raging Kavus for Overabundances.

He had to mulligan again this game, and was somewhat unhappy with his second hand. He didn't have any early creatures, but reacted well to his opponent's Nightscape Familiars. One of them met an Urza's Rage, and the other died to a Thornscape Battlemage.

Meanwhile, Fujita kicked up a Phyrexian Scuta, a heavy hitter against Hager's lowly 2/2. Hager untapped and laid Overabundance, followed by Kavu Runner. He held back in the face of the Scuta.

Fujita played his third Familiar and hit with the Scuta. Hager fell to thirteen. Hager counterattacked and Fujita did not block, dropping to eleven. Hager went for the gusto, aiming a Ghitu Fire for nine at Fujita and taking five from the Overabundance. When Fujita Undermined the spell Hager stood at five, just low enough to die from the Scuta's next hit.

Hager's Game 3 hand was as bad as the two he had already folded. His six-card hand was a vast improvement.

Hager played first, leading with Blurred Mongoose. Fujita Addled him for red, taking Urza's Rage and leaving behind another Mongoose and two Ghitu Fires. Hager played out the second Mongoose. He didn't lay a third land, but it didn't seem to hurt him too much because Fujita had drawn neither Nightscape Familiar nor Ravenous Rats.

Fujita fell to fourteen and then kicked up a Phyrexian Scuta. Hager had drawn a third land, but would need another or an Urza's Rage to break through the beast. He attacked with both his creatures and one died to the Scuta. Hager played the land he had just drawn and removed it with Ghitu Fire.

Unbelievably, Hager had to mulligan a fourth time. His poker face held fast, and he kept his next six.

Fujita opened with Ravenous Rats, an amazing play against Hager's deck. Hager showed just how great it was when his first play was a Thornscape Familiar. Fujita swung with the Rat, than played another after combat.

Hager made way for two damage with Ghitu Fire, summoning a Mongoose. Fujita's rejoinder was brutal: A kicked Scuta. Hager made no play on his next turn. Fujita Recoiled his Familiar and attacked with the Rats. His conservative play drew the wrath of the commentary team as they expected the Scuta to hit the Red Zone.

Their disbelief magnified when Hager Raged the Rat. Said Randy Buehler: "I don't understand this turn at all!"

Hager untapped and attacked with the Mongoose, stuck at three land. Fujita took it and returned the favor. Surprisingly, Hager fired a Rage at him at end of turn, knocking him to eight after attacking with his Mongoose.

However, after taking another hit from the Scuta he was convinced him to hold the Mongoose back. When Fujita attacked with the Scuta, he blocked and tried to remove it with his remaining Rage. Fujita Repulsed to save it.

The scores were even at eight apiece. Hager dropped Overabundance. Fujita let it enter play, then cast Fact or Fiction. Though he only had three land, he could have spared himself a point of damage by floating two mana before the Overabundance resolved. The commentators expressed concern that this one minor misplay could cost Fujita the game. 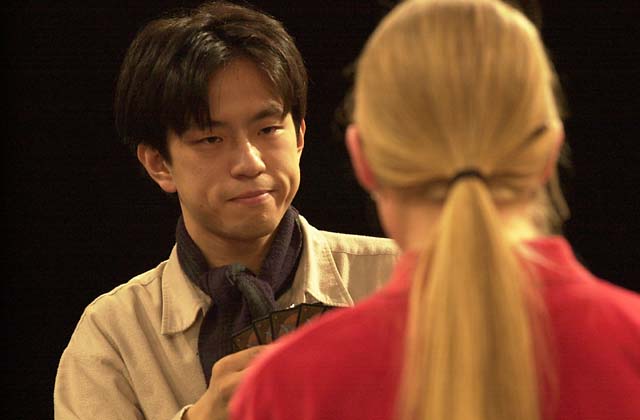 Regardless, Hager had to split two Scutas, a Recoil and two lands. Fujita received the Recoil and lands. On his turn he dropped to four to Recoil the Overabundance. Hager thought for awhile before throwing it in the graveyard. Fujita tapped a few more mana and played an unkicked Phyrexian Scuta.

Hager played his fifth land, opening up the possibility of a game-ending Ghitu Fire. He shook his head, saying "You should have kicked it," and played Flametongue Kavu, removing the Scuta and looking to win the game with his next attack.

The crowd went berserk when Fujita tapped six to Spinal Embrace the Kavu.

Not only did he hit Hager for four, but he gained two life and eliminated the threat. Hager knocked his deck in frustration. It gave up a Kavu Runner which put Fujita at three.

Fujita untapped and laid out the Agenda. Hager looked through his graveyard and all he could say was "very nice," knowing just how bad it was for him.

Fujita Recoiled the Runner when it attacked. Hager then replayed it. Many of the spectators thought this was a mistake, giving Fujita a chance to Spinal Embrace again. An alternate plan would be to wait him out, hoping to draw Urza's Rage.

When the dust settled, the scores stood 6-1 in Fujita's favor. His face broke into a smile for the first time in the match, sensing that the finals were in his grasp. After Hager passed his turn, Fujita played a lowly Ravenous Rat out of his graveyard.

Hager drew and murmured "How can I possibly win this game?" He displayed the Shivan Oasis he had drawn. Fujita turned his Rat sideways to win the match, becoming the first-ever Japanese Pro Tour finalist! Applause and cheers filled the hall.