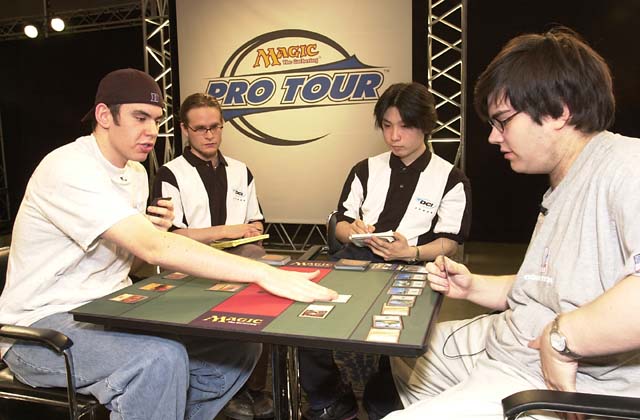 The semifinal match between Zvi Mowshowitz and Chris Benafel is only the second time this pair has been matched up. The last time they played was at the 2000 U.S. Nationals, where Benafel tore up Zvi's Replenish deck with his Ponza deck. "It's my turn to win," said Zvi to Benafel as they entered the match. "You've had your turn."

Mowshowitz was playing a metagamed Blue/White aggrocontrol deck, designed to beat Red-based decks like Benafel's. Team AlphaBetaUnlimited.com's Green/Red deck was definitely a superior version however, taking three other players besides Benafel into the Top 8.

Mowshowitz started the first game as the aggressor. His Meddling Mage begins the attack for several turns before it is killed by an ambush from a Raging Kavu. Benafel begins his first attempts to mount an offensive with a Kavu Runner and a Blurred Mongoose, but he is only able to get the Mongoose onto the table.

Zvi starts to take control on the next two turns, laying a pair of Voice of All, naming Green for both of them. Zvi doesn't have countermagic mana available for these turns, and it gives Benafel a small window to get a kicked Skizzik onto the table if he can draw a land. He doesn't draw the land, however, and soon, Zvi is on the offensive with his Angels, with plenty of mana open for countermagic.

Benafel's next few attempt to get through with anything was met by more countermagic. Zvi allowed several spells, but dropped a few small creatures to hold back on defense against Benafel's small creatures. Zvi ended the first game with one decisive all-out attack, and they moved on to the next game. 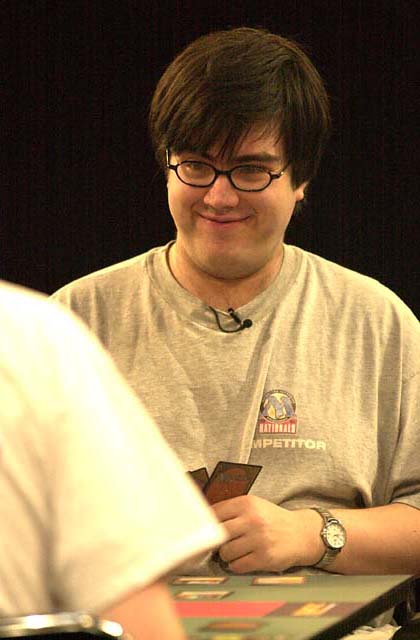 Benafel came out strong in the second game. Raging Kavu and Kavu Titan came out right away, and Zvi's Crimson Acolyte was blown away by a Thornscape Battlemage. Zvi dropped a Meddling Mage, naming Ghitu Fire, but he threw it in the way of the onslaught. Benafel dropped a Jade Leech, and though Zvi had a Repulse, he was too far behind, and they moved on to Game 3.

Benafel started out slow, with a Titan and a Battlemage, with Zvi merely developing his mana base. On turn four, Benafel looked at Zvi's side of the table and debated whether or not to drop a creature, fearing an Exclude from Zvi. Finally, he ended his turn, and Zvi cast his Fact or Fiction.

"That's disgusting!" exclaimed Benafel as he looked over at Zvi. "It's like the worst thing that ever happened to me."

Eventually, Benafel settled on giving Zvi a choice between Galina's Knight and Crimson Acolyte or Galina's Knight, Meddling Mage, and Absorb. Zvi swept up the bigger pile, and started throwing out creatures to trade with Benafel's.

Benafel tried to recapture the advantage with Flametongue Kavu and Thornscape Battlemage on Zvi's blockers, but each time he was met by countermagic. After trading the board clear of creatures, Zvi cast another Fact or Fiction, this time picking up a Voice of All and another Fact or Fiction. The Voice started bringing pressure on Benafel, and the last Fact or Fiction from Zvi brought a some more small creatures to Zvi's hand. Overwhelmed by the card advantage, Benafel soon conceded to go to the next game.

For the fourth game, Benafel started strong with a Kavu Titan and a Raging Kavu. Zvi threw an Apprentice in front of the Raging Kavu, and Benafel waited a turn to drop two creatures past Zvi's countermagic. Zvi Excluded one, but the second hit the table. On the next turn, Benafel considered casting a Skizzik with his attackers, but decided to wait again, and at the end of the turn, Zvi once again cast Fact or Fiction, picking up a Meddling Mage and Voice of All. 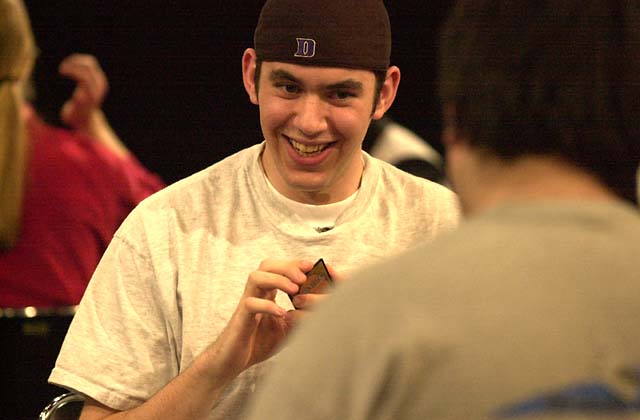 The tide started turning here. Zvi traded his Mage for Benafel's Battlemage, and then dropped a Voice of All. Benafel tried to push past the Voice with Skizziks and Flametongue Kavu, but couldn't quite make it happen. Another Fact or Fiction gave Zvi a handful of small creatures that quickly hit the table.

First drawing a Mountain, and then a Thornscape Familiar, it was not to be. Zvi Mowshowitz plowed over Benafel's few defenders to move on to the finals versus Japan's Tsuyoshi Fujita.