two players are developing quite the history. While they had never played each other in a Pro Tour before this week, in this tournament alone this will be their fourth battle. Their match record is a complete tie at 1-1-1. In Standard, Tomohiro Kaji was victorious. In draft, Katsuhiro Mori was the winner, and in Extended, they fought to a draw. This matchup would determine a victor in more ways than one. 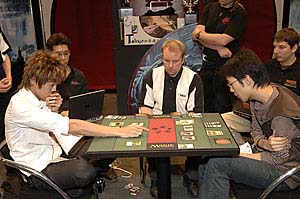 These two countrymen became very familiar with each other over the weekend.

Another factor of note is that Kaji currently has 64 pro player points as of getting this far at Worlds, exactly one point short of the vaunted Level 6 status. With a win here, he will guarantee himself leveling up and getting amazing benefits of hotel rooms and sky-high appearance fees at Pro Tours and Grand Prix. In fact, he has said that he would travel to all the American events next year if he does indeed level up. Perhaps the American pros should be rooting for Mori?

The mirror matchup with this Japanese Glare of Subdual deck is actually very interesting, with threats and answers interacting in intricate ways.

The players kept their hands, with Kaji looking at Seed Spark, Umezawa's Jitte, Congregation at Dawn, Kodama of North Tree, Llanowar Elves and two lands. Mori's Pithing Needle neutralized Kaji's Jitte, but Kaji was content to use Seed Spark to take it out. They then each offered up a Kodama of the North Tree to the legend rule.

Mori's next threat was Glare of Subdual, effectively neutralizing Kaji's Jitte. Loxodon Hierarch was up next, but was one-upped by Yosei, the Morning Star. No matter, Kaji just equipped Jitte onto a Saproling, forcing Mori to tap it, and attacked in for five. He then added a Llanowar Elves and a Pithing Needle of his own on Glare of Subdual. 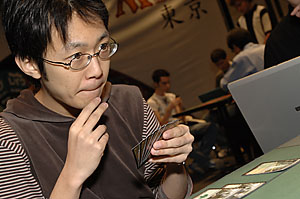 Kaji wondered what to do under a legendary dragon assault.

Yosei attacked and brought Kaji to 16 and was joined by Arashi, the Sky Asunder. These two creatures are quite the combo, giving the owner a chance to tap down his opponent for a couple turns whenever he feels it is necessary. Kaji moved his Jitte to Loxodon Hierarch and attacked into a chump block to gain a couple counters. When Mori played his own Jitte, Kaji responded by killing Llanowar Elves and pumping his Saproling.

Mori summoned a Selesnya Guildmage, then watched as Kaji resolved Congregation at Down for Arashi, Yosei, and Wood Elves. He untapped and drew Arashi, but instead played Jitte and equipped it to a Saproling, attacking with it and a Hierarch. Yosei floated in front of Hierarch and Arashi blocked the Saproling. Mori stacked and resolved damage and then, in a show of rules knowledge, shot and killed his Yosei with his Arashi during the underappreciated end of combat step.

He untapped and slammed down Kodama of the North Tree, which was more than enough to finish off the locked-down Kaji.

Mori sideboarded in an interesting manner, taking out his Glare of Subduals completely:

And Kaji took out some creatures and Pithing Needles, but left his Glares in:

It definitely looks like there's no consensus amongst the Japanese players on how to sideboard this matchup yet.

Mori started the game with a mulligan and then missed an early land drop. He played out a Jitte followed by a sharp intake of breath, not wanting to get Seed Sparked. No luck. He fell to 9 when Kaji chose to activate the white ability on his Guildmage. Mori just untapped and Wrathed.

Kaji followed with Yosei and then, on his next turn, attacked Kaji to 2 and untapped with another Yosei and Kodama of North Tree in hand. He could have gone for the double Time Walk, but opted to just summon the large untargetable Kodama. In any case, it was too much for Mori.

Kaji stared at a hand of Congregation at Dawn, Kodama of North Tree, Seedborn Muse, Seed Spark and three lands. While Kaji thought, Mori got up to use the restroom, and the cameras moved over to the other match. Actually, the choice was difficult enough that Kaji was still thinking when Mori returned. A minute later, he shuffled up for a new hand, no doubt thinking the first one would be too slow.

Kaji's new hand had no lands at all. He looked at for a full 30 seconds, hoping one would magically appear, but none did and he shuffled up again. His five-card hand had a Vitu-Ghazi, the City-Tree, so he kept.

Predictably, he missed his turn-two land drop while Mori accelerated with Wood Elves. He then found a Temple Garden, but Mori had already moved on to Arashi and Yosei. Kaji conceded. 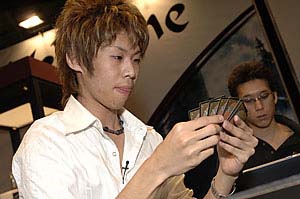 Mori was closing in on a ticket to the finals.

Unfortunately, I couldn't understand any of the banter between games. They kept talking and I picked up a couple tidbits, maybe including the word "Yosei"? In fact, Mori started to get a bit excited and followed that up with a couple anime-worthy screams. He looked at his hand and chanted, "Keep! Keep!"

I was then informed that the players were talking about how awesome Llanowar Elves are and how Mori had one and Kaji didn't. Mori shouted again as he summoned his Elves and Kaji got off to a slower start.

Mori built up more and more creatures, taking advantage of his mana superiority as he knew that Kaji didn't have any Wrath of Gods, so he had nothing to fear. Kaji was soon struggling to stay alive. He started with Glare of Subdual, but only had a Wood Elves in play, and Mori's board was something like this: Yosei, Arashi, two Selesnya Guildmages, Wood Elves, two Llanowar Elves, and seven lands.

Kaji had an end-step Congregation at Dawn and was put to the task of figuring out how to get out of this situation. He was at 8 life and had eight mana in play. His best option was stacking Carven Caryatid and Seedborn Muse on top, then playing both of those, untapping and making a token with Vitu-Ghazi. That would give him four taps, but Mori was going to be able to pump twice with his Guildmages, so he would be killed regardless. Kaji soon figured this out and, saddened, offered the hand without bothering to play out the turn.