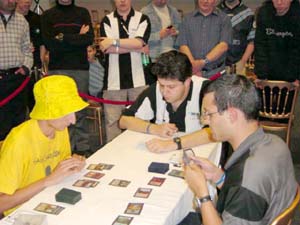 As soon as they sat down, there was hardly any talking going on with both players concentrating on the game ahead of them.

Gab made the first spell - a Galina's Knight - and Helmut on his turn played a Nightscape Familiar. Gabriel had another Knight which he made and started attacking with his monster.

The Familiar sat back to hold off the Knights which both attacked next turn, but Helmut decides not to block and instead used a Repulse on one of the Knights. While Helmut only had one mana open, Gabriel used the opportunity to put a Lightning Angel into play.

Helmut is a very calm and thoughtful player and spent plenty of time during his turns thinking about his plays and being careful about what he did. He missed a land drop which left him stuck on three lands and didn't block Gabriel's next attack as he could only afford to regenerate his Familiar once and Gabriel followed this up by replaying his Knight and also a Meddling Mage. After thinking for a while he finally decided to name Repulse with the Mage and passes the turn back to Helmut.

Now he had his fourth land, Helmut quickly tapped his mana and played a Void choosing two as the number, killing both the two Knights and Meddling Mage in play while also revealing another Lightning Angel in Gab's hand. His own Familiar unfortunately died as well.

After thinking for ages and shuffling his remaining cards in hand Gab eventually decided to put the second Angel into play but unluckily for him Helmut had yet another Void and next turn destroyed both Angels! Helmut didn't look very pleased to see that Gab had drawn into a Goblin Trenches which god played the turn after and started churning out Goblins.

Helmut tried to slow things down by using his Ravenous Rats (getting rid of a Repulse) and using a Repulse of his own on a token. No matter how much he tried to slow down the advancing horde of goblin tokens he couldn't stop them completely and eventually succumbed. 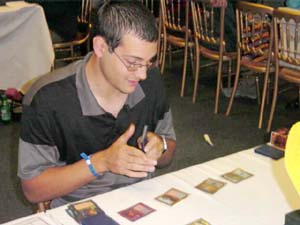 Gabriel got a slow start with no monster to make on turn 2. He did manage to use Ice on one of Helmut's Islands so he could manage to slip Goblin Legionnaire into play without fear of Exclude from Helmut with mana available to sacrifice it.

Helmut tried to Repulse the Goblin but was met by Gainsay. He then used his chance to play Fact or Fiction, revealing Crosis, the Purger, Void and 3 land. Crosis goes into one pile by himself and Helmut took the other four.

Helmut tried to get some defense onto the table and played Dodecapod, which got a smile from both players. Helmut jokingly defended it as being a 3/3 for four mana.

The 'Pod soon became a target of a Prophetic Bolt but as soon as he tapped his mana, Gab starts shaking his head as he had only left a Battlefield Forge as his available mana, signalling Disrupt. Sure enough, Helmut had a Gainsay and if he had left the correct mana then he could have countered it.

When he got to untap, Gabriel Bolted again, killing the Dodecapod while Helmut was tapped out. He continued to attack with his Goblin Legionnaire.

Several more turns passed with neither player casting spells and only the lonely Goblin attacking. Eventually, Helmut tried for another Dodecapod to hold off the Goblin and used a Prophetic Bolt of his own on Gab.

Gabriel tried for Meddling Mage and seemed really surprised when it resolves and he had to start thinking about what card he should name. He finally chose Spite/Malice and gladly lay Goblin Trenches.

After a long hard think, Helmut said "sure" and the Trenches resolved. 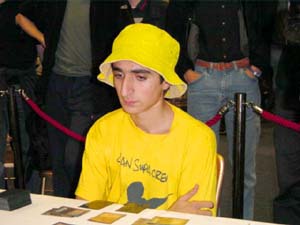 At this point, Gabriel is physically shaking but this probably had more to do with the excessive air conditioning than nerves.

A Void for two from Helmut pulled a Gainsay, Meddling Mage and Galina's Knight.

A Skizzik from Gabriel, played without kicker to leave three mana open, resolved and attacks. Helmut played Malice, Gabriel Disrupted and says, "let's see how good I am," with a wince and a shake of his head. "It's a good card, but a bit situational."

More Goblin Soldiers came out of the trenches, with Malice and Repulse dealing with a couple of them. Gabriel counted the graveyard, thought, then tries a Meddling Mage, but it was Gainsaid. The Dodecapod attacked and was chumped by a token.

A Void from Helmut killed the Mage and a Knight and revealed Skizzik. The Skizzik was played next turn and Helmut thought for a long time before it resolves. He tried to Malice it when it attacked, and Gab cast Disrupt saying "let's see how good I am" as Helmut had plenty of mana open to pay.

Gabriel kept putting pressure on Helmut with goblin tokens and Helmut fought a losing battle trying to slow them down. He still had some chance to win the game as he had 11 mana in play and an Urza's Rage in hand but he never draw the last mana and Gab was on 11 life anyway.

As a last resort, Helmut cast a main phase Fact or Fiction which gave him a Void but this was not enough to stop him from being overwhelmed and he lost to the token army.