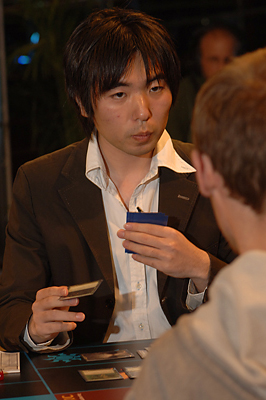 Five-time Top 8 player Shuhei Nakamura.Japan’s Shuhei Nakamura is really hoping the fifth time will be the charm. Not that making that many Pro Tour Top 8s is a tough gig, mind you, but he really wants to hoist that trophy. While waiting for his opponent to show up, he methodically shuffled his deck, showing his usual calm focus. When Germany’s Jan Ruess did arrive, he looked similarly at ease. Neither showed any ill effects from the hard fight to the final four.

Jan Ruess was shuffling up Merfolk, a version he cooked up with Jim Herold, whose odd numbers are the sign of a very thorough playtest process. Nakamura had black-green Elves. They exchanged good lucks and kicked things off.

Ruess led off with Cursecatcher and Sygg, River Guide, a potent threat that can protect his Lords from spot removal and push attackers through Nakamura’s all-green army. Nakamura opened with Llanowar Elves and Imperious Perfect.

Ruess dropped his third land and sent it back. Nakamura hit for 2 with an Elf and waited on his Perfect rather than walk a threat into Sage’s Dousing. Ruess dropped his fourth land and went into the tank. Nakamura put down his hand and watched Ruess’s face intently. Reuss settled on a Silvergill Adept, revealing Lord of Atlantis. He swung in with Sygg, and when Nakamura made a token to block, he tapped out to protect.

Nakamura put out a Civic Wayfinder, fetching a Swamp, and then a Wren’s Run Vanquisher, showing another Wayfinder. Ruess finally dropped the Lord of Atlantis and sent in his Silvergill Adept and Sygg. He spent mana to protect Sygg, taking out the blocking Wayfinder and losing his Adept to the Vanquisher. He played a Cursecatcher after combat and gave it over to Nakamura.

Now it was Shuhei’s turn to think. He put out Garruk, untapping two lands to get his Tarmogoyf on board. Ruess wasn’t about to let the planeswalker stick around, and so forced through two creatures with Sygg’s ability. Nakamura returned fire for 4 and played the Wayfinder, getting another Forest. His army was getting out of hand. 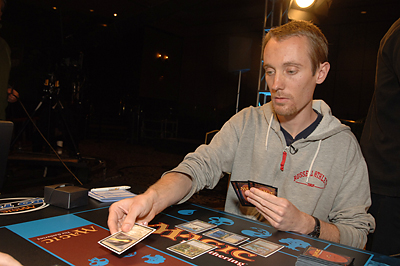 Germany’s Jan Reuss pilots the first Merfolk deck to make a PT Top 8 in... oh, a while.Ruess played his seventh land and glumly ran out a Silvergill Adept for the full five mana. His hand was a lone Island, but his face betrayed no emotion when he was given Cryptic Command off the top. Nakamura thought for a moment and turned all but his Perfect sideways. Ruess made the minimal blocks, protecting with Sygg and falling to 1, but holding dynamite.

He fired back with his whole team and then showed the Cryptic Command on Nakamura’s attack step. However, Nakamura wasn’t out. He played a Mutavault from hand, the one blocker he needed to last another assault.

Ruess untapped and crushed Nakamura’s dreams with a second Lord of Atlantis, taking the game.

Nakamura had the Llanowar Elves, Imperious Perfect opening again, but now Ruess had his sideboard online and Sunlanced the Perfect off the board. He made Tideshaper Mystic and took 2 from Nakamura’s Pendelhavened Elf. The sluggish start was good news.

He played Silvergill Adept and showed a second, who hit play with a Lord of Atlantis after Nakamura sent in his Treetop Village. Ruess tried sending his first Adept, but Nakamura had Nameless Inversion for the Lord and traded an Elf for the shrunken fish.

Nakamura continued his man-land assault, and without the help of a Crusade effect, Ruess’s army was not up to fighting. He played one next turn and dropped Nakamura to 13, himself on 10, but Nakamura had Terror in hand for the Lord of Atlantis and brought more Village pain.

It was time to turn the tide, and Ruess did it in dramatic fasion, tapping his five land for a Reveillark. Now Nakamura couldn’t swing in without bringing back a pair of Lords, supercharging Ruess’s army. He held back and played a Mutavault. The Reveillark sailed overhead, a bad omen if ever there was one, and sure enough Ruess had the Cryptic Command to lock down Nakamura’s Elves and bounce the Reveillark, reanimating his team. Nakamura scooped. 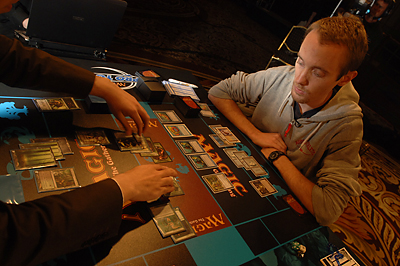 That... is a lot of Elves.Ruess had Sunlance for a second-turn Wren’s Run Vanquisher but nothing to add to the board until a lonely Merrow Reejerey on the third turn. Nakamura had made a pair of Elves and missed his third land drop, but he plucked it when it counted, dropping Shriekmaw.

Ruess tried another Reejerey. This time it was Terror playing executioner, and Imperious Perfect got in on the action. Things were getting out of hand. Reuss played Sower of Temptation and stole the Perfect, but Nakamura’s hand held Profane Command, undoing the damage and bringing the Vanquisher back to the party.

Silvergill Adept showing Sygg, River Guide did little to dissuade Nakamura’s army from coming to visit, and when a second Adept served up no action, they were on to Game 4.

The dominating Sygg made another appearance on the second turn, and Nakamura’s answering Vanquisher found itself on the wrong end of a Sunlance. Ruess started swinging with Sygg and Nakamura brought out a Wayfinder for a Forest.

Another swing from Sygg, and then a Banneret. Nakamura had four lands but nothing to do with them. Ruess continued to build slowly behind the threat of Sygg protection, bringing a Tideshaper Mystic to the board.

Nakamura’s own growth was slow. He brought out Vanquisher, revealing Boreal Druid, and then when Ruess passed on six untapped lands, played it and a Wayfinder. Now Ruess played Silvergill Adept, showing Reejerey, who hit play immediately. Tideshaper Mystic worked his magic, and Reuss islandwalked for 5 with Sygg and Banneret. 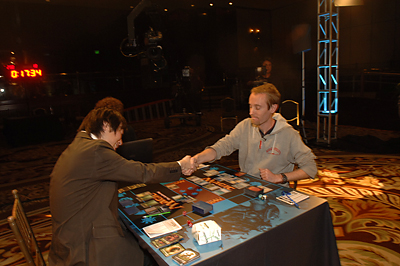 Shuhei Nakamura packs it in, sending Jan Reuss to the Finals.Nakamura’s removal in hand was doing him no good, and now Ruess was working the slow blade against his shield. Nakamura swung with Vanquisher and traded for the Adept, Ruess unwilling to surrender the protection his four open mana offered. Nakamura offered him Garruk Wildspeaker, and Ruess let it in. Nakamura made an Elf and a Beast and passed it back.

The islandwalking Banneret finished off Garruk, and Sygg put Nakamura to 8. Sunlance took care of the Beast.

Nakamura shrugged and turned his men sideways. The Merrow Reejerey got protected and took out a Civic Wayfinder, leaving Ruess at 11. Ruess Tideshapered Mutavault and walked in for another 5. With all that mana keeping his removal at bay, Nakamura was dead in short order.

Jan Ruess defeats Shuhei Nakamura 3–1 and proceeds to the Finals!