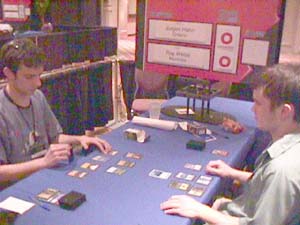 Jürgen Hahn is an old undercarder from the Ontario Magic scene. His personality joins an acerbic wit with a complete lack of self-respect. His Green-Blue-Red Madness deck is similar in design to the one that made such a big splash at US Regionals earlier this year. Ray Weiss of Manitoba has no career to speak of, but his dedication on the PTQ Circuit has helped give him the skills that brought him here today.

Weiss turned up a grip that said "Please wreck me with Fire/Ice." Karplusan Forest could accelerate him into two Birds and two Looters, but the fragility was too much for him. He sent it back. His second wasn't exactly a winner, either. Two Circular Logics and a Flametongue Kavu. He kept.

Hahn broke out Looter and followed up with Mongrel. Weiss had no play. Hahn Looted a Fiery Temper to his face and added a second Mongrel. Finally Weiss hit four mana and dropped Flametongue Kavu on the Looter. The Mongrels charged in and the Kavu took one down. Basking Rootwalla provided a little extra damage, and Looter also wanted in on the fun.

Weiss tried to make a Looter to have some fun of his own, but Hahn had a monopoly on fun. Repulse on his turn cleared the way for five. All Weiss could manage was Bird and Looter. Fire took care of them, and, by extension, Weiss.

Weiss started Game 2 with a fair opening of Llanowar Elves and Call of the Herd. Hahn came back with Aquamoeba and Weiss used the opportunity to make Squirrel Nest. When Hahn attacked on the following turn, Weiss chose not to make a token and block, allowing Hahn to play madness spells without fear. It was a doozy: Violent Eruption, eliminating Weiss's team.

Weiss bounced back with Mongrel and Elf. Hahn had a Hull Breach to take out the Nest, but nothing to press. Weiss got his other Call token and made ready to swing. Hahn's turn was uneventful. Weiss charged. Hahn tried to Repulse the token, but Weiss pitched his hand to make Circular Logic. Hahn played Gainsay. 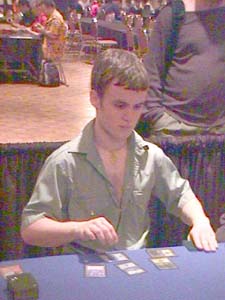 That gave Hahn a huge opening, but he was unable to capitalize. For two turns they stared at each other. Hahn had eight land on the table before he found a Looter. Weiss bashed and pitched lands to take out the Aquamoeba. Hahn's Looter turned up nothing. Weiss attacked again. This time Hahn had to block the Mongrel to survive. He mistakenly put damage on the stack before Looting, costing himself two life from the unblocked squirrels. The Looter turned up Violent Eruption, confirming his error. Weiss saved his Mongrel all the same, and Hahn was at two. He drew and conceded.

Weiss looked at a one land hand, and decided to run with it. He started with Birds, then a pair of Mongrels. Hahn was meanwhile idle, until he hit four mana. He wrecked the Birds with Flametongue Kavu, then forced pitches by throwing it in the way. Next he brought Arrogant Wurm and traded with one.

With a bit of breathing room, he found a Mongrel of his own. Weiss finally hit two land and played his third. Hahn attacked and was let through for two. Weiss tried a counterattack buy got savaged by a surprise Arrogant Wurm. Weiss had to pitch what little was left of his hand to eat it.

Hahn held back, waiting to refuel. Weiss practically fell out of his chair as he saw his next card: Unnatural Selection! He giggled as he showed it to his opponent. Hahn cooly revealed Circular Logic. He untapped, swung, and played another Mongrel. Weiss managed a Call token. Hahn attacked and savaged Weiss's well-planned block with Violent Eruption. The game ended on the following turn. 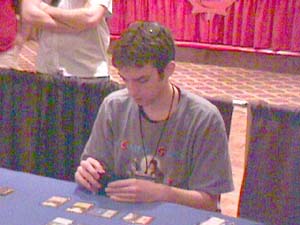 Weiss again chose to keep a one-lander, busting out Llanowar Elves and plucking a forest for Squirrel Nest. Hahn got his Looter on. In doing so he missed a point of damage from his painland. He lamented his sloppy play.

Weiss made a Bird and a token. Fire cleared his mana creatures from the board. Weiss returned the favor on the Looter. But Hahn had Mongrel in reserve, wihle Weiss had only Elf. Hahn swung, and a second Fire took out the precious Elf. Aquamoeba joined his squad.

Weiss drew a redundant Opposition, with time running out. Hahn hit and passed it back. Weiss pulled up the fourth land. He threw down Opposition. Hahn Logiced, and smashed again. Now Weiss tried Flametongue Kavu. Hahn showed him another Logic, and Weiss extended the hand.