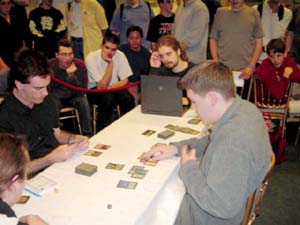 These two had met earlier on today in the swiss, when Matt turned up late for Game 1 and got a game loss. Kai looked a lot more uneasy than he had done for his quarterfinal match, knowing that the match-up was a lot harder.

Kai was playing a Domain deck with Destructive Flows instead of Global Ruins and Deed's for control with Trenches, Migration and Legacy Weapon as kill methods.

Matt was sporting a full on agro red/green deck, figuring that in an insane field with Gainsays in the main decks of many players it was a good meta-game call. In actuality, only 14 of the 184 Gainsays played on day 2 were in main decks, but that hasn't hurt Matt at all as he clinched a top 8 berth.

Kai was relieved to have won the toss, but then had to Paris down to six. He then kept a hand with five land and a Worldly Counsel. Matt made the first play with a Kavu Titan, whilst Kai cast his Counsel for 2.

The Titan then attacked for 2 and was backed up with another, with Budde once again Counseling for two at the end of the turn, a little miffed at having drawn the Legacy Weapon. Once again the Titans came in and were this time backed up by a Thornscape Familiar, but Kai had the Void, which revealed just a Flametongue Kavu.

After 2 more draw phases Matt managed to draw another threat - a Skizzik, which promptly served for 5. Budde dejectedly laid a Legacy weapon and resigned himself to his fate as the Skizzik once again came over followed by an Urza's Rage for the win. Kai revealed his all land hand and just laughed. 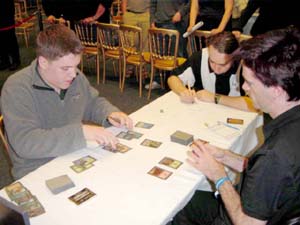 Kai obviously elected to play first in this match-up, but had to mulligan down to six again - keeping a 2 Sphere, 2 Harrow, 2 land hand. This time so did his opponent...twice.

By turn 4 Kai had the full 'Domain' on the table whilst Henstra could only watch with just a Mountain and a Forest to show for his presence in the game. Kai then cast Pernicious Deed, then Allied Strategies for 5, then Lay of the Land... Still nothing from the poor Dutchman, who was now discarding a Ghitu Fire (for some reason) rather than sending a zap across.

"Kill me!" he said smiling grimly, but instead Budde continued the humiliation by casting another Strategies for 5, then Addling naming Green to see: 3 Skizziks, 2 Tranquilities and some burn - he took a Tranquility.

Finally the German managed to find a Penumbra Bobcat but Matt had found his third land and made a Thornscape Familiar. Then a fourth land allowed a Skizzik into play, and Matt cast his remaining Tranquility to kill the Restraint, but the Deed was sacrificed in response to kill the Skizzik and the Familiar leaving Kai with his Bobcat token.

The next Skizzik was then countered and Kai continued to serve for 2 with his Bobcat token, allowing eventually a Kavu Titan to enter the fray, then blowing the Deed for 2.

Finally the German drew a Spiritmonger that was chumped for a few turns then Henstra tried to Scorching Lava it out of the game, but to no avail.

Sideboarding:
Kai simply exchanged one of his Allied Strategies for a Worldly Counsel as he was going second.

Matt boarded in one more Overabundance and one more Thornscape Battlemage with the Necropolis going back in, but took out a Skizzik and 2 Scorching Lavas. 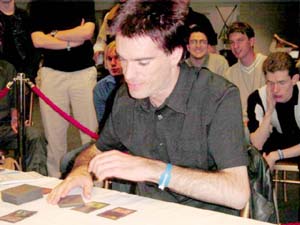 This time things looked promising for the Dutchman as he managed to make a turn 2 and turn three play (Familiar and Mongoose), but they were facing down a Penumbra Bobcat. Unfortunately his land dried up on three and he had to start making Skizziks without kicker (2 of them), successfully reducing the Juggernaut to 8 life, but by turn 5 Kai had laid a Spiritmonger and a Pernicious Deed with Evasive Action backup.

With a second Disk in hand Kai was looking strong to finish the game off in seconds, but then he drew a second Spiritmonger and it was over in moments.