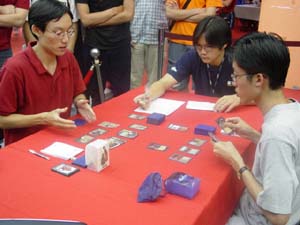 Albertus Law has been taking names with his team's updated take on Black-Blue-Red Psychatog. Burning Wish not only allows Versatility, but also access to the game-ending Obliterate. The way he's been sawing through the competition, he's confident he can take the day. However, his opponent in the semifinals is Kang Nien Chiang, a strong Taiwanese player.
Worse, Chiang is running new-school Squirrel-Opposition. Not a good matchup for Law.

Law kept his opening hand, and Chiang sent his back. His next six were acceptable. Law didn't even smile. He knew he was in for an uphill battle.

Chiang's mulligan was good to him, and he started out with Llanowar Elf and then Squirrel Nest. Law had Nightscape Familiar and Psychatog, but little else. He bought time with Memory Lapse, and successive attacks kept the Squirrel population low, as Chiang blocked the Familiar to tie up Law's mana.

Cunning Wish fetched Chiang a Rushing River from his sideboard, and that seemed to be his cue to go on the offensive. He let the Familiar hit, building his army of squirrels. As we all know, it's all about how cool your tokens are, and Chiang was sporting some high-quality custom-made anime-styled ones. The River kept Law busy for a turn, and soon he was staring at lethal damage next turn.

He played Fact or Fiction with six mana up. Chiang was ready with Counterspell. 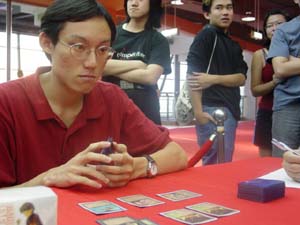 Law looked at his hand for Game 2. It was six land and Fact or Fiction. He couldn't let that ride, so he sent it back. He was rewarded for his decision. He had only two land, but Familiar, Fact or Fiction, Engineered Plauge and Fire/Ice.

Chiang answered his Familiar with Llanowar Elf and Compost. Next came Call of the Herd while Law failed to find land number three. He Iced and found nothing. The second time he got a Salt Marsh, but Chiang showed him a very fine Phantom Centaur. Things looked grim.

Chiang turned it all the way up to "Funhouse" with a Flametongue Kavu that took out the Familiar and drew him a card off Compost. He passed it back to Law, who just shook his head and packed up his cards.