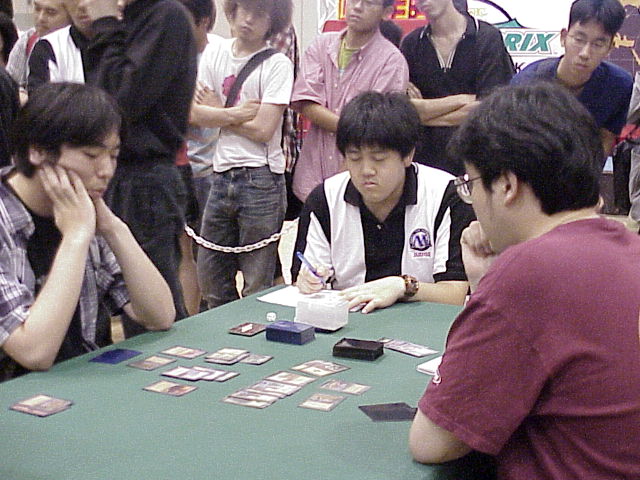 After punishing tempo decks in their respective quarterfinals the two red-green decks had to square off against each other. Kenshiro Ito of Chiba against Shuhei Nakamura of Osaka. Both respected players at the local level who have yet to make their mark on the world stage.

As expected, it was a slobberknocker. The early turns featured a flurry of Mongeese from Nakamura that traded hits with an unkicked Kavu Titan and Raging Kavu. A little burn fell on each side, and when the dust settled, the two were at ten apiece. Ikeda had Blurred Mongoose, and Nakamura had Thornscape Familiar and Keldon Necropolis.

Both brought out a second Mongoose, but Nakamura went to the head with Scorching Lava, signaling destruction for Ikeda. The following turn he ran his creatures into combat. Ikeda's Urza's Rage took out the Familiar, and his Mongoose blocked. After damage was stacked, Nakamura threw his Mongoose at Ikeda. 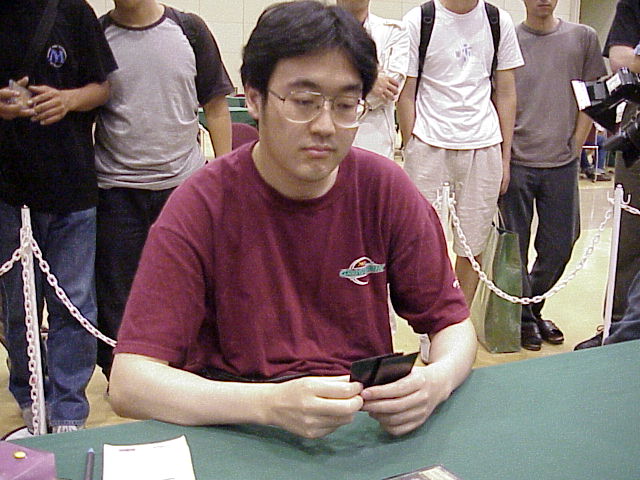 Ikeda thought he had the advantage, adding a kicked Thornscape Battlemage to his side, staring at Nakamura's lack of troops. However, Nakamura's last card was Ghitu Fire, taking the first game.

Ikeda had to mulligan for game two, but bounced right back. He traded Mongoose hits with Nakamura, and had Fire on hand for his Raging Kavu. Nakamura, in turn, took down Ikeda's Thornscape Familiar with Scorching Lava.

Soon, however, Nakamura had three bears to his opponent's one, and was in fabulous shape. Ikeda pulled a forest from the top of his library, and slammed down Shivan Wurm. Not to be outdone, Nakamura played a Wurm of his own. 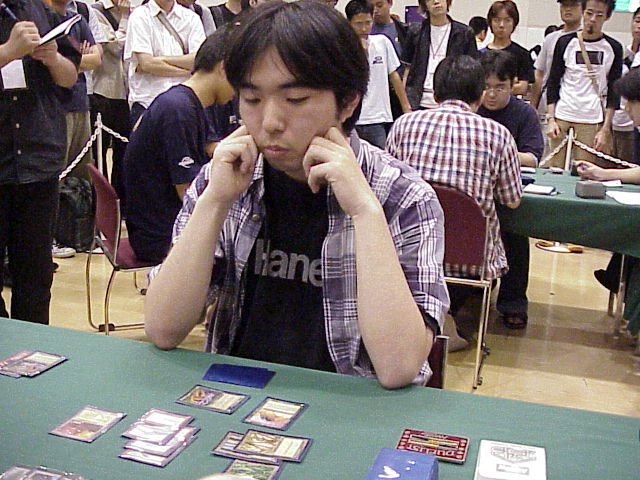 The two Wurms traded on Ikeda's attack. He replayed the gated Mongoose and turned it over to Nakamura. Nakamura dropped a second Wurm. Ikeda laughed as he untapped and showed his second Wurm. They traded again. However, Ikeda was getting antsy. He had only two bears to Nakamura's four.

Nakamura smiled, and gave him a real reason to worry: Shivan Wurm number three. Ikeda tried to stop it, sacrificing both his Mongeese and a Prophetic Bolt to take down the Wurm, then adding a kicked Thornscape Battlemage to the mix. However, the damage had been done. Nakamura needed just one more weapon to take the game. His deck gave him Skizzik. He was on his way to the finals.