Semifinal: Looking for an Epic Finish

Asahara is still looking flash, now complete with a suit jacket to compliment his Jon Finkel-style shirt and tie - plus the added local flavor of a small, bright green juice box featuring a yellow bird and a red sun. 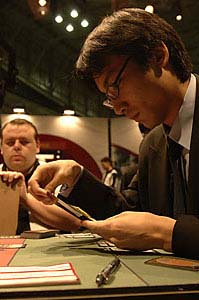 Asahara's fashion sense and playing ability was on display.

Asahara could only grin back and nod as they shuffled up to see which one them would be playing in the finals later on this afternoon. Karsten won the roll, and after a moment's thought, chose to draw. Asahara looked taken aback and asked "I play first..?"

Asahara lead with a Sacred Foundry, but Karsten decided that he would rather move straight to his end phase than play a land. "Man! No lands. Discard?" he bluffed, dropping a Yosei, the Morning Star in the Bin.

Both players then spent the next few turns playing out lands until Karsten played Gifts Ungiven for Reclaim, Recollect, Kodama's Reach and Goryo's Vengeance. When the Reach and the Recollect went to the graveyard, Karsten untapped and dropped his bomb card, Greater Good.

He then cast the Goryo's Vengeance on the Yosei that had been there from turn one, and attacked Asahara down to 15. Greater Good then ate the Yosei, tapping Asahara down and drawing Karsten five cards closer to his combo again (and again and again.) Without any untap steps coming in the near future, Asahara scooped up his cards to move on to Game 2. 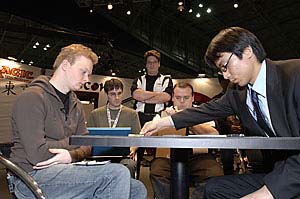 Karsten and Ashara, with a seat in the Finals on the line.

In what could be considered a mild declaration of war, Asahara's suit jacket came off. However, it was the players' decks that were the most hostile, as both players found themselves mulliganing to five.

Despite Karsten letting Asahara have the play in Game 1, he elected to play first again for Game 2. The first non-mana spell of the game came in the form of Asahara's Ivory Mask. Karsten responded with a Gifts Ungiven that put Cranial Extraction and Kodama's Reach in his hand, and Rending Vines and Hana Kami in the grave. 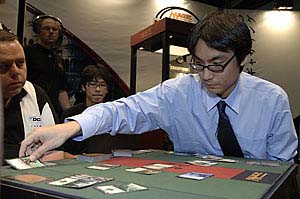 The jacket's off, and Asahara's getting serious.

A few turns later, Karsten spliced Soulless Revival on to his Kodama's Reach, starting the Hana Kami-Soulless Revival splice cycle of abuse with his Rending Vines targeting Asahara's freshly played Genju of the Realm. The scoop from Asahara came not long after.

While shuffling for Game 3, Karsten asked the judge the score in other match. As they continued shuffling, the score changed from one apiece to 2-1 in favor of Katsuhiro Mori, and the cameras moved back to catch the action on the back table.

"I guess they found your games boring," the judge quipped.

Asahara again chose to play, and Karsten again chose to mulligan, and then found promptly himself staring down the barrel of an Enduring Ideal. Karsten threw out the Gifts for the Hana Kami engine in response, in case Asahara pulled out the Ivory Mask. When the Ideal resolved, a Confiscate took away Karsten's Brushland, leaving him with a single Forest for green mana.

Karsten retaliated with a Yosei, but must not have thought it would stay on his side of the table for long. Asahara Idealed out a Zur's Weirding to stop Karsten from drawing any further answers, and then another Confiscate for the Big White Dragon, forcing Karsten to pack it up.

Karsten again stumbled over his opening hand, and was forced to cash it in for six cards. Asahara pulled a third-turn Ivory mask, then a fifth-turn Enduring Ideal, causing Karsten in turn to pull a face. Karsten chuckled as he shuffled his cards together for the final game.

After receiving such a swift and merciless beating in Game 4, Karsten made a show of changing his sideboard plan, but in reality, all he did was shuffle his Wraths back in, and then took them back out again.

As before, both players built up their mana bases with Fellwar Stones and Sakura-Tribe Elders, looking for that big turn to crush the other before they in turn were crushed themselves. Karsten led with a Gifts Ungiven, again for the Hana Kami engine, only to have Asahara throw down a big Enduring Ideal. With Karsten having only six land in play and a Sakura-Tribe Elder, there was some speculation amongst us reporter-types as to whether or not Asahara should have started Confiscating Karsten's green mana sources instead of slapping out the big crowd pleaser, Form of the Dragon. 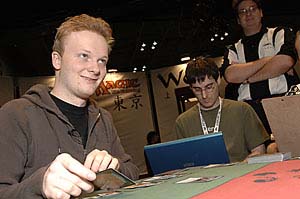 Karsten didn't want to see a 2-0 advantage go down the drain.

But Form of the Dragon it was, which left Karsten able to play the Greater Good languishing on top of his library (courtesy of his Sensei's Divining Top), sacrifice the Elder to draw one and discard his Yosei and two other cards while still having the Goryo's Vengeance in hand for the win.

However, Karsten went instead played Gifts for only two cards, Yosei, the Morning Star and Kokusho, the Evening Star, and passed the turn back. Asahara decided it was prudent then to Ideal out his Zur's Weirding to stop Karsten from drawing into a Goryo's Vengeance. When the Weirding ended up in play and both players' hands were revealed, Karsten showed that he already had the Vengeance and the match in the bag.

Frank Karsten defeats Akira Asahara and moves on to face Katsuhiro Mori in the 2005 Magic: The Gathering World Championships.