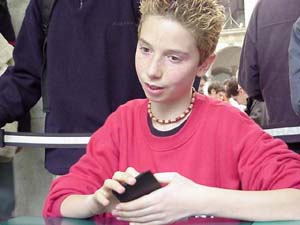 Marcio Carvalho Sligh against Oath. The matchup that we have known in a thousand different configurations for as long as Oath has been an Extended card. On one side the undisputed best player in the game. On the other a small kid with great confidence and a knack for trash talking.

Marcio: "If you have the Fire/Ice you are a lucky guy."

He didn't but he Brainstormed and used a Flood Plains to drop a Powder Keg. He blew up the Fanatics and countered the Cursed Scroll. That opened up the way for an attempt at an eight point Price of Progress.

That forced Kai to remove his Morphling from the game to Force of Will it. Still the damage came in: Firebolt. A Ball Lightning got Sworded out of the way. Through it all Kai launched Brainstorms to jockey for position.

When he felt confident enough to attack with the Village Marcio Incinerated it and tried to drop three Jackal Pups. Kai counter two of them and still had the counter for the next Ball Lightning and a Fireblast.

An Oath entered play and Marcio got a second Seal of Fire. That along with the Barbarian Ring brought Kai within reach of the flashbacked Firebolt. Two draws later it was all over, to the crowd's noisily delight.

An error on Marcio's sideboard had him present a deck with one less card. Initially that was a game loss but the Head Judge was called and they fixed it in time. So the second game got of to a shaky start but was quickly underway.

Kai kept a tough hand and opened with Wasteland. On the second turn he had to let a Scald resolve. With a Tropical island and two Wastelands the best he could do was play a turn three Call of the Herd.

A Fanatic and a Firebolt took out the token and a second Fanatic came into play. Again Kai took one damage to play another Call and again Marcio killed it with a Rage. Despite Carvalho's antics and his mana problems - worsened with a Wasteland - Kai kept smiling.

An Hydroblast took out the Scald and after a mix up with the life points Kai used a Brainstorm and a Impulse to find a solution for the Cursed Scroll. He seemed to find a lot of land but the Fanatic and the active Scroll where bringing him down slowly.

The Fanatic took one hit to block a Call token and Kai found a Powder Keg.

When the little Portuguese tried to kill the token Budde Sworded it for some extra life. The second Call got flashbacked and despite Marcio's pleads the deck did not provide a Price of Progress.

A Fact or Fiction gave Kai two Impulses over lands and a Swords to Plowshares as he fell down to seven with a Ring on the table. A second Scald showed but Kai Pyroblasted it.

At least Carvalho's Wastelands were keeping the green mana of the table. But the elephant token was taking its toll. With two Price of Progress in his hand Marcio blew up two Rings to kill the token.

A Scald and another Furnace resolved and all of the sudden the Portuguese was giving Kai Budde a lot trouble, once again. Budde played out a Morphling and there was little Marcio Carvalho could do apart from scooping.

A Fanatic showed up and two Wastelands took a bite out of Budde's start. The Mogg got destroyed by a Swords while Marcio dropped Cursed Scroll and Seal of Fire.

The dice rolled to decide which card to pick on Scroll activations were not helping Kai at all. His Fact or Fiction got him Counterspell, Volcanic Island and Powder Keg. 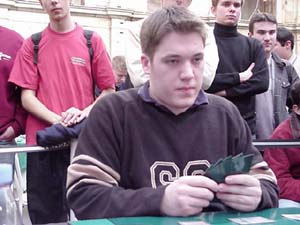 Kai Budde Kai had to spend two counters to stop a Scald from resolving but he had a surprise next turn: Spike Feeder. When he stopped the next Scroll it looked like it might have finally found an opening to survive.

The three Rings and the Seal meant Marcio needed one more point of damage, along with the Fireblast in his hand, to win the game.

Sensing his trouble Kai started sending in his Treetop Village as well while Marcio drew land after land while throwing Rings at Kai. The little Portuguese finally found a Wasteland to slow his bleeding and Kai went back to attacking only with the Feeder.

The Seal ate the Feeder but Kai had a Call of the Herd and the Force of Will to protect it for the last swing. Marcio extended his hand, for once calm and collected. His joyride had come to an end.

It seemed almost impossible but this is the kind of thing Kai built his reputation on: doing the impossible.

Kai now had to wait a long time for the Mello - Ruel semifinals.