Albertus Law is riding on what might be the best twelve months in his Magic career. We've already mentioned lots about him in his previous feature matches, and by now, one should be well versed with his various accomplishments. Ding Yuan Leong is one of Singapore's more consistent players, making this year's national team.

Leong won the die roll and decided to keep his hand after some debate, which is understandable if your hand holds Lashknife Barrier, Absorb and five lands. Law immediately went back to his library for seconds. When he came out, his hand held four land, Repulse and Urza's Rage. 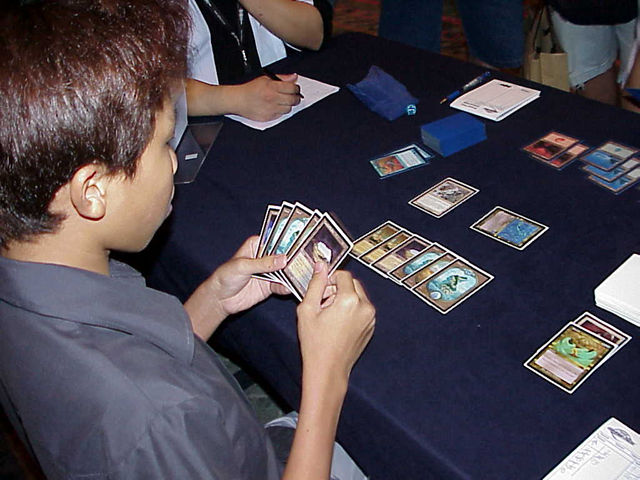 Due to the conditions of both players' hands, one would not expect much action for the first four turns of the game. However, Leong was able to use a freshly drawn Galina's Knight and employ it before Law reached three mana. The Galina's Knight went through unopposed. Then, Leong went for a Voice of All, but Law had drawn an Evasive Action. When Law played his fourth land, it became obvious that his problem was no white mana. Fortunately, he was not alone. Leong still had not drawn any cards of significance, and other than land, held just the aforementioned Lashknife Barrier and Absorb in his hand, the latter of which was spent to counter Law's end step Repulse.

Eventually, Law drew a source of white mana- a Battlefield Forge. By then, Leong's Galina's Knight was able to knock him down to twelve. Still, although he had finally gotten all three colors of mana, he had nothing to show for it, except for the word, "Go."

Law tried to rid himself of the Galina's Knight again with a second Repulse. When Leong responded with a Fact or Fiction, Law split them into Spectral Lynx-Coastal Tower against two Lashknife Barriers and an Exclude. Leong chose the larger pile, and then decided to let the Repulse resolve. Of course, that now meant that Leong's hand had exceeded the seven-card limit, so he discarded a Caves of Koilos.

With all three Lashknife Barriers in play, Law's Urza's Rages were now useless as a source of creature removal. Instead, he looked at the eight lands in play and the two Urza's Rage in hand. He then began to formulate a plan. 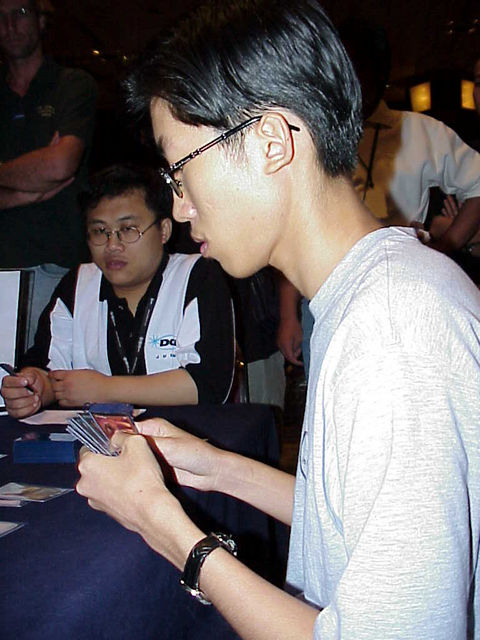 Beginning with an end step Prophetic Bolt, which Leong allowed, Law fished for the lands needed to reach that all-powerful twelve-mana barrier. Given that his draws would go correctly, Leong now had just three turns to live. Another Fact or Fiction was split, giving Leong the option between Absorb-Plains or Galina's Knight and two Repulse. Obviously sensing the Urza's Rage plan and valuing his life, Leong chose to take the Absorb pile.

Finally, Leong decided to release the Galina's Knight that had been Repulsed back turns ago. This time, Law had no intention of letting it resolve, and Excluded it, to which a counterwar consisting of four Absorbs, two each, erupted, leaving Law as the victor. Now, it was Law's turn to cast his own Fact or Fiction. Leong split them into the following piles: Fire/Ice-Exclude or Shivan Reef-Exclude-Obliterate. Law chose the larger pile, not because of its Obliterate, but because of that crucial land that would bring him one land closer to twelve mana. Of course, the Obliterate would also serve as a nice emergency button, should things get out of hand. Now, Law had eleven land in play, and two Urza's Rages in hand, just waiting to unleash what might happen if you got on Urza's bad side.

The Exclude that Leong gave him earlier was put to good effect when Leong tried to play a Voice of All. But to deny Law the chance to draw a card, Leong Excluded his own Voice of All. At the end of Leong's turn, a Prophetic Bolt from Law reduced him down to 15, and gave Law a Fact or Fiction. Since Leong had so readily allowed the Prophetic Bolt to resolve, Law cast the Fact or Fiction on his own turn, which Leong had to allow. This time, the piles were split into two Goblin Trenches by themselves against a Shivan Reef, a Fire/Ice and another Fact or Fiction. Could Law have forgotten that he needed just one land to deal 20 damage?

When Law played a twelfth land, all was complete. Now, all he had to do was remember that Urza's Rage does have a kicker cost. Fortunately (much to this reporter's relief), he did. 24 mana and 20 damage later, Leong was vacationing in oblivion.

Just before the second game, Leong decided that his Excludes and Repulses just wasn't worth it, and took them all out, as well as his Stormscape Apprentices and Lashknife Barriers. In their place, he brought in Crimson Acolytes, Gainsays, Unnatural Selection, Pure Reflection and one copy of Aura Blast. Law took out all of his Goblin Trenches and Evasive Actions. He also removed his lone Obliterate and took out one Mountain and one Urza's Rage. He brought in four Gainsays, four Meddling Mages and his one Rakavolver.

Leong decided to keep his opening hand, which was slightly better than the first game, with a two-drop in the form of a Spectral Lynx. Law showed that even that wouldn't intimidate him, Firing the Lynx away on his own turn, and dealing a point of damage to Leong in the meantime. Leong tried again with a Meddling Mage, and named "Urza's Rage", which was perfectly fine with Law, since he hadn't drawn his...yet.

Unfortunately, he still did not have a way to rid himself of the Meddling Mage, although he certainly held lots of ways to deal with Leong's other threats, with Exclude, Absorb and Gainsay in his hand. However, Leong refused to move, mostly because he couldn't. If Law's hand sounded fine, look at Leong's: Gainsay, Gainsay, Absorb and Dromar's Charm. 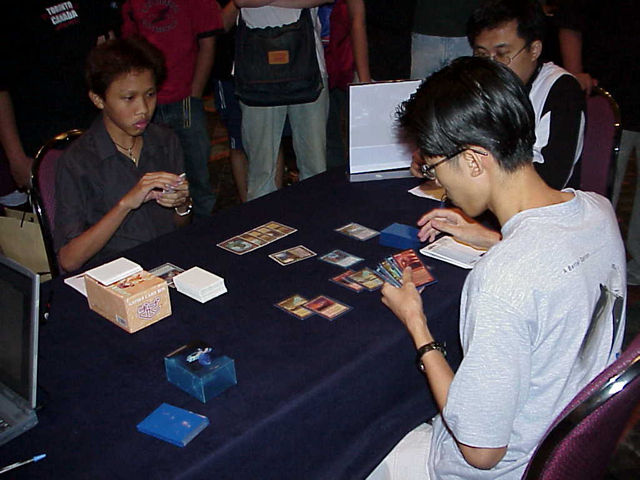 Eventually, Leong reached another one of his sideboarded cards: Pure Reflection. With Law at five mana, Leong decided that it was worth the risk, and went for the Pure Reflection with Gainsay backup. But, as we all know, Law holds both Absorb and Gainsay, so Leong held back some more. Besides, he really wasn't in a rush since it was he who had the threat on the table - that is until Law just about had enough of the Meddling Mage and Repulsed it back. His Repulse met with Leong's Gainsay, which Law defended with a Gainsay of his own. Showing little affection for his counterspells, Leong called upon Dromar's Charm to protect his Meddling Mage once again.

With Law's counterspells exhausted, Leong went for the kill- Pure Reflection. Law tried to Absorb it, but Leong Absorbed back. Unfortunately, Law still had a Gainsay in his hand, and the Pure Reflection never resolved. That is all a minor matter, for the Meddling Mage which had been summoned way back on turn three had actually managed to reduce Law's life total down to 9 (it would've been 6, but remember the Absorbs). When Leong went for a Voice of All, Law decided that he really couldn't handle two 2/2 creatures on the board at once, and Excluded it. The Exclude got Law his Fire/Ice, and he finally rid himself of the Meddling Mage, and freed up the Urza's Rage that had been locked down.

Then came technology with a capital "T"- Rakavolver with both kickers. Suddenly, Leong came to the realization that all his Repulses and Excludes are sitting away in his sideboard. What's one supposed to do? Leong's only hope is to try and force a Voice of All into play, a rather daunting task considering that it has to be done fast, and before Law reached twelve mana again. Unfortunately, the angels never showed up in time and four turns later, Law found himself advancing to the finals.