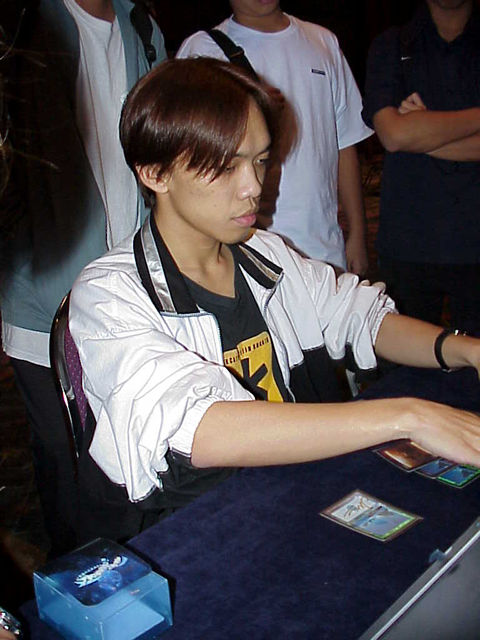 Onoda had to take a mulligan in the first game. His hand was seven lands! However, Onoda has consummate poise, and didn't flinch as he started pile shuffling a second time. His six-card hand was acceptable.

A turn two Meddling Mage stranded two Shivan Zombies in Onoda's hand. He made up for it with a Phyrexian Rager that earned a Repulse from Hoon. Hoon played coy, holding back on four mana. This let Onoda Terminate the Mage and bring out a Zombie. 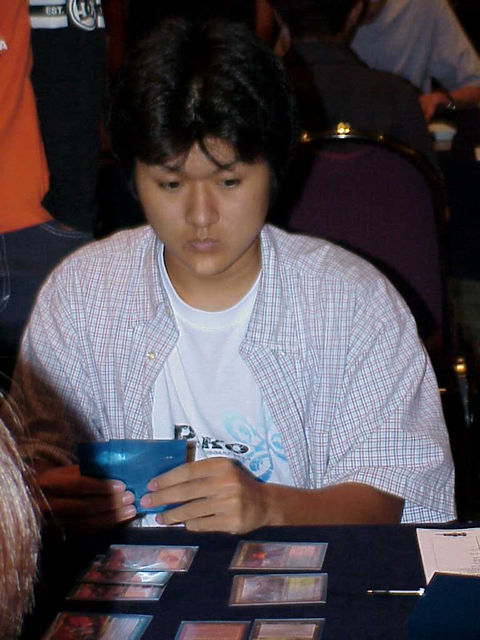 Hoon's reticence let him play Fact or Fiction, turning over Lightning Angel, Disrupt, Galina's Knight and two islands. Onoda wasted no time putting the Angel by itself. Hoon took the other pile. He untapped and made a Galina's Knight and a second Mage, this one stopping the Phyrexian Rager he knew was in Onoda's hand.

Onoda untapped and kicked up a Skizzik. Hoon soaked two with his Knight, but fell to thirteen. Things were not going his way. He finally found red mana, and chose to send with both his creatures and then fry the Skizzik with Prophetic Bolt on Onoda's turn. Onoda made a second Zombie and an unkicked Thunderscape Battlemage, but the tables had turned on him.

Hoon attacked with his Galina's Knight alone, and made a Goblin Legionnaire. He put one of the Zombies on Ice for a turn, but had no counter for Onoda's second Battlemage, kicked this time. He lost Disrupt and Goblin Trenches. 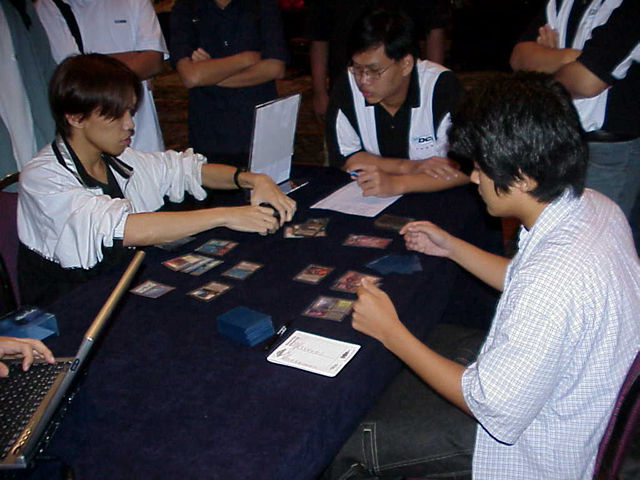 Hoon was tired of all this waiting around. He leaned back in his chair and flicked his cards around. He eventually sent all his guys into the Red Zone, sacrificing the Legionnaires to deal two extra to Onoda. With Onoda thus reduced to four life, Hoon tapped five and put a Prophetic Bolt on the table. Onoda packed up his cards.

Both players kept their opening hands for game two, and Onoda was on the case quickly with Shivan Zombie. Hoon matched him with Goblin Legionnaire. He let a Phyrexian Rager come into play unopposed, and passed his fourth turn without action. He sacrificed his Legionnaire to take down the Rager.

Onoda kept the pressure up with a second Rager, but this Hoon could not allow. He Absorbed. When Onoda came back with a kicked Skizzik, Hoon was ready with Prophetic Bolt. All the time, Onoda's Zombie kept at him.

Hoon soon had enough. He Repulsed the Zombie, then Absorbed it when Onoda tried to bring it back. This gave Onoda the chance to bring down a third Rager unopposed. However, Hoon was not idle. He tapped out to make a Dodecapod and a Meddling Mage to stop Skizzik. 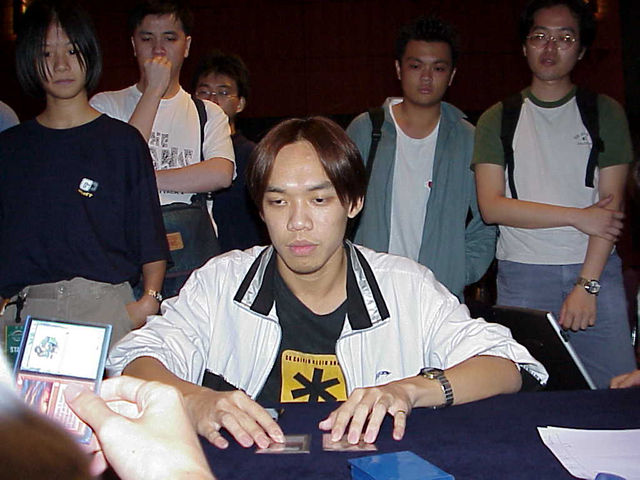 However, Onoda's hand was all gas. Flametongue ate the Dodecapod, and the Mage was Terminated. Hoon had a Goblin Legionnaire in reserve, but was running short on cards. Pyre Zombie forced the Legionnaire to blow up the Flametongue, and the Rager hit again.

Onoda regrew the Zombie and Addled. Hoon was forced to Prophetic Bolt in response, knocking Onoda to ten. Onoda chose red and missed, seeing two Dodecapods and a Lashknife Barrier. Good thing he'd held back on his Thunderscape Battlemage!

Hoon untapped and played the Barrier, drawing into a Lightning Angel that came down swinging. None of it mattered. Onoda topdecked a mountain, and took the game with Ghitu Fire. 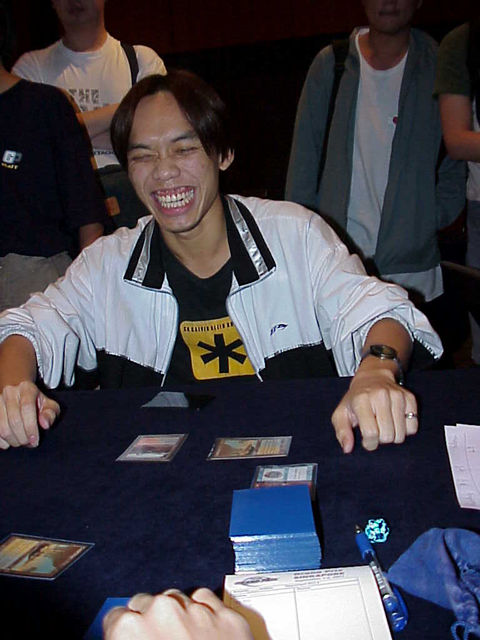 Hoon had the lead-off position for game three, and made good use of it. His second-turn Meddling Mage prevented Onoda from bringing out his Shivan Zombie. He had to settle for a Nightscape Familiar, which was Repulsed on Hoon's next turn.

Onoda Addled for red, taking Urza's Rage and seeing Meddling Mage, Repulse, Galina's Knight and plains. Hoon brought out the Mage, taking care of Nightscape Familiar, as well as the Knight, threatening to swarm for the win. Onoda's Phyrexian Rager was repulsed, and he fell to nine.

Onoda was in a tricky spot. He had only four land, and plenty of Familiars and Zombies he couldn't cast. He made a Pyre Zombie, and took down the Familiar-stopping Mage. He dropped to five. He made a Phyrexian Rager and a Nightscape Familiar in a bid to stay alive. Hoon showed him Prophetic Bolt, and he scooped.