Semifinal: Pedal to the Metal

I'll be honest with you: These are two of my favorite Magic players. Andre Müller has been around forever, always going up and down on the gravy-filled rollercoaster that the Pro Tour can be. Every time he fell off the train, he immediately re-qualified via a PTQ. Andre also is very good company, and when he's in story mode, be sure to listen and maybe even learn a thing or two. Plus, he could read by the time he was four years old, and has finally replaced his trademark cracked glasses.

Shuhei Nakamura is one of Magic's greatest. He is not only very polite, kind and helpful to everyone, and pretty good at Magic, he also enjoys it like few others. Shuhei is always ready for a game of Magic. He smells the scent of a freshly opened booster pack across half the tournament hall. He travels to all the Grand Prix around the world. For him, Magic still is the exciting game it was for each and every one of us when we discovered it. Plus, when you watch him play, you can almost always learn a little something. Or a lot. 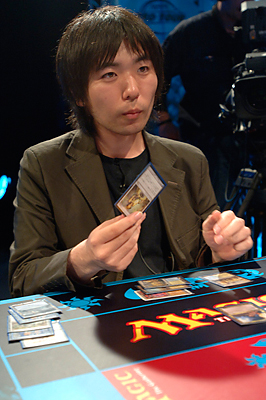 Shuhei Nakamura makes his play for the Finals. Shuhei kicked off with Meddling Mage on turn two, naming Enduring Ideal. The Japanese player really had studied Andre's decklist to find that hidden gem of a card in there! Andre was content with suspending Lotus Bloom and loading up Pentad Prism. Shuhei browsed with Thirst for Knowledge, discarding Sundering Titan and making Vintage players everywhere think of Goblin Welder.

Another Lotus Bloom from Andre, another Thirst for Knowledge from Shuhei, discarding Chrome Mox. The Japanese Player was getting ahead on cards and damage, as the Meddling Mage took Andre to 14. Shuhei transmuted Tolaria West for Chalice of the Void and played it for zero, countering Andre's first Lotus Bloom when it wanted to come into play. Andre had alternatives, though. Form of the Dragon was his choice, played off the Pentad Prism.

Andre wasn't bothering with the Meddling Mage. He shot the dragon's fire straight at Shuhei, forcing the Japanese to find a solution or die in four turns. Thirst for Knowledge gave the Japanese a deeper look into his library, but his only outs to a firebreathing Andre Müller before sideboarding were two Exalted Angel in play, or two 4/4 Angels from a Decree of Justice. Shuhei transmuted Tolaria West to thin his library and got another Chalice of the Void, playing it for two mana, maximizing his chance to draw into a solution.

But Andre wasn't willing to take any chances. Solitary Confinement made it impossible for Shuhei to win, because his Engineered Explosives would only go up to two, and Shuhei had no other way to remove enchantments before sideboarding. Shuhei conceded.

The players grabbed their sideboards and adjusted their decks.

Andre added 1 Pyroclasm and 2 Boseiju, Who Shelters All to his deck, exchanging them for 1 Lotus Bloom, 1 Solitary Confiment and 1 Mikokoro, Center of the Sea.

Shuhei chose to play and kept his hand after much deliberation, but Andre immediately shipped his hand. Andre was focused, concentrated, and terse. As his nickname is "TrashT" because he talks so much, one might wonder why he kept his mouth shut in this match. But for Andre, talking is a tactic. He knows that against a player as good as Shuhei, trash talking is just not going to accomplish anything, so he simply shuts up.

Card selection and drawing was the theme of the game. Andre had laid a first-turn Sensei's Divinig Top, and Shuhei refilled with Thirst for Knowledge, discarding two Decree of Justice. He had little use for them this early in the game. A turn later, EOTFOFYL? It seems that old acronym (meaning "end of turn Fact or Fiction, you lose") is not true anymore, but the powerful draw spell still gave Shuhei a good deal. Andre split the selection of Flooded Strand, Urza's Mine, Disenchant, Meddling Mage, and Azorius Signet between Mine and Mage versus Signet, Strand and Disenchant. Nakamura trashed the Mine and the Mage (good name for a movie, by the way) and bolstered his mana base on his turn.

Andre had fetch lands going with his Top, slowly sculpting a hand to play with. Shuhei wasn't one to mimic this subtlety with his card drawing: Another Thirst for Knowledge made him discard Engineered Explosives. The cards in his hand must have been quite good, as Shuhei removed an Exalted Angel with Chrome Mox that he could have otherwise played. Meddling Mage banned Enduring Ideal, and Disenchant removed Pentad Prism.

Andre sang a little Seething Song. I caught a glimpse of Dovescape in his hand, but that was not what the German was shooting for. It was Honden of Seeing Winds, willing to compete with the fourth Thirst for Knowledge Shuhei had used to shape his hand. When Shuhei had an immediate Disenchant for it, disappointment showed on Andre's face. A second Fact or Fiction hit the red zone that the players used far more as a stack than for combat. Shuhei was drawing insane amounts of cards. This one was all mana, and it had the complete Urzatron in it, together with Tolaria West and Hallowed Fountain. After Andre split, Shuhei took Tolaria, Fountain and Power Plant.

Fact or Fiction #3 finally gave Shuhei a win condition, Exalted Angel, that Müller put up against Chalice of the Void, Azorius Signet and a land, together with Tolaria West. But Shuhei didn't want that Angel either, instead revealing Mindslaver in his hand. When the Gleemax lookalike resolved, Andre Müller knew he was done in.

Andre readjusted his deck slightly, taking out a Seething Song and putting in the third Boseiju, Who Shelters All. While Shuhei had just three Condescends as actual counterspells, Boseiju enables Andre to operate freely under Chalice of the Void. "If you draw so many cards, your deck is very good," Andre said.

Andre went all-in on a turn-four Form of the Dragon. Shuhei retorted with Disenchant and made a face-down Exalted Angel. Müller had spent his sacrificial lands and Seething Song to power out the enchantment, and the Disenchant had left him with just a Plains—not enough to come back from such a devastating loss of resources. It was a risky play, and not rewarded kindly.

Andre quickly announced he'd keep his hand, but Shuhei took a trip to mulligan-land. Enduring Ideal, resolved on turn two, made Andre happy and destroyed the Shu. All the enchantments began to come out, and Form of the Dragon ended the bout. Yo. 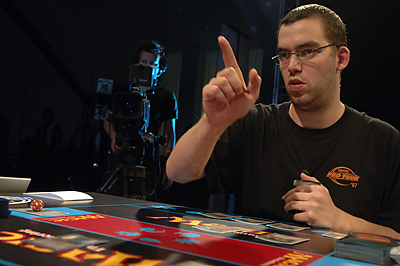 Andre Müller points toward victory. This was it! The deciding game in a Semifinal that had so far taken up merely 55 minutes, while on the other table, Fortier and Barra were still in Game 3. The two players had delivered games worthy of a PT Top 8 so far, and the decider was nothing short of exciting.

Andre's Top on turn one looked mighty fine, but Shuhei was back in the card drawing game with Thirst for Knowledge, discarding two lands. On turn four, the Japanese presented a face-down Exalted Angel. Andre was not happy with that, intently staring at the not-so-anonymous morph. Between his hand and his Top, he was trying to figure out what combination of cards might get him out of the grip of the Angel. He played a second Top and suspended Lotus Bloom, waiting to set up himself for Enduring Ideal.

Attacking took Andre to 11, then to 7. Shuhei was clearly agitated, expecting to win this. When Shuhei announced going to 27 life, Andre stopped him: "No, 23!" Everybody else around the feature match table—the judge spotter, the coverage spotter, the table judge, and this reporter—immediately corrected him. Andre had forgotten to note down one of the attacks (both his loss and Shuhei's gain), giving him much less life than he actually wished for.

The German sprang into action, Shuhei leaning forward on his seat to see what he had up his sleeve. Andre accelerated into Enduring Ideal with Seething Song, getting Form of the Dragon to kill the Angel and keep the Meddling Mage (set to Lotus Bloom) at bay. Dovescape followed, setting up a safe barrier. Next up in the conga line of the enchantment hall of fame: Pernicious Deed. Now it was Andre who believed in his win, but with $7,000 US difference between 3rd and 4th place on the line, neither player let his guard down.

Shuhei set up Chalice of the Void for eight mana, getting eight tokens from the Dovescape. But Andre Müller had the Solitary Confinement that made Shuhei's outlook extremely dire—so dire, in fact, that Shuhei dropped his cards on the table and extended his hand to congratulate Andre Müller to a seat in the finals of Pro Tour–Valencia.

Meanwhile, Remi Fortier had won his match on the back table. "That matchup is so bad for me," a still beaming Andre Müller claimed. "He just destroys me with Venser." Also, Counterspell, Stifle, Counterbalance and Engineered Explosives spelled bad news for the German. But as he had already leveled up in the Pro Players Club and secured $22,000 US for his purse, Andre couldn't and wouldn't complain.

Andre Müller advances to the Finals!