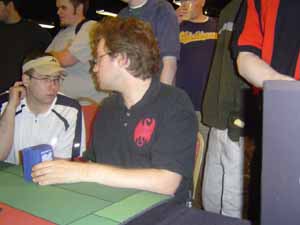 It’s surprising the table didn’t collapse under the weight of the accomplishments of these two players. Bob Maher, Jr., known to some as The Great One is a former Pro Tour Champ, a Player of the Year, and recently a Masters Champion. Alex Shvartsman is an Invitationalist, and has more Grand Prix Top 8’s than words in this sentence. Lately he’s been raising hell with those hoodlums in Illuminati, and is never without the red and black of YMG. This time around he’s playing “Bad Form”, and is convinced it’s the deck to play. Maher is likewise sure of his Red-White Control deck.

Shvartsman kicked off with a Lightning Rift, but Maher had a Silver Knight waiting. They both paired on the following turn, but Shvartsman wasn’t enthused about staring down a pair of Knights.

Maher swung in, and at the end of his turn Shvartsman cycled a Lay Waste to shoot him for four. Maher got some cycling of his own out of the way, going through an Eternal Dragon and then a Forgotten Cave. Shvartsman untapped and started looking for answers. A cycled Solar Blast dealt five, and he tapped out to dig with Starstorm. Maher beat in. Shvartsman made a third Rift, but made no play. Maher gained six with Renewed Faith, then bashed in again with his Knights.

Shvartsman tried not to look helpless as he passed the turn. Maher played his eighth land and shoved Akroma, Angel of Wrath into the Red Zone along with his Knights.

Shvartsman boarded in his creatures and Misguided Rages for his Incinerators and some burn. Maher brought in Temples of the False God, Decree of Annihilation and Oblation for Renewed Faith and Silver Knights. 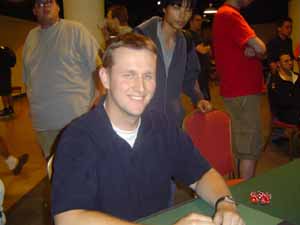 Maher remained calm as he played a Temple as his fourth land and played his third Rift. Shvartsman bashed him to six. A second Temple gave him seven mana, and on Shvartsman’s attack he cycled to kill Rorix on the attack. He fell to four. A second white mana and he was able to shoot down the Primoc and deal two to Shvartsman, and now it looked like Shvartsman was out of gas.

Shvartsman played another land and made no play. A third white mana from Maher let him bust out Akroma, Angel of Wrath. Shvartsman cycled Starstorm and fell to ten from the beats. He drew, cycled Startsorm, then cycled Solar Blast, but his last draw came up empty, and he offered Maher a congratulatory handshake.