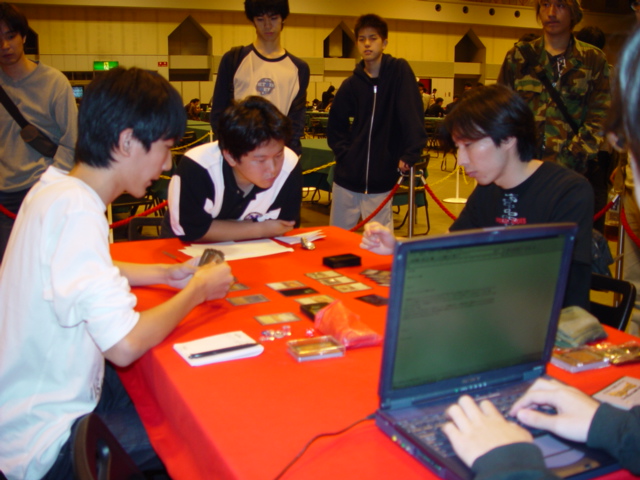 Rei Hashimoto is a pro player from about four years ago. He was the sort that was always winning qualifiers, but then never attending. The expense and school resposibilities kept him from all but a few tours. He never really left the scene, though, and he's back with a vengeance. His opponent, Masashi Oiso somewhat less of a star, and is frankly blown away by his success thusfar. Coincidentally, these two were the only ones at the table drafting white cards. Hashimoto has the better deck, but it's sure to be a close one.

Hashimoto started with a mulligan, but his next six were just fine. He led with Disciple, and then both players summoned Morphs. They traded hits, but then Oiso stalled at four land with no swamps. Battlefield Medic joined his team, but all offense was shut down by Aurafication. Hashimoto then left himself empty-handed, spilling out Whipcorder and Dive Bomber.

As cruel as Oiso's deck was, Hashimoto's was kind. It served up a huge topdeck of Dragon Roost. When Oiso still failed to make a move, it gave him land number seven. The crowd was all oohs and ahs. Oiso, on the other hand, was collecting his cards.

Oiso was on the offensive, if you can call it that, early on, thanks to a Gustcloak Skirmisher. Daru Healer meant it was only doing one per turn, and Battlefield Medics on both sides meant that ground creatures were useless. Whipcorder showed up to stop the Skirmisher, but Oiso just upraded to Aven Soulgazer.

Hashimoto made Grassland Crusader and took another one. He needed a flyer, but he had plenty of time to look for one. Starlit Sanctum shortened the clock somewhat, but it wasn't too worrisome. Pacifism took away the rest of Oiso's offense. Piety Charm freed his Soulgazer, and he dropped another one. Things were rapidly getting away from Hashimoto. He drew Dive Bomber only after Oiso had drawn his. Between the Sanctum and the four fliers, they were quickly on to game 3.

Hashimoto kept a spicy two-plains hand for the deciding game. Oiso couldn't keep his first seven, and went down to six. He started with Whipcorder. Oiso responded with Battlefield Medic. Hashimoto drew no third land, and passed it back with a grimace. Oiso could only smile as he made another Medic and missed his own third land drop.

Hashimoto called for "Magic". Mountain rose to the top of his deck. He played a morph while Oiso just sat there. He turned it over as Daru Lancer, and then started to tie up the Healers with his Whipcorder. Oiso had finally found a third plains for a Gustcloak Harrier. When he tried to block and spare himself damage with his untapped Medic, Hashimoto was ready with Shock.

From there, things just got ugly. Hashimoto started playing out 2/2 fliers of his own, as well as a Daru Healer to protect them. After the third one hit, Oiso had had enough.