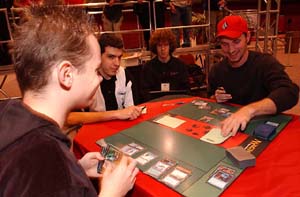 Canada's favorite son, Ryan "The Flash" Fuller has a virtual ten thousand dollars stuffed in his virtual pockets. Brian "Turbo" Hegstad of the US of A is in a similar position. They met on Saturday to do mortal combat. To the winner, a chance to face the winner of Humpherys/Walamies, and at least five thousand more. To the loser, the satisfaction that can only come from having sat still for over two hours.

Fuller is playing the Masters' most popular deck, Psychatog. His version runs no creatures besides the 'Togs themselves, and runs tons of cantrips to work its way through the deck. Repulse and Aether Burst clear the path for a final attack. Hegstad is with blue-green-white Counter-Enforcer. The two decks have similar construction, with counters, bounce, and a single big win condition maindeck.

The two shuffled thoroughly and began. A Peek from Fuller showed Hegstad's hand of Memory Lapse, Absorb, two Mystic Enforcers, Repulse and land. Fuller himself was sitting on three counters, but a pair of Psychatogs cluttered his draw. They traded land drops for a few turns. Hegstad missed his seventh, and on his eighth Peeked at Fuller's now two Memory Lapses, two Psychatogs, Undermine, Counterspell and Cephalid Coliseum.

Hegstad also Opted. Fuller needed a minute to decide to let it go. Hegstad kept a land and played it. Fuller took his turn and tried Psychatog. It sat on the stack patiently while Hegstad made up his mind. He Absorbed, with mana left over for Memory Lapse on Fuller's Counterspell. Fuller thought hard. He had just three mana left over. Countering would let Hegstad have free reign, possibly dropping two Enforcers.

He chose to let the Lapse resolve, then Lapse Hegstad's Absorb. Hegstad untapped. He Repulsed the Psychatog and made an Enforcer. Fuller replayed his 'Tog, not playing a land but wondering aloud if he had. Hegstad was baffled that he could not know that. Said Fuller "People think I'm pretty quick, but really, I'm simpleminded."

Hegstad made a second Enforcer on his turn. Fuller Counterspelled, Hegstad did the same, and Fuller Lapsed the Counter. Hegstad let that resolve, then played a second Counterspell. Things were looking grim for Fuller.

But then Fuller ripped Aether Burst, and was happy to do so. He bounced the untapped Enforcer and swung for one. He had Psychatog, Undermine and Counterspell in hand. Hegstad had two Enforcers, Counterspell and Absorb. The Enforcer hit again. Hegstad passed it back. Fuller drew Coliseum.

Hegstad accepted the one-point beats and untapped. He tried a second Enforcer. Fuller Undermined. Hegstad Counterspelled. Fuller Counterspelled. Hegstad showed him the Memory Lapse. Fuller let the stack resolve down to just the Enforcer. His last hope was to pitch to his 'Tog and Coliseum with one more mana up. He ripped Force Spike and Repulse, but could only keep one. He kept Repulse. The Enforcer resolved.

Now Hegstad had to think. Seeing Force Spike hit the grave made him wonder at the card Fuller kept. He decided to risk attacking with his unsick Enforcer. Fuller fell to seven. He untapped, drew Peek and Repulsed, getting a land. Peek showed Absorb and two Enforcers. Fuller ripped Fact or Fiction. The land he'd drawn fit perfectly to let him cast it.

Fuller was gushing. "That was EXACTLY what I wanted to happen!"

The spell revealed two Predicts, Repulse, a land and Fact or Fiction. Hegstad put the Predicts with Fact or Fiction. Fuller took them. There were sixteen cards in his graveyard. Fuller started counting it. Hegstad interrupted "That's thirteen and a half damage." From the crowd came murmurs of "Ooh, not enough."

Fuller attacked and removed cards to deal five. Hegstad was at ten. He untapped and did a little math. He made a second Enforcer and waited with four mana untapped. Fuller desperately needed a bounce spell to stop the twelve points of doom coming his way. He drew Memory Lapse! The Absorb he knew was in Hegstad's hand forced him to use Predicts to get to his cards. Four cards later, they were on to Game 2.

It may not sound like over an hour of play, but you'd be surprised what pros are capable of.

It was a Peek war for Game 2. Hegstad was on the wrong end. He needed his Peeks to go through to find him land. Fuller, having seen Hegstad's lack of land with a Peek of his own, was happy to tap out for Undermine. Hegstad's untapped Brushland and Disrupt in hand mocked him. 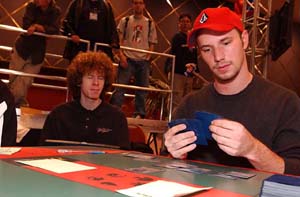 He failed to draw land on his turn, and when he Peeked again, Fuller Lapsed it. Then he did it again. The third time, Hegstad didn't even bother Peeking, for fear of being Peek-locked. He drew another non-land.

Fuller was busy being stuck at four land, nowhere near as bad as Hegstad's two. Hegstad's topdeck of Sungrass Prairie was bittersweet. Fuller found a Salt Marsh, and Hegstad's Coastal Tower still didn't let him out of the gates.

Facing the prospect of Hegstad having two blue mana and having drawn another nonland, Fuller played Fact or Fiction with seven cards remaining in hand during his mainphase. Hegstad Memory Lapsed. With his last untapped land Fuller played his one sideboarded Divert. The Fact or Fiction resolved, showing Lobotomy, Disrupt, Undermine, Psychatog and Repulse. Lobotomy and Undermine shacked up. Fuller took the rest, discarding Aether Burst and Repulse.

Hegstad still drew no land. Fuller did. Psychatog was happy to join his team. Hegstad tried to Absorb, but Fuller had Gainsay. Hegstad then drew his third Coastal Tower, sighing. Fuller counted with glee. He couldn't get past Fuller's countermagic shield, and died to the 'Tog.

But now it was Fuller's turn to stall on two land. Opt got Hegstad what he wanted. Fuller Peeked again, seeing an additional Lapse and Counterspell and being rewarded with island off the top. He subsequently pulled Salt Marsh.

Hegstad Peeked, seeing two Psychatogs, two Repulses, Aether Burst, Undermine and Fact or Fiction. The shortness in countermagic was good news. He played his fifth land and gave it back. Fuller drew another Burst and had to discard. Hegstad Peeked again.

Fuller drew Cephalid Coliseum. Hegstad played Fact or Fiction at end of turn. It was a brutal mix of two Enforcers, two Lapses and a Meddling Mage. The split was spells or creatures. Hegstad took spells. His next turn took five minutes at least. Staring at a pair of Meddling Mages, Memory Lapses and other countermagic, he couldn't find the best path. Two Sungrass Prairies limited his options. He chose to wait it out, discarding a Mage.

He did the same the following turn. With Fuller still trying to get to a reasonable number of lands, Hegstad played Fact or Fiction. He scored Absorb and two islands over Yavimaya Coast and counterspell. He then made a Meddling Mage, stopping Aether Burst. Absorb was discarded.

Fuller drew his second Psychatog and played it. Hegstad Lapsed. Fuller tried another. It resolved, but only because Hegstad had Repulse. 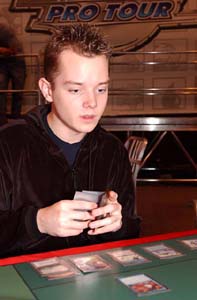 The game started rolling. Hegstad once again felt the novelty of the attack phase. Fuller went for his 'Tog again. It was Counterspelled. The second one was Lapsed, with Hegstad cycling a Disrupt. Predict put it in the graveyard and netted Hegstad two cards.

But then a remarkable thing happened. Fuller went for an end-of-turn Fact or Fiction, and Hegstad Lapsed. Fuller Lapsed back, and Hegstad let the stack resolve to the Fact or Fiction. He Predicted Memory Lapse on himself, drawing two cards. Still unable to counter, he had to burn Repulse on his own Mage.

And Fact or Fiction resolved. The cards came down two land, Fact or Fiction, Undermine and Disrupt. Fuller scored the first three. His Psychatog resolved easily. Hegstad replayed his Mage naming Aether Burst, but couldn't stop his Enforcer from being Undermined.

Fuller played a second Psychatog and started hitting. Another Fact or Fiction stuffed his hand and graveyard, and he got Lobotomy in the process. He was a turn away from victory. Hegstad held five cards. Fuller Lobotomized him, and Hegstad just dropped his hand.

Fuller was flabbergasted. He flashed Repulse. Hegstad shrugged and scooped. Fuller couldn't believe his luck. He left the Feature Match area in a kind of euphoria.