It was another battle in the war for website dominance here in the semifinals of Pro Tour Philadelphia. On one side, Josh Utter-Leyton, flying the banner of Team ChannelFireball, playing their metagame-audible midrange Zoo deck. On the other, decked out in the grey and white of his patrons at StarCityGames, sat Sam Black. Black is a PT fixture, and this weekend he finally got to sit under the Sunday Lights. He's playing what many are calling the definitive version of the Blazing Shoal poison deck.

It was an inauspicious start for Utter-Leyton, who mulliganed down to five. Uttered-Leyton led with Arid Mesa, and on his turn Black Preordained and kept both. Another Arid Mesa for Utter-Leyton, but still no play. Black fetched up a second Island and cast Blighted Agent. Utter-Leyton drew and passed it back. 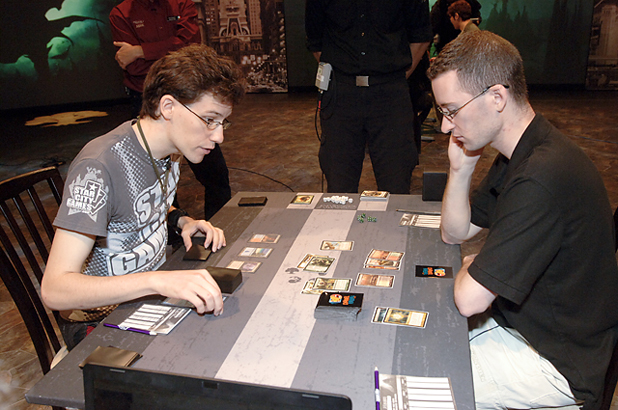 Americans Sam Black and Josh Utter-Leyton both have strong decks and the skills to pilot them, but only one can move on to the finals.

Black considered for a moment, then played Preordain, getting rid of both. He drew Gitaxian Probe and cast it for 2 life. Utter-Leyton fanned out a hand of two Lightning Bolt, Bant Charm, and two Elspeth, Knight-Errant. Black played Watery Grave untapped to go to 15, then hit for one poison and played a second Blighted Agent.

Utter-Leyton was in no hurry to crack his Mesas. He drew a Plains and played it, then let the two Agents bring him to three poison. At end of turn he searched up Stomping Ground and Steam Vents and hit one of the Agents with Bant Charm. Black responded with Peer Through Depths. He kept Blazing Shoal, and let the Charm resolve.

Utter-Leyton untapped and sat back on his mana. The writing was on the wall when Black swung in and pitched Progenitus to Blazing Shoal with full knowledge of the Bolts in Utter-Leyton's hand. Muddle the Mixture took care of the first and Spell Pierce the second, giving Black the first game of the match.

Utter-Leyton started at 17, fetching out Stomping Ground for Noble Hierarch. Black played Inkmoth Nexus and passed. Utter-Leyton took another 2 to get his Sacred Foundry into play untapped, but made no move. Black checked out the situation with Gitaxian Probe: Bant Charm, a second Hierarch, Tarmogoyf, and two lands. He played out a Spellskite, which was immediately destroyed by the Bant Charm.

Utter-Leyton untapped, played a Plains, and showed that he had drawn Green Sun's Zenith, casting it for two and bringing Gaddock Teeg onto the battlefield. He added a second Hierarch and passed. Black drew and passed right back to him.

An exalted Gaddock Teeg hit for 4 and was joined by Tarmogoyf, already a 5/6. At end of turn, Black cast Peer Through Depths, taking Snapback. Utter-Leyton played out his last card: A freshly drawn Aven Mindcensor. Now Black had to fight through both Gaddock Teeg and the Bird Wizard.

Black untapped and drew, then considered his options. He played a third land and continued to think. With a half-shrug he passed the turn. Utter-Leyton's creatures hit for 7, leaving Black at 7. He Peered Through Depths again, this time finding Slaughter Pact. 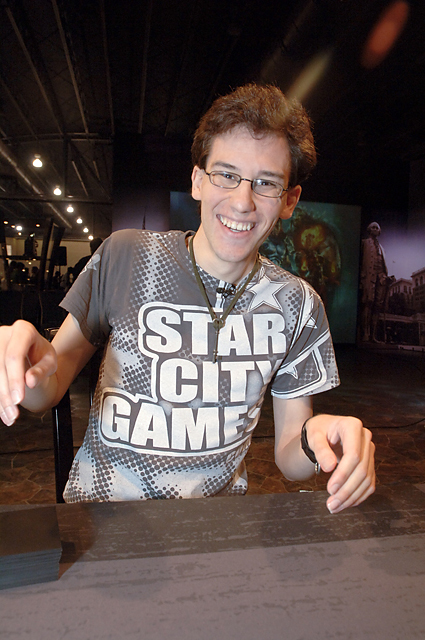 A still from the opening credits of Sam Black's little-known sitcom. Or not.

He untapped, Slaughtered the Mindcensor, pitched Preordain to Snapback, and went for the Shoal kill. Utter-Leyton picked up his hand, and for a moment the crowd held its breath... but then he scooped up the rest of his cards, and they let out a huge cheer.

While Utter-Leyton stepped away from the table for a moment, Black let out a sigh of relief. "This match-up is such a grind."

One of the crew stopped by, thinking that the match had ended, and Black responded, "Oh no, one more game," before correcting himself with a laugh. "Okay, technically one to three more games."

Utter-Leyton returned and they shuffled up for

Utter-Leyton opened with Grim Lavamancer and, after Black played Inkmoth Nexus, played a Misty Rainforest and held back.

Black drew his card and weighed his options. He chose Spellskite off a second Nexus. At end of turn, Utter-Leyton used Lightning Bolt and Grim Lavamancer to send it packing (with an assist from Misty Rainforest). Now it was his turn to decipher the situation. He fetched a third land and played Qasali Pridemage. Black pitched Disrupting Shoal to Disrupting Shoal to counter it. He untapped, played Scalding Tarn, and passed.

Utter-Leyton had a second Pridemage at the ready, and this one hit the battlefield without incident. Black Peered through Depths at end of turn and added Snapback to his hand. He played a fourth land and passed. Utter-Leyton swung for 3 and played Wild Nacatl. Black Peered again, taking Preordain. He fetched Watery Grave, killed the Pridemage with Slaughter Pact, then paid on upkeep. He spent his last mana on Preordain, getting rid of both cards. 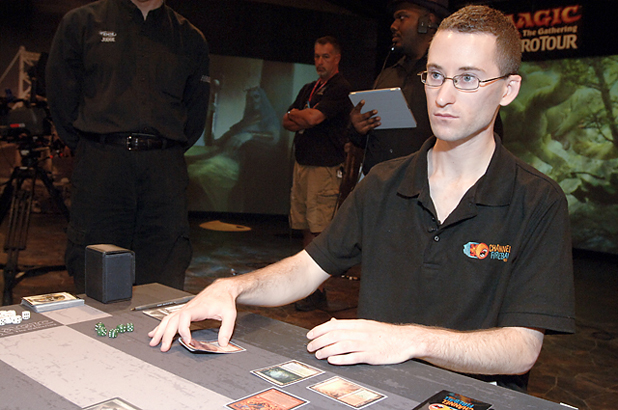 An implacable Utter-Leyton claws his way back into this match.

At end of turn, Black decided to make his move. Echoing Truth, targeting Grim Lavamancer. Utter-Leyton shot him for 2 and let it resolve. Next, Snapback targeting Aven Mindcensor. Utter-Leyton responded with Lightning Bolt, and they were on to

with Utter-Leyton now only one game behind.

Utter-Leyton kept his opener, but Black went down to six. Utter-Leyton led out with a fetched Stomping Ground for Wild Nacatl. Black played Inkmoth Nexus and passed. Arid Mesa got Hallowed Fountain, and Utter-Leyton hit for 3 before playing Gaddock Teeg.

Black untapped. He paid two life for Gitaxian Probe and saw a hand of Flashfreeze, Tectonic Edge, Path to Exile and Horizon Canopy. He drew for the Probe, and passed the turn without playing a second land. Utter-Leyton dropped him to 10 and sat back. Black drew a second Probe and went to 8 to cast it. He played Scalding Tarn and passed. Utter-Leyton hit for another 5. Fetching an Island dropped him to 2. He cast Peer Through Depths and took Blazing Shoal. He drew for his turn, then scooped up his cards.

"I guess I can't be too unhappy about missing my two-outer there on my last turn," said Black with a laugh.

Black put Utter-Leyton on the play again for the deciding game, and he led out with Stomping Grounds, Wild Nacatl. Black played Island and Pondered, choosing to keep the cards. Utter-Leyton fetched Hallowed Fountain and tapped two for Qasali Pridemage. Black countered with Disrupting Shoal, pitching Blighted Agent. Utter-Leyton hit him to 17 and passed. 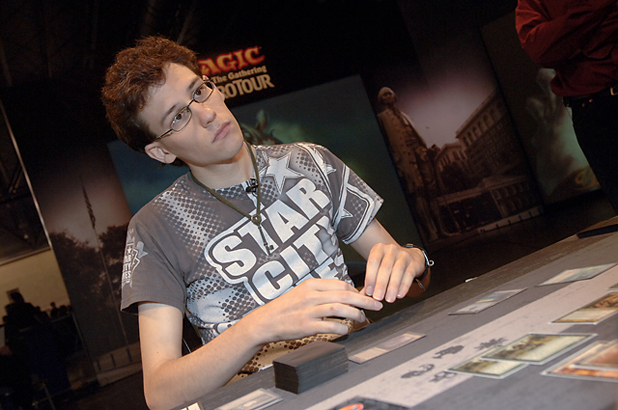 Utter-Leyton fetched Dryad Arbor at end of turn, then untapped, played a Sacred Foundry untapped and hit for seven. Black was down to just 2 life. He tapped out for Peer Through Depths. Utter-Leyton went for Lightning Helix and Black threw down Disrupting Shoal, pitching Blighted Agent. He Peered into Ponder, and the crowd started murmuring. He untapped and Pondered, and the crowd grew louder as he plucked each card. He sent them all back in a shuffle, left with just one more draw. The crowd was calling him to rip the win. He laid his hand out on the table to show Utter-Leyton what was up: He needed to draw a Blazing Shoal.

With a flourish, Black threw down the top card of his library without looking, to reveal... Inkmoth Nexus.

Black extended his hand in congratulations.

Josh Utter-Leyton defeats Sam Black 3-2 and advances to the finals!