Brian David-Marshall is a New York–based game designer who has been involved with Magic since 1994, when he started organizing tournaments and ran a Manhattan game store. Since then, he has been a judge, a player, and one of the longest-tenured columnists on DailyMTG.com, as he enters his second decade writing for the site. He is also the Pro Tour Historian and one of the commentators for the Pro Tour.
Share Article
Share Tweet Share
matchup has a lot on the line beside who would advance to the finals to face the winner of Billy Moreno/Chris McDaniel. A win by Kenji Tsumura would give him a prohibitive lead in the Player of the Year race heading into Worlds. Antoine Ruel could emerge as a dark horse candidate in the race with a win as well. More than that though it was a battle to determine which Tog deck would reign supreme for the ensuing Extended season. 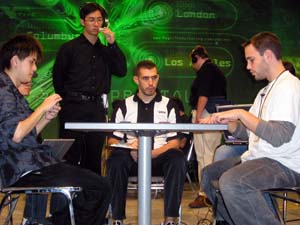 Plenty of Pro Tour power sat in the semifinals between Tsumura, left, and Ruel.

"I hope these mints are not poisoned," laughed Antoine Ruel as he accepted mints from his opponent before the match. "That would be a nice way to win a match."

Of course, according to the playtest teams on both sides of the table that might be the only chance Kenji had to win this thing. With Kenji testing his own end of the matchup and some of the best and brightest of Japan playing the Ruel end of things, Kenji lost sideboarded games 9-1 in practice Sunday morning.

Because there was no traditional card drawing in Kenji's deck, Ruel could focus his attention on countering Gifts Ungiven and killing any Togs that might slip through the cracks. With only one Life from the Loam in the deck, he would need to luck into it if his Gifts did not resolve.

Kenji 'wastelanded' Antoine with Oboro, Palace in the Clouds. Antoine just shrugged it off and went straight to three mana for Psychatog on turn four. Kenji went to 17 at the end of the turn and played Last Gasp. Antoine saved his Tog by removing two cards and pitching Boomerang. Kenji played his own Tog but Antoine promptly Smothered it.

Kenji attempted Gifts Ungiven but Antoine had the predicted countermeasures, although he did not have any answer for the next one at the end of the following turn. The potential Player of the Year spread out a buffet of Tog, Deed, Smother, and Putrefy. Ruel let him have Tog and Deed. Pernicious Deed hit the board but Kenji was one mana shy of being able to kill the Tog - the only thing he could manage would be to Deed for zero and take out one of Ruel's lands. Instead he broke a fetch land for Watery Grave and countered Thirst for Knowledge.

Ruel untapped and showed Kenji - who was at 10 - a tough combination: Fact or Fiction and a fourth land. Kenji didn't need much time to do his sums and they were on to the second game. Antoine told Kenji he was not so sure that the game would have turned the same way had the Japanese player put out the Tog instead of Deed.

Ruel played a turn-two Duress and Kenji Mana leaked it. Ruel had the opportunity to Force Spike it and tickled his Island thoughtfully but was content to trade Duress for Leak. Kenji mush have read the contemplation as bluff because he trotted Tog right out there on turn three into Force Spike. 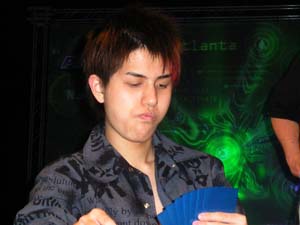 Kenji had no plays for a couple of turns while Ruel had no lands. A second Duress was met with Counterspell. Ruel found land number four. He cast Thirst for Knowledge end-of-turn and discarded Boomerang and Swamp - he had obviously found more.

The third Duress of the game hung on the stack. Kenji bored a hole in his hand staring at his cards, trying to determine the best way to play. Finally he laid in the table and revealed Tsabo's Decree, Cunning Wish, Swamp, Circular Logic, and Life From the Loam. He took the counter spell and played Dr. Teeth. Kenji responded with Cunning Wish for Force Spike. Antoine paid, knowing full well he would be on the receiving end of Tsabo's Decree next turn.

Ruel showed him a formidable hand with Force Spike, Counterspell, Logic, land, and Facto or Fiction after the Decree resolved. Ruel used the FoF and took Duress over four lands. He decided to save the Duress for a rainy day and passed the turn planning on turning on his Stalking Stones. When he did that Kenji cast Gifts in response for four lands - three of which cycled. Ruel looked crushed by the topdeck.

Stalking Stones started to get to work and Duress put Life from the Loam in the bin. Kenji cycled the Tranquil Thicket Ruel had given him. He had to use a pain land to cycle it. Kenji also had to use the pain land to cast the Loam he had just dredged. Ruel activated his Coliseum and countered the spell with Logic. He also drew into Tog along the way.

Kenji tried to dredge and cast Loam again but Ruel had the Counterspell. He knew there was nothing in Kenji's hand since he had not drawn off his deck for the last two turns and was able to just pump his deck without any threat of resistance.

Kenji led off with a fetch land and his reluctance to crack it indicated that he was hoping to draw more. At least that's what was happening on Ruel's end of the table. Kenji missed land number four and Ruel got his Thirst for KnowledgeForce Spiked. He also missed land four. Both players got back on track the next turn and Ruel Duressed. He saw Tog, Logic, Mana Leak, and two Deeds. Ruel took the Leak and consulted his scorepad for a Japanese phrase from a popular manga.

This apparently means, "You don't know it but you are already dead."

Ruel countered one Deed. His attempt at Skeletal Scrying was countered with a Force Spike. He drew out the Logic with an end-of-turn Fact or Fiction and played Tog into the Deed.

He nibbled away with the Tog and tried Duress. Kenji showed him two Cunning Wish and a Tog. He took one and countered the other with Logic. Ruel tried to bait Kenji into blowing the Deed by pumping the Tog with his graveyard. 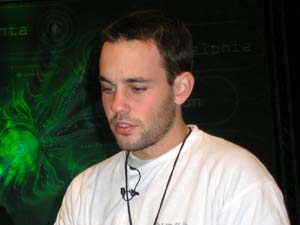 Ruel's Tog kept the pressure on Kenji in Game 3.

He went back to one point a turn. Kenji was at 11. Ruel Boomeranged the Deed end of turn and Kenji traded it for the Tog. Ruel led off his own turn with Duress and saw Leak, Wish, Spike, Logic, and Tog. He took the Wish. He offered up a fresh Tog and he let Kenji Mana Leak it.

Kenji untapped and played his own Tog that had been hanging around for so long. Ruel Smothered and won the brief ensuing counterwar.

Kenji ripped Gifts off the top, offering Loam, two cyclers, and Island. Kenji got to keep Island and the blue cycler. Kenji cycled the land and dredged up the Loam and picked up three cyclers. Ruel tapped him out with Force Spike.

Ruel had long ago decided that he was going to win the game with Meloku and this was as fine a time as any for the legend to see play. Antoine had not played a land so he was able to pick one up and toss one of his Pro Player Cards on the table as a token.

Meanwhile Kenji sent his deck into overdrive cycling and dredging for a quick answer to the legend - he would need to find and resolve Deed. Ruel decided to animate his Stalking Stones at the end of Kenji's turn and the Japanese player cast Gifts in response. Kenji did not have many cards left in his deck and seemed to have a hard time finding four cards of somewhat equal value. Ruel gave Kenji Wish and Duress over Smother and Putrefy.

Kenji cast the Wish and Ghastly Demised the Meloku. Ruel untapped and looked at the thin library across from him and briefly toyed with the idea of using double Deep Analysis and Cephalid Coliseum. He decided that he was better off with two more cards in his own hand and did that instead. Kenji fell to 1 on the attack.

Kenji opted to dredge rather than draw and only had nine cards left in his library. He cast the dredge spell and cycled but found nothing. Ruel now had two options to kill him - he could attack or deplete his six-card library with two Coliseums. One was enough and Ruel was on to the finals.

Not many players could emerge from a bracket with three of the top Japanese Magic players in the world and make it look easy but that is exactly what Antoine Ruel did. He was going to playing in the finals against either of the two less-experienced Americans who were still slugging it out on the back table.

As I walked away to finish this story, Antoine shouted out to me, "Hey Brian, point out to Randy what he said about my deck being [expletive deleted]!"

"I did tell him already, Antoine. He has already spoken about it in the webcast."

Antoine smiled; he could taste how close he was to the first Pro Tour victory for the Ruel family. "Remind him again."