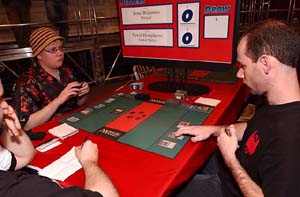 Ah, the joys of being on the Masters. Walamies had a sub-optimal performance in the Pro Tour this weekend going 1-4, but he "put up a good fight". Flying to the United States all the way from Finland only to scrub out in the Pro Tour may have been disappointing for Walamies, but the Masters made it all worth it. At the time of his Semifinal match with Humpherys, Walamies was guaranteed to walk away with at least $15,000. Meanwhile, Humpherys is looking to advance to tomorrow's finals, where a win would make him the second player to win a Pro Tour, Grand Prix, and Masters. The only other player to accomplish this so far is Michael Pustilnik.

Walamies asked me to send greetings to his dog Pyry. I asked him if the dog could read, and he assured me that was the case. He also assured me that his dog knew how to use a computer and operate a mouse. Dogs from Finland must be a lot more intelligent than the dogs over here in the United States.

Humpherys mulliganed his opening hand, and thought for a bit about his six card draw. He finally decided to keep it. Both players put down blue sources of mana for the first few turns until Walamies Recoiled one of Humpherys' three islands back to his hand. Humpherys discarded Psychatog. Walamies summoned a Psychatog, and it was Counterspelled. A Nightscape Familiar was played, and resolved on Walamies' side, and started to bash Humpherys soon after. Walamies cast Fact or Fiction on Humpherys' end step, and it was Syncopated for two, leaving Humpherys tapped out. Walamies used the opportunity to play Probe with kicker. Humpherys thought about what to discard. For those who aren't aware, the Masters is an untimed event.

In San Diego, David Humpherys was deciding which two spells to discard to Probe.

Somewhere in rural Iowa, paint was drying on a new barn.

Syncopate and Recoil were discarded, and Humpherys took his turn, missing his fourth land drop. Walamies brought out Shadowmage Infiltrator, which resolved. Humpherys drew, and was still stuck at three lands. Finkel and the Familiar headed into battle, and Walamies was now drawing two cards a turn, while Humpherys was struggling to find another land. A second Finkel joined in on the fun, and Walamies was now drawing two extra cards every turn, while Humpherys was helpless to do anything about it. He finally found an Underground River, but it was much too late. Humpherys conceded soon after.

Humpherys untapped, and summoned Psychatog, followed by an Infiltrator. At this point, Walamies had two Skeletal Scrying and one land in his hand, and only one card in his graveyard. Humpherys cast Lobotomy on the following turn, and Walamies responded with Skeletal Scrying for one. This dug him into Gainsay, which was added to the stack. Humpherys now began to consider his options. He decided the Lobotomy was not worth fighting for. Walamies drew and simply said "Go", and Humpherys cast Fact or Fiction on end step. The piles presented were Shadowmage Infiltrator, two islands and Nightscape Familiar, Sulfur Vent. Humpherys took the three card pile. 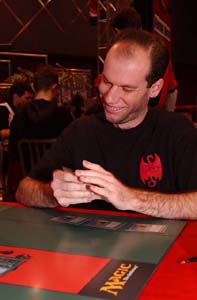 A few turns later, Humpherys played another Fact or Fiction, gaining even more card advantage. He untapped and played Duress, but Walamies responded with Skeletal Scrying for two. He then added Recoil to the stack, targeting Psychatog. It resolved, and Humpherys pitched an island. Duress now resolves, and Humpherys saw Walamies' hand, which contained two swamps and Temporal Adept. He replayed the Psychatog, and ended his turn. Humpherys untapped, and contemplated the proper play.

At this moment all around the world, the circle of life continued. New babies were being born, and old men were passing away. Some inhabitants on the planet Earth were happy, some were sad, and many were just content.

In San Diego, David Humpherys was deep in thought, thinking over the best play that would help him win the game. Time continued to pass as the new and old shifted in their infinite cycle.

Humpherys eventually played a second Infiltrator. Walamies cast Duress, but it was Counterspelled. A third Finkel joined Humpherys' side, but the game was still at a stalemate. Walamies brought out his own third Infiltrator, and it resolved. The next few turns saw very little action, as the black/blue gold creatures sat at opposing ends of the table, staring down at each other. Walamies had a potentially game breaking Temporal Adept, but it headed right to the graveyard after a lengthy counterwar. The next turn saw Humpherys tap all his mana and cast Upheaval, leaving two mana floating. He then played a land, and brought out Psychatog. Walamies conceded a turn later. 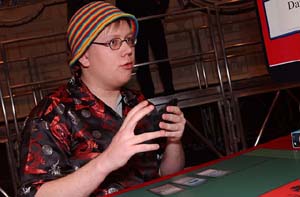 Psychatog came into play on Walamies' side, and was Repulsed on end step. This allowed Humpherys to Lobotomy Psychatog, and it also revealed that Walamies' hand contained nothing but two lands. This gave Humpherys the green light, letting him know that Walamies had no threats or answers in his hand. But would he be able to take advantage of it? He brought out Psychatog a turn later, but Walamies had topdecked a Counterspell. Still, Humpherys had a Shadowmage Infiltrator, which resolved without any problems.

The Nightscape Familiar was Repulsed, clearing the way for Johnny Magic. It attacked, and Humpherys played a second Infiltrator. Walamies then replayed the Familiar, which would at least cause Humpherys to draw only two cards a turn instead of three. Regardless, things were looking bleak. The extra card advantage gave Humpherys complete control of the game, and even though Walamies tried his best to disrupt the way the game was headed, victory was a mere formality.

As expected, the spectators were completely enthralled by the pace of this game. If Magic was still on ESPN2 and this exciting match was being shown around the world, viewers would need to make a tough decision between this or the World Championships of Watching Grass Grow.