The last time that Jon Finkel and Brian Kibler were in a Pro Tour Top 8 together, it was Pro Tour Chicago in 2000, a contender for the greatest Top 8 of all time. Kai Budde "The German Juggernaut" went on to win that event, which proved to be a big part in cementing his position as a superstar of the game.

More than a decade has passed since Chicago, and this time around Finkel and Kibler, two of the game's all time greats, are the juggernauts that nobody wants to face in the Top 8. And now, in the semifinals, the two juggernauts clash, in what is sure to be nothing short of epic. 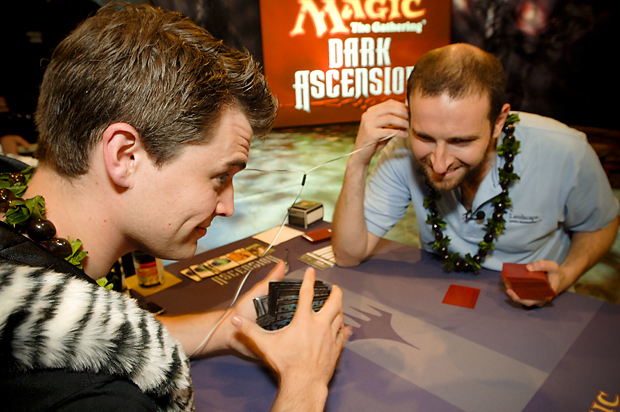 The two Pro Tour juggernauts clash in the semifinals.

The first game started fairly evenly as Finkel use Mana Leak on a Rampant Growth, and Kibler retorted with Galvanic Blast on a Drogskol Captain before accelerating with his second Rampant Growth.

Kibler fearlessly tried for a Primeval Titan as soon as he got to six mana, but Finkel had a Snapcaster Mage to flashback his Mana Leak.

Now out of counterspells, Finkel tapped out to cast a Drogskol Captain, and a Delver of Secrets – giving Kibler a perfect opportunity to resolve an Inferno Titan.

Finkel had a Dungeon Geists to tap down his opponent's Titan, but a second Inferno Titan made short work of the 3/3 flier. 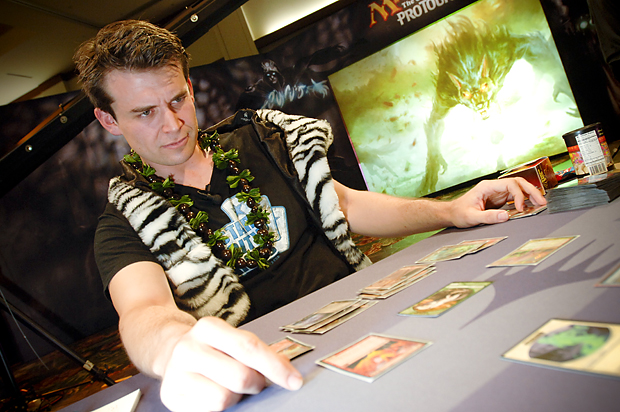 Finkel played a Drogskol Captain and a Phantasmal Image to copy it, but when his board got swept away by a Slagstorm, Finkel wasted no time before picking up his cards and reaching for his sideboard.

Kibler kicked off the second game with a mulligan, prompting Finkel to pump his fist, and Raise the Roof.

Brian Kibler: "It's just like (Chris) Pikula said, if you don't pump your fist when your opponent mulligans you're lying to yourself... and if you aren't inwardly chanting 'five, five, five'..."

Jon Finkel: "Are you kidding? Inside I'm chanting 'four, four, four'. If you mulligan to five I might still lose, and that would be humiliating."

Kibler did in fact mulligan a second time, prompting Finkel to once again pump his fist.

Jon Finkel: "The sad thing is, now I'm probably only about 65% to win this game."

Finkel's early Delver of Secrets died at the hands of a Galvanic Blast, and his follow-up play of Lingering Souls got matched by a Huntmaster of the Fells.

Finkel flashed back his Lingering Souls to make more spirits, but when Kibler passed his turn without playing any spells, there was nothing that Finkel could do to stop the Huntmaster from transforming into a Ravager of the Fells.

After the Ravager took out a spirit token, Finkel drew for his turn and cast a Drogskol Captain and a Phantsmal Image, threatening to give himself an army of spirits with hexproof. Kibler didn't want this to happen, so he responded to the Phantasmal Image by using a Combust to take out the Droskol Captain.

A turn cycle later, and Ravager of the Fells had transformed back and forth, generating another wolf token and eating Finkel's Phantasmal Image.

A replacement Drogskol Captain came down for Finkel, giving the Pro Tour Kuala Lumpur Champion a very real board presence, and a couple of copies of Mana Leak were enough to protect the spirit army from a Slagstorm.

After taking a few lumps, Finkel found a Dungeon Geists which he used to tap down the Huntmaster of the Fells and put himself ahead in the race...but that lead wouldn't last long, as Kibler cast an Inferno Titan, taking out Jon's Drogskol Captain, and giving himself a dominating advantage.

At this point, the head judge stepped in and paused play, as there was a question about how many wolf tokens Kibler should have in play.

After reviewing the tapes, the judge staff realized that Kibler and Finkel had both forgotten to get rid of a wolf token that had traded in combat with a Spirit token.

In most tournament situations, it would be impossible to repair the game state, and the players would need to continue the game with the additional wolf in play. But thanks to the fact that the match was on camera, the judge staff was able to step in and get things completely cleaned up by removing the extra wolf token and adjusting Finkel's life total.

Even with things straightened out, Finkel still needed to deal with the Inferno Titan fast in order to get back into the game.

Finkel drew a Ponder and immediately cast it. After doing some quick math, Finkel decided that the first three cards he saw weren't going to be enough, so he decided to shuffle his library in hopes of finding something better. 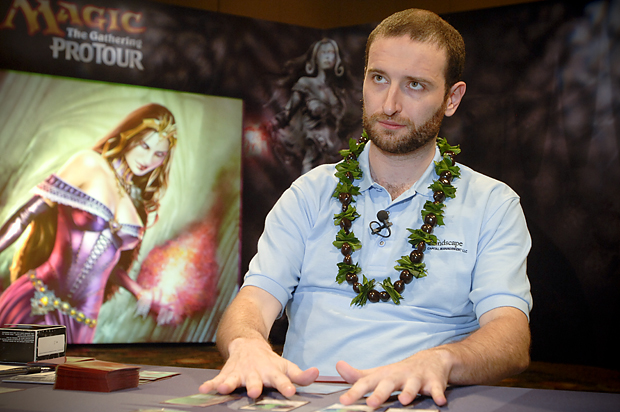 The Magic legend contemplates what he needs to draw in order to pull out a victory.

Finkel's singleton Celestial Purge certainly seemed to fit that bill, as he used it to exile Kibler's Inferno Titan, allowing him to fly to victory a couple of turns later.

A Snapcaster Mage drew out a Galvanic Blast, allowed Finkel to reuse his Gitaxian Probe, and even gave him some fodder for his Moorland Haunt, but Finkel knew that he would need a lot more than these little edges in order to beat Kibler's explosive ramp deck.

Another Gitaxian Probe let Finkel know that Kibler had drawn an Inferno Titan, while a Thrun, the Last Troll, and a Huntmaster of the Fells gave Kibler some extremely difficult to deal with damage sources.

After taking some hits, a Phantasmal Image allowed Finkel to deal with Thrun, the Last Troll, and a Mana Leak let him counter a Primeval Titan. Lingering Souls gave Finkel some more spirits, and a Dungeon Geists tapped down a Huntmaster of the Fells.

Finkel was certainly gaining ground, but he still had a lot to overcome.

When Huntmaster transformed into Ravager of the Fells which, along with an Inkmoth Nexus, allowed Kibler to take out the Dungeon Geists, it was clear that Finkel again needed to draw something good if he was going to take the third game. 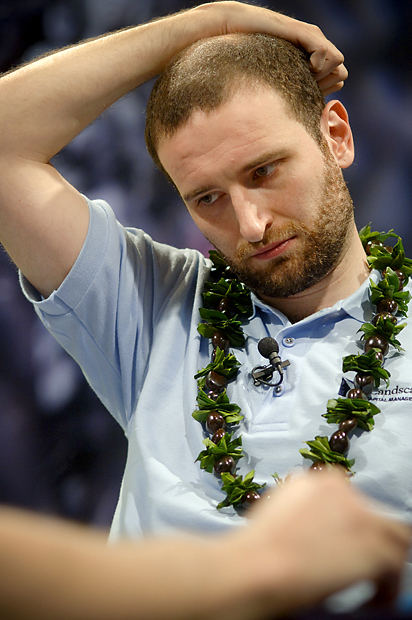 Finkel agonizes over what he needs to pull ahead.

The top of Finkel's deck didn't disappoint, as he again found his singleton Celestial Purge.

Finkel used the Celestial Purge to exile a Ravager of the Fells, and a Dissipate to counter a Slagstorm, and suddenly it seemed as though all of the little advantages that Finkel had picked up over the course of the game would culminate into a victory.

A Thrun, the Last Troll gave Kibler a bit of pressure, but when Inferno Titan got countered, Finkel was able to fly to a 2-1 lead despite struggling through much of the third game.

Kibler: "Come on man, you already have three wins. I need a second. Share the wealth!"

Kibler shot off to an early lead with two Rampant Growths and a Galvanic Blast to deal with Finkel's Insectile Aberration.

Finkel's third turn Lingering Souls gave Kibler an opening to resolve a Primeval Titan, and it looked like the game would soon be over...

But when Primeval Titan got tapped down by a Dungeon Geists, and a Huntmaster of the Fells got outclassed by Drogskol Captain and a Phantasmal Image (that came into play as a Drogskol Captain), suddenly Kibler was the one in need of a miracle to get himself back into the game. 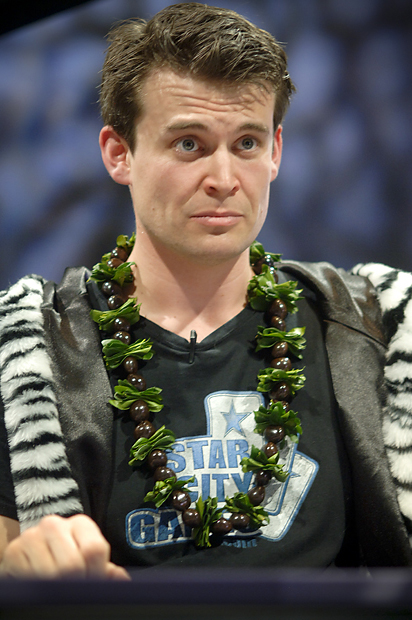 Down two games to one, Kibler needs a miracle from his deck if he wants to bring the match to a final game.

"Is that a Slagstorm?" asked Jon, as Kibler built up tension in the room by moving the top card of his library face down on to the table, and slowly inching it closer, and closer to his hand.

Kibler didn't draw the Slagstorm...but he did find the only other out in his deck! A second Whipflare teamed up with the one in his hand to clear Finkel's board and free his own Primeval Titan.

Finkel tried to get himself back into the game, but when Kibler's deck continued to feed him titans, there was simply nothing that Finkel could do.

Kibler: "This game's for all the marbles! Or at least seven marbles...but they're big marbles. You know, the shooters." 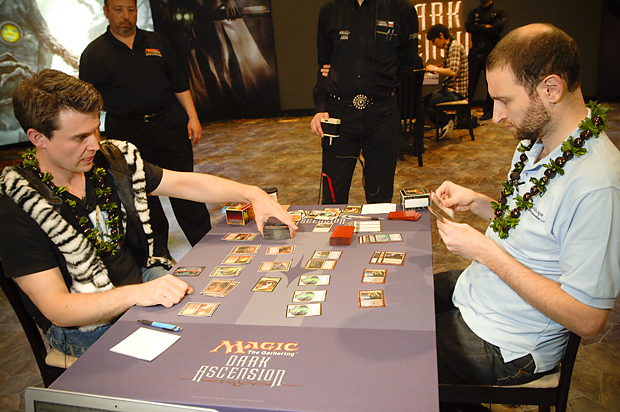 Kibler fires away with some Huntmasters while Finkel fills the skies with spirits in the exciting final game of the semifinals.

A Snapcaster Mage let Finkel filter through his deck a bit more with Ponder, while a Green Sun's Zenith gave Kibler a second Huntmaster.

Not wanting to fall behind this early in the game, Finkel used his Celestial Purge to take out a Huntmaster of the Fells. A Snapcaster Mage a turn later gave Finkel a second use out of his Celestial Purge, leaving Kibler, who had seemed to be light years ahead just a turn prior, with just a wolf token and lands.

Kibler could do nothing but attack with his wolf, but with a Moorland Haunt activation and a Lingering Souls later, most spectators assumed that Kibler was in a spot where he needed to topdeck a board sweeper for the second game in a row if he was going to advance to the finals...

Kibler drew for his turn and attacked with his wolf. Finkel did some quick math and, wanting to ensure that he would be able to fly to victory on his next turn in spite of a pair of copies of Inkmoth Nexus that Kibler had held back, chose not to block with any of his spirits, falling to 8 life.

After combat, Kibler played a second Sphere of the Suns and activated an Inkmoth Nexus to give himself metalcraft.

He then cast a Galvanic Blast to knock Finkel to 4.

Kibler then tried for a second (lethal) Galvanic Blast, but Finkel had a Negate to counter it.

However, a third Galvanic Blast was just enough to give Kibler the win.

Finkel: "I guess I should have blocked.

Brian Kibler wins 3-2 and advances to the finals!