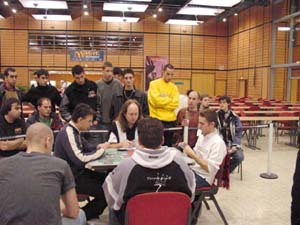 These two players represent the inexperienced half of the competitors still playing in this Grand Prix. They're both from Switzerland; they even play together regularly and test for big events. That testing seems to have finally paid of as they find themselves within striking distance of their first major tournament title. But first they have to eliminate a friend and teammate.

won the die roll and chose to play. He mulliganed his first hand but was happy with the next 6. Bruno kept his hand.

Daniel had apparently mulliganed into something rather nice as he played a Spikeshot Goblin on turn 3 and a Granite Shard on turn 4. A Crystal Shard stunted his development somewhat but the Goblin could prove to be rather problematic for Bruno's UW deck to deal with. An Icy Manipulator and a Yotian Soldier kept Bruno fairly safe from any attacks but that wasn't the way in which Daniel was planning to win this game anyway. He started pinging Bruno for two a turn and was content to sit back. A Somber Hoverguard complicated matters a little as Daniel could shoot it for two every turn but Bruno could just save it with the Shard and recast it for the bargain basement price of one mana.

They settled into a routine of shooting and bouncing until an Altar's Light from Bruno destroyed the Shard. A Clockwork Condor had showed up by then though and the game still wasn't going anywhere. A Skyhunter Patrol gave Bruno some extra flying power and with the Icy Manipulator tying up the Clockwork Condor the first combat damage of the game was finally dealt. It was also being dealt in increments of 5 putting Daniel on a very respectable clock and scrambling for answers. The answer presented itself the next turn as an all out attack that forced Bruno to block Daniel's Nim Replica with a Soldier Replica. He then sacrificed it to kill an Ogre Leadfoot and Daniel cast Roar of the Kha in response saving both his creatures. This also allowed Daniel to shoot for two with his Spikeshot forcing Bruno to bounce it and getting it out of the way for a turn. This dramatic turn of events put Daniel firmly in the driver's seat as Bruno's side of the board was completely destroyed. A Mindslaver put the final nail in the coffin and the players were on to game 2. 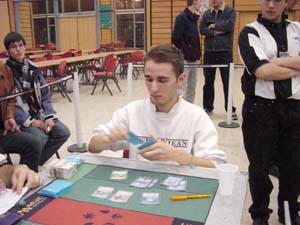 Bruno decided to play first for the second game and the game got underway with both players keeping their hands. Daniel's Leonin Den-Guard was met with a Lumengrid Sentinel that got burned by a Pyrite Spellbomb. Bruno replaced it with a rather more impressive Skyhunter Patrol. Daniel played a Skyhunter Cub looking for some equipment to put on his guys. His first attempt at one, a Leonin Scimitar, got Annulled and all he had was another Den-Guard. Meanwhile Bruno fortified his position with a Soldier Replica and a Skyhunter Cub.

The Patrol was the only creature in the Red Zone for a couple of turns until Bruno came up with another threat in Somber Hoverguard. A Taj-Nar Swordsmith finally got Daniel a piece of equipment to boost his white creatures with but Bruno looked to be too far ahead for it to matter. The Soldier Replica allowed Bruno to attack right through a Cub with a Scimitar and the game went on like this for a while. Finally an Aether Spellbomb got the Cub out of the way of the Hoverguard speeding up Daniel's inevitable death a little.

Daniel chose to play and kicked things off with a third turn Granite Shard. Not the fastest of starts for both players. Bruno played the first creature of the game in a Yotian Solder. Daniel responded with a Loxodon Punisher. A Shard bounced it out of the way of the rampaging 1/4 and first blood was extracted. A Leonin Den-Guard came down next. Daniel had obviously drafted an equipment based deck although he hadn't shown a lot of actual equipment yet. Bruno's deck seemed to just consist of good fliers with some very good backup in Icy Manipulator and Crystal Shard. A Clockwork Condor for Bruno was an actual threat as well when backed up with the Shard. That appeared to be the direction the game was going. Clockwork beatings. 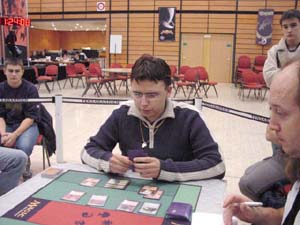 Bruno let the Condor fall to 1/1 though and now he had to wait for Daniel to use his Granite Shard before bouncing it with his Shard. Daniel obliged at the end of his turn but he had a Bolt to get rid of the Condor anyway. After that, the game became a staring contest. Actually, that's what it was supposed to turn into but Daniel had other ideas. He attacked with his Vulshok Berserker, unequipped Den-Guard and unequipped Punisher into Bruno's Soldier Replica and Yotian Soldier and ended up trading his Punisher and a Roar of the Kha for the Replica.

There really seemed no reason to do all that but he made up for that apparent mistake by drawing and playing a Taj-Nar Swordsmith. He searched out a Loxodon Warhammer. Now Bruno had to find a way to deal with the equipment fast or Daniel would get way too far ahead on life for him to effectively race with his fliers. Soul Nova did just that, and more. It completely swung the game back in Bruno's favor and a Mindslaver didn't really seem like a good answer especially when it tapped Daniel out. This caused him to have his last creature bounced and left him permanent-less except for the Slaver and the Shard. Bruno, in the meantime, was attacking for 5. The Mindslaver forced Bruno to bounce his own Patrol and Dragon Blood Daniel's Berserker but it was too little too late as Daniel's costly mistake as well as the devastating Soul Nova proved to be too much for the young Swiss.