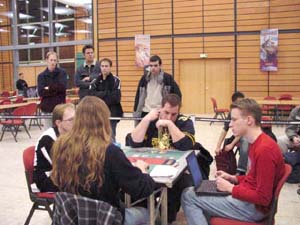 started off rather quickly with a second turn Iron Myr and third turn Goblin Replica. The Grey Ogre was good enough to keep Yann's second turn Slith Predator at bay, but the Frenchman added a Tel-Jihad's Chosen to his forces. Jeroen played a Fangren Hunter on his fourth turn and it would be the first creature to actually attack in this game. The Dutchman cast another Myr and a Frogmite and Yann finished off the Goblin Replica with an Irradiate as he had two artifact lands out.

The Frenchman cast a Woebearer one turn later but that too wouldn't stop Jeroen's Fangren Hunter. Yann Deconstructed the Frogmite and played a Mirror Golem with protection from artifacts and creatures. His Slith Predator, Tel-Jihad's Chosen and Woebearer proceeded to make their entry into the red zone, where the Predator traded with one of Jeroen's Myrs. The Dutchman's Electrostatic Bolt finished off the Mirror Golem and he swung back for 5 damage, putting Yann at 7 life.

Yann's Woebearer returned his Mirror Golem back to his hand and he replayed it. Spikeshot Goblin and Dross Prowler made it into play next and Jeroen put an end to the threat of Yann's fear creatures by paying the full 7 mana for a Myr Enforcer. That wouldn't stop the Mirror Golem though and it dropped Jeroen to 8 life. He didn't have a play on his turn, and Yann's all out attack was enough to finish the Dutchman off. 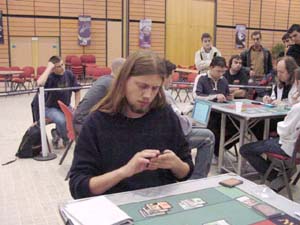 This time it was Yann who opened with a second turn Myr but Jeroen wouldn't have any of it and finished it off with an Electrostatic Bolt. Yann wasn't too unhappy about that, as his Spikeshot Goblin survived. He added a Tel-Jihad's Chosen to his side of the board as Jeroen was only playing lands, and no creatures. A Battlegrowth made sure Yann's Goblin was big enough to finish off 2/2's as well now.

Sylvan Scrying fetched a Swamp as his fourth land. In the meanwhile Jeroen was just sitting there like a true goldfish for Yann – not even on turn seven did he play anything. Woebearer joined forces and Yann looked at Jeroen with puzzlement. The Dutchman played his second spell on turn 8, a 7 mana Myr Enforcer but it wasn't enough to stop Yann's creatures.