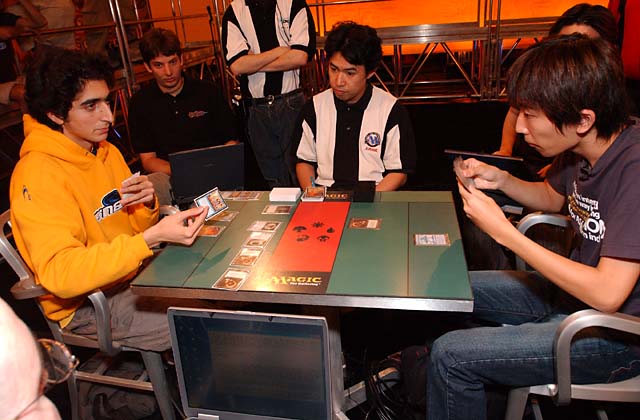 Nassif, who was once known as Yellow Hat, is sporting a yellow sweatshirt instead. He's had a couple good finishes recently including second place in the Yokohama Masters and ninth place at this year's Worlds. Today he's piloting the Goblin Charbelcher/Mana Severance deck that has received a lot of attention this weekend.

Masashi is one of the hottest players on the Pro Tour right now. He was Rookie of the Year last year with an astonishing number of pro points. He's also now the first Japanese player to ever pull off a second Pro Tour Top 8. Amazingly, he's made it this far with a deck sporting two copies of Phyrexian Processor, a card that almost all other pros had dismissed, mostly because running it is suicidal in the face of so many Mindslavers.

Nassif won the right to play first. He drew his hand and found Tinker, Goblin Charbelcher, Ancient Tomb, Talisman of Progress, Island, Brainstorm, and Mystical Tutor staring back at him. Masashi opted for a mulligan after a minimum amount of deliberation. He stared at his next six for a full minute before deciding to keep the hand.

Nassif led with Ancient Tomb and fell to eighteen to play his Talisman, then passed the turn. Ooiso opened with Rishadan Port and was done. On end step, Nassif used the Talisman to cast the Brainstorm. He picked up a Mana Severance and placed two Islands back on top of his deck. He then played Polluted Delta, sacrificed it for an Island and Tinkered away his Talisman for Gilded Lotus with one colorless mana floating. Finally, he tapped the Lotus for mana, played Goblin Charbelcher and ended his turn.

Oiso played out Ancient Tomb and Metalworker, but conceded when Nassif showed him the Mana Severance for the turn three kill. 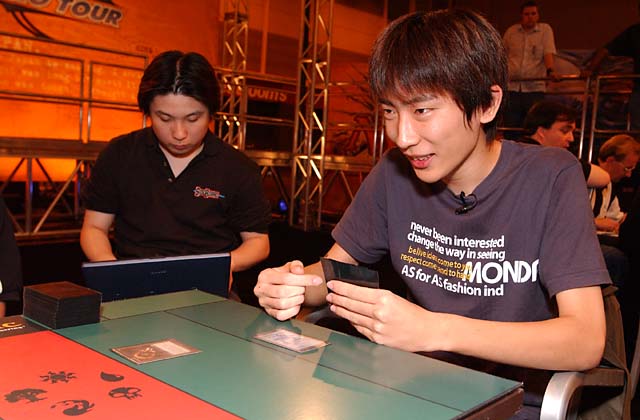 Oiso chose to open this game with a mulligan as well. He rolled his eyes in disbelief when he saw the next six, and after some deliberation, sent those back as well. Finally he kept his five card hand. Nassif reluctantly kept a hand of two City of Traitors, Polluted Delta, Annul, Voltaic Key, Grim Monolith, and Talisman of Progress.

Oiso led with Seat of the Synod and Voltaic Key. Gabriel opened with Delta and immediately sacrificed it to get an Island. Oiso drew and passed the turn back without a land.

Nassif played City of Traitors, then Grim Monolith, followed by Talisman of Progress and Mana Severance. He proceeded to remove all the lands from his deck, setting up his combo and ensuring that he'd draw all action from then on. Oiso drew his card, frowned, and passed the turn back again.

City of Traitors tapped to cast Voltaic Key, which untapped the Monolith. Nassif still didn't have a Charbelcher or a way to find it, so he simply cast another Voltaic Key and was done. As was Oiso, who still couldn't find a second land. Nassif then Brainstormed into two Talismans and another Brainstorm, shuffled his deck with a second Mana Severance, and passed the turn.

Oiso drew and yet again could do nothing. Nassif, on the other hand, drew into Tinker and sacrificed a Voltaic Key to get Goblin Charbelcher, then targeted Oiso with it. Masashi took the opportunity to look through Nassif's deck, but was dead immediately thereafter.

They were immediately on to Game 3 of this relatively quick match. Gabriel's hand was Rishadan Ports, two Grim Monoliths, Polluted Delta, Island, and two Brainstorms. Both players were happy with their initial seven-card hands. Oiso opened with Tinker's broken start of City of Traitors, tap for Grim Monolith, tap for Metalworker. Nassif simply had an Island.

Oiso pondered but then chose to pass the turn without playing a land. Nassif Brainstormed on end step and found both of his Force Spikes, which would possibly be good at this early stage of the match. He then played Polluted Delta and sacrificed it for an Island. Talisman of Progress came down and Nassif was done. Oiso showed two artifacts on end step so that he could untap his Monolith.

"So my Force Spike's no good? Okay," said Nassif.

After it resolved he placed a Voltaic Key on the table. "Eh, I'll take that," commented Nassif as he countered it with a Spike. 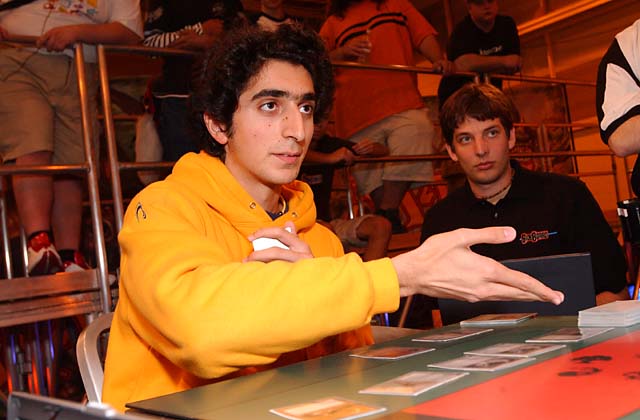 He cast a mainphase Brainstorm and found two Mystical Tutors and another Talisman, then placed one of the Tutors and the other Force Spike on top of his library. Rishadan Port was his land for the turn, but after that he lapsed into deep thought. Port and Talisman tapped for a Grim Monolith, which was used to pay for a Talisman of Dominance. He then used the floating mana and an Island to cast Mana Severance and remove all the lands from his deck. Finally, he declared the end of his turn with only an untapped Talisman.

Oiso tapped his Metalworker for six mana and Tinkered out a Mindslaver, then immediately used it and ended his turn. On end step, Nassif cast Mystical Tutor for Mana Severance, ensuring that he could not draw a card that would hurt him such as Goblin Charbelcher. Masashi tapped the Talismans for colored mana, cast the Mana Severance and a Grim Monolith, tapped Nassif out, and went back to his own turn.

Metalworker tapped to provide eight mana. Masashi played Voltaic Key, untapped his Metalworker, and tapped it again, showing three artifacts. Mindslaver entered play, then Tinker exchanged Seat of the Synod for a Processor, paying fifteen life and immediately making a token. Nassif had one turn to draw a Charbelcher or a way to find one, but he drew another Mana Severance and it was on to Game 4.

After that game Masashi pulled some sort of Japanese energy drink out of his backpack and finished it off in four or five gulps. From the faces he was making it didn't look like it tasted very good, but who knows. "Japanese secret magic potion," the table judge added, grinning.

Nassif pulled two Chrome Moxes out of his deck and added a Talisman back in as well as a third Force Spike.

His hand for this fourth game was Tinker, Annul, Port, two Brainstorms, a Talisman, and Grim Monolith. Without immediate access to blue mana, he had to ship the hand back. The six cards were Grim Monolith, Force Spike, Ancient Tomb, Island, Goblin Charbelcher and Mystical Tutor. He feigned reluctance to keep the hand but he was obviously happy to see mana acceleration and access to both combo pieces with some disruption on the side.

Nassif started it off with Island, while Oiso matched him. On the next turn he played Ancient Tomb and cast his Grim Monolith. Masashi cast a Grim Monolith off of City of Traitors, then added Voltaic Key and Metalworker, which both resolved. On end step, Gabriel Mystical Tutored for Tinker. He Tinkered out Gilded Lotus, sacrificing his Monolith, and tapped it and Island for Goblin Charbelcher. Masashi resolved Stroke of Genius for five in his main phase and then activated Metalworker to create six mana, showing two Metalworkers and a Tangle Wire. One of the Metalworkers and the all-important Wire made their way onto the play area.

On upkeep, Gabriel activated his Charbelcher targeting a Metalworker, but only managed to deal one damage. He passed the turn back. Masashi had nothing during his main phase. Nassif left his Lotus untapped and resolved a Talisman, then Oiso cast a Stroke of Genius for seven cards, again playing around the Force Spike that did in fact happen to be in Gabriel's hand.

Oiso untapped and activated both Metalworkers, then used his Voltaic Key for a total of forty-one mana. When he tapped both of his Islands and placed Upheaval on the table, Gabriel gave up.

Nassif's hand for the final game was Polluted Delta, Chrome Mox, Chain of Vapor, a Talisman, two Goblin Charbelchers, and Mana Severance. He chose to send it back, and saw Ancient Tomb, Rishadan Port, and all four Mana Severances. No good. Trying with five: Polluted Delta, Gilded Lotus, Talisman of Progress, Grim Monolith, and City of Traitors. He kept that one, having little choice.

Masashi decided to share in the pain by taking a mulligan of his own. He deliberated over the six card hand but eventually chose to keep. Nassif led off with City of Traitors and Grim Monolith. Nassif knocked the top of his deck, then drew, yelling "Yus!" when he saw the Mana Severance in his hand. He played out Gilded Lotus, the Talisman, and Severance while Oiso could only stare in disbelief. He ended the turn with one card in hand. Was it the Charbelcher?

Masashi played City of Traitors and jokingly slammed Metalworker down onto the table, but could do nothing else. Nassif knocked his deck again, drew, but couldn't do anything as his hand had been Polluted Delta and he drew a second Severance. He was at least going to be able to untap his Monolith on Masashi's end step. Meanwhile, Oiso sat there doing Metalworker math for what seemed like forever. He tapped it, revealing two artifacts and played Processor, thinking Gabriel was at nineteen from an earlier use of a Talisman.

Unfortunately, the Talisman had been tapped for colorless mana, and the life score was currently twenty to twenty. Masashi asked to take it back, but was denied by the head judge. He paid nineteen life anyway. Nassif lightly tapped the top of his deck, drew, placed the card in the back of his hand and peeked, finding Brainstorm. He placed it on the stack, drew, and peeked.