By By Brian Kibler 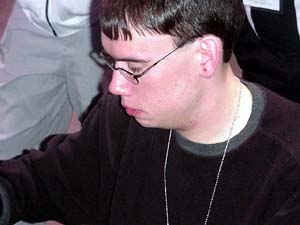 a Top Eight full of famous faces, it's a pair of amateurs who square off in this semi-final match. Saunders took down the seemingly unstoppable Ben Stark in his quarterfinal match, while Meves ran over Blake Quelle. Both players have been proving "Red Deck Wins" more than worthy of its name so far this weekend.

Nathan won the right to play first with an impressive twenty on the roll of a die. It seemed as if that result may have been a portent of things to come, as Nick took not one, but two mulligans to start the game, while Saunders stuck with his seven. Nathan came out quickly, playing a pair of Grim Lavamancers and a Seal of Fire by his second turn courtesy of Chrome Mox, while Meves merely sat back with hardly any action of his own. What Meves lacked for spells he made up for in land, with a trio of Rishadan Ports and a Stone Rain punishing a mana-light draw on Saunders' part.

Unfortunately for Meves, however, Saunders' Lavamancers continued their march unopposed despite their controller's lack of mana. Saunders kept Meves pinned down under a Tangle Wire once he drew into a land and a second Chrome Mox, and Meves could only muster a Jackal Pup and Grim Lavamancer in his defense. The little red men didn't last long in the face of Saunders' Lavamancer and Seal of Fires, and it wasn't long before Meves' life total was down to single digits. A morphed Blistering Firecat provided a temporary reprieve, but Saunders shot it down with his Lavamancer and added a Jackal Pup to his assault. Meves could only sit back and wish the four Rishadan Ports he drew were something more useful. A second Tangle Wire from Saunders was excuse enough for Meves to move on to the next game.

Meves' unlucky streak continued in Game 2, as he was yet again forced to take a trip to Paris. This trip, however, wasn't quite as long as the last, and he stuck with six. Saunders once again kept his seven. The early game action could hardly be described as either fast or furious, as Meves traded burn spells for Saunders' creatures while the latter played out a Cursed Scroll and aimed a Volcanic Hammer at his opponent's noggin. 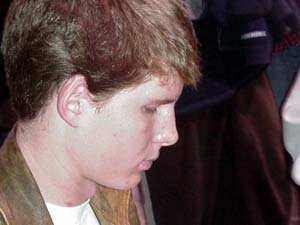 It looked as if things could get ugly when Meves started on Saunders' mana supply with a Stone Rain on turn three, but he couldn't follow it up on turn four and suddenly Saunder's Cursed Scroll was starting to look scary. Seal of Fire took out Slith Firewalkers on both sides of the board and then the game ground to a halt as Tangle Wires started hitting play on both sides. Meves kept up his mana advantage but again had little in the way of action, while Saunders had a mitt full of cards but due to the Tangle Wires was lacking the mana to play them. Fading did as fading does, however, and it wasn't long before Saunders summoned a very threatening Fledgling Dragon. With four sources of red on his side of the board and his opponent's life total at fifteen, it threatened to end the game in a mere two attack phases if it stayed in play.

Meves - with an unimpressive two-card grip - could only answer with Grim Lavamancer. The Wizard promptly fell to a Firebolt and the big dragon came over in the air for eight. Meves drew his card and stared long and hard into the face of inevitability. He saved Saunders the trouble of turning his dragon sideways by extending the hand.