By By Neil Parker 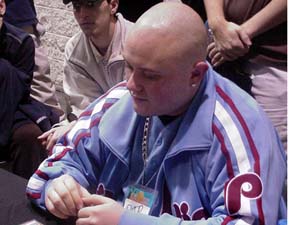 convention center was packing up at the start of this match, so the players were moved to a back corner of the hall. Ben and Peter shuffled quietly as the match begun. Peter won the die roll and chose to play. Both players mulliganed to six, then the game began.

Both players started out playing lands and saying go, with PTR dropping a Rishadan Port to keep Ben off of his mana. On Ben's third turn he Duressed Peter seeing Tangle Wire, Tangle Wire, Metalworker, Gilded Lotus, and Tinker. Ben took the Tinker and said go.

Peter untapped and dropped a Metalworker, then passed the turn back. Ben bounced right back with a Diabolic Edict to get rid of the Metalworker.

Peter's next turn saw him play a Seat of the Synod and a Tangle Wire. Ben had to tap all four of his lands during his upkeep, then played a Skycloud Expanse and sent the turn back.

Peter untapped, drew, played a Voltaic Key, and said go. On Ben's upkeep he Ported Ben's island with Tangle Wire on the stack, tapping Ben down to one land. Ben then shipped back the turn without playing a land.

Peter taps down a Tangle Wire and a Voltaic Key, then plays a Thran Dynamo and shiped the turn to Ben. After tapping to Tangle Wire, Ben destroyed PTR's Dynamo with a .

On Peter's next turn, he played out Ancient Tomb, Thran Dynamo, Gilded Lotus, and Tangle Wire. Ben floated mana with the Tangle Wires on the stack and Disenchanted PTR's Lotus. He then played a Polluted Delta and sent the turn back.

PTR's next turn is uneventful as he simply ships it back to Ben. Ben taps down to Tangle Wires, then s the Dynamo in his main phase.

Peter comes back hard with a Seat of the Synod, Tinker sacrificing Voltaic Key to get Myr Incubator, then plays out a Tangle Wire. Ben taps down his land on his upkeep and send the turn back. Peter then sacrifices the Incubator with Tangle Wire on the stack, and ben concedes.
"Did you ever play Humphries at masters or something untimed?" - Paul Rietzl
"Are you poking fun at me?" Ben Rubin

Ben played first and mulliganed to six. Peter then mulliganed as well, and kept his six.

Ben started out the game by playing a Polluted Delta. Peter played an island and passed the turn. On Peter's end step, Ben cast Peek seeing two Rishadan Ports, Chalice of the , Myr Incubator, and two Grim Monoliths. He then played a Flooded Stand and was done.

Ben untapped and destroyed the Dynamo with a . After a dispute about whether a Chalice set on one would be countered by his Chalice on Two, PTR played a Metalworker and passed the turn.

On Ben's next turn he cast a Deep Analysis followed by a Duress, knocking out a Myr Incubator, leaving PTR with a Chalice of the . PTR simply passed the turn back after drawing. Ben then flashed back Deep Analysis, played a Shadowmage Infiltrator. Peter untapped his Grim Monolith on Ben's end step.

Peter drew and passed the turn back. Ben attacked with Shadowmage, only to be blocked by Metalworker. In his second mainphase he cast a Brainstorm, then went to PTR's Chalice. In response PTR cast Stroke of Genius for seven cards. Ben then cast edict to kill the Metalworker, and passed the turn.

Triskelion came out on PTR's side and it was Ben's turn. Ben Brainstormed on his turn, then dropped a Seal of Cleansing to kill the Triskelion, which shot down the Shadowmage before dying. Ben then cast a Duress taking Upheaval, leaving Peter with Island, Island, City of Traitors, Masticore, Tangle Wire, and Chalice of the . Ben then played a Meddling Mage set on Masticore. Peter's only response was a Chalice of the set on two.

The next two turns Ben attacked with Meddling Mage to knock Peter down to 14. Peter drew and played a Mindslaver and immediately activated it. On Ben's next turn, he showed a hand of and Disenchant. Ben drew another . PTR made him play a caves, tap for 3 pain dropping him to 11, then cast the Disenchant so it would be countered by the Chalice.

PTR didn't have any action to follow it up on his turn and sent it back. Ben then drew, played and flashed back a Deep Analysis on his turn and shipped the turn back to PTR. PTR then got up and left to use the bathroom.

When he got back he drew and passed the turn. Ben continued to beat him down with Meddling Mage and found an Energy Flux that shut down PTR long enough for the win. 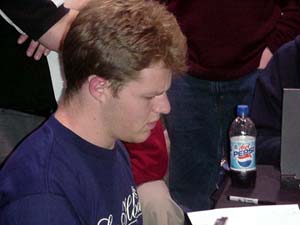 Both players kept their opening hands with Peter playing first.

Ben opened with a Duress taking a Chalice of the seeing Triskelion, Voltaic Key, Metalworker, City of Traitors, and Seat of the Synod. Peter cam back with a Metalworker which Ben Smothered on his turn. Peter played a Voltaic Key while Ben Meddling Mageed for Triskelion.

After coming in for two with the Mage, Ben cast Deep Analysis. Peter came back with a Chalice of the set on two. Ben flahed back the Deep Analysis and played a Shadowmage Infiltrator. In three short turns Peter succumbs to the Invitational army