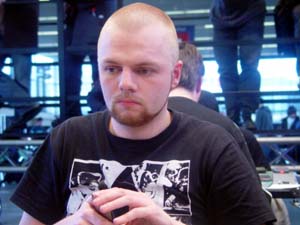 thinks that the matchup will not be a pretty one. Unless Olivier gets equipment tricks going on with Leonin Denguard, the game will become a stalemate that heavily favors Nicolai. Olivier has no answer for Molder Slug, and Nicolai is also going to board in Incite War. Nicolai would like to point out that he is very happy to play with Solemn Simulacrum, since the picture is so pretty.

Olivier is also of the opinion that he does not really have a chance. As both have slow decks and the match is best out of five, not even the occasional luck factor will be enough to swing the tide. Olivier's main plan is his only flier Skyhunter Patrol, or that Nicolai has trouble with mana. The French is happy anyway as he just almost lost versus Michael Turian, "Who had a terribly awful deck".

Trashtalk began immediately as the players sat down.

Nicolai: The last time we played was in Grand Prix Madrid. You played so bad and looked so young.
Olivier: Yes, I had the perfect draws.
Nicolai: And a smooth face.

Olivier just stood there taking the beats. "Yes, I was eighteen".

Olivier mulliganed and started with Bonesplitter. His second-turn Myr was made less aggressive by a Tel-Jilad Chosen. Olivier played second Myr, and Fangren Hunter on the next turn. Nicolai just played a land. Olivier equipped the Hunter and attacked with it and two Myrs, and Nicolai's Predator Strike helped take down the 4/4. On his turn Nicolai basically ended the game by Deconstructing the Splitter and dropping Molder Slug. Olivier said that he is considering the "Right click, concede game". He played nothing, and Nicolai Entwined a Journey of Discovery. "That's not a real spell, but you are still dead as a #removed due to inappropriateness#". Trolls of Tel-Jilad entered the play next turn but got Arrested. Olivier conceded as the Norwegian showed Wurmskin Forger.

Olivier boarded in his own Forger for a useless Turn to Dust, even though Nicolai was likely to board in Neurok Hoversail. The card is just too limited versus a single card. The players started discussing the draft.

Nicolai: You should have taken Empyrial Plate over Crystal Shard…there was a chance that you don't have blue as a maincolor, and Plate is better than splashed Shard.
Olivier: I am not sure…the pack would have been nice in a money draft.

No mulligans were taken. Olivier started with a Myr and said "I need just this kind of hand to win". Nicolai informed that he would not win, as dirty things were about to happen. Then Herzog played Hoversail. Olivier cast Skyhunter Patrol and Nicolai was happy with Spikeshot. Ruel attacked and brought down another Myr and a Cathodian. Nico shot Myr and played Replica. Olivier went aggressive on his turn with Taj-Nar Swordsmith-Splitter, equip Patrol, attack for seven. Suddenly Nicolai was totally on the defensive. He just played a land a passed. Patrol, Swordsmith and Cathodian entered the red zone.

Nicolai: This is so bad if you have Roar of the Kha. 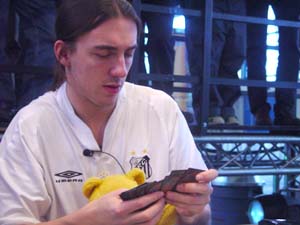 Replica blocked Cathodian then was sacrificed to deal with Splitter after damage was on the stack, and Spikeshot finished the Cathodian during combat causing manaburn. Nicolai played Icy Manipulator. Olivier drew Wurmskin Forger and was very happy. He put two counters on the Swordsmith and one on the Skyhunter Patrol, hitting Nicolai down to two. On his turn Nicolai just made the Spikeshot flying. Olivier went for the kill but Predator's Strike meant that Spikeshot took down both Forger and Patrol while Smith was tapped. Nicolai had his eighth land and safely dropped Trolls of Tel-Jilad. Ruel played Plated Slagwurm, and Nico immediately had the answer with Tel-Jilad Exile.

Olivier drew a land and started smiling. When Nicolai was thinking during his turn, Olivier flashed him a hand of two lands when the Norwegian was looking elsewhere. How cunning. The flying Trolls started closing the difference in life points. Meanwhile Spikeshot was shooting for one. Nicolai suddenly got all serious during his turn after being all happy and smiling. Was this the end of childhood? "I am at two life, is that right?"

The Trolls stopped beating and Nicolai just shot to the head with Smith for three turns. Olivier drew nothing so the Trolls finally killed him. Nicolai then told that he was afraid of Razor Barrier, Roar of the Kha, and Arrest. Olivier said that he had drawn Razor Barrier and now needed to draw one of the other two to win.

Nicolai: So, that was the only hand you can win with? (Getting all playful again)
Olivier: Well, it could have been a little better.

Olivier went first again and laughed at his opening hand with four Forests.

Olivier: The worst is, I have to keep this.
Nicolai: So, what actually do you do nowadays? Are you still an English student?
Olivier: Yes, but I plan to switch to Japanese. I am going to spend three weeks at Grand Prix Kobe to play a Grand Prix as well. I really like the Japanese culture. So, what do you do?
Nicolai: I am a professional bum. 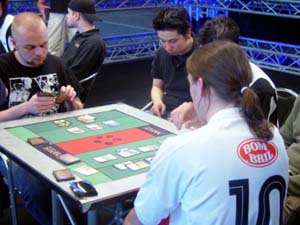 Ruel had the Splitter again, but no other plays for a few turns. Nicolai played Talisman of Dominance, Pyrite Spellbomb and Hematite Golem. Olivier drew Crystal Shard for his fourth turn and used it immediately. Nicolai played Goblin Replica. Olivier went crazy with Deconstruct on the Replica and Fangren Hunter, but Electrostatic Bolt and Spellbomb finished it off. This was critical since soon it would have been equipped and protected by Crystal Shard. Nicolai replayed Hematite and Olivier just had Vulshok Gauntlets. "Attack for five". Arrest took care of the Golem but Nicolai played Molder Slug. The situation soon got so desperate that Olivier walked into the audience just to watch his own picture from the television screen. Yes, he is that odd. Meanwhile Nicolai played his "absolutely favorite" card, Solemn Simulacrum, which was in fact signed by Jens Thoren. Olivier managed to pull a few faces before the inevitable end.

"It was Molder Slug against the world, and the world did not stand a chance" - anonymous American fan