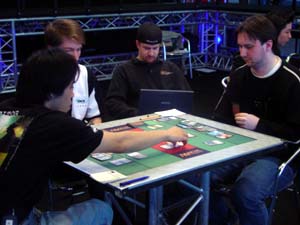 common consensus going into today's draft was that Anton Jonsson was the favorite to walk away with the championship trophy. This is his third Pro Tour Top 8, and he's considered one of Europe's top players. Combine this talent with the practice of countless Magic Online drafts, and you've got a formula for success. If Jonsson was the favorite before the boosters were opened, he's definitely the player expected to win it all after the decks were drafted. His deck contains three bombs in Pentavus, Platinum Angel and Megatog, and has plenty of power in between.

Osamu Fujita is one match away from the finals, a place he knows all too well. Fujita is highly regarded in Japan, but has been nicknamed a "Silver Collector" due to the fact that he often reaches the finals of major events, but has yet to win one. Today is his chance not only to pull it off, but also to become the first Japanese Magic player to win a Pro Tour.

Jonsson played Bonesplitter, and Fujita had Myr Retriever. Copper Myr provided Jonsson with acceleration on turn two, and Fujita had one of his own. Jonsson's Spikeshot Goblin threatened to be a monster due to the Bonesplitter, so Fujita used Fabricate to search up Rustpore Ram. The Spikeshot became active, shooting down the Retriever, and Jonsson played AEther Spellbomb. The Ram came out to destroy Bonesplitter, and Jonsson sacrificed the Spellbomb to draw a card on end step. The Spikeshot took out Fujita's Silver Myr, and Vulshok Berserker hit the ground running to deal three damage. Fujita played Crystal Shard, and used his remaning mana to summon Somber Hoverguard. Thirst for Knowledge provided Jonsson with some card advantage, as he discarded AEther Spellbomb. The Berskerer dealt three more damage, and Jonsson added Krark-Clan Grunt to his side.

Fujita played Frogmite for one mana, and attacked through the air with the Hoverguard. Jonsson now dropped the Megatog, getting a look of disappointment out of Fujita. He continued to chip away at Jonsson's life total with the Hoverguard, and played a Skeleton Shard. Jonsson played Gold Myr and Grid Monitor, then sent the Grunt, Berserker and Megatog in for an attack. Rustpore Ram blocked Megatog, and Frogmite blocked the Berserker. Jonsson went all in, sacrificing his artifacts to make the Megatog lethal. It was a hard decision to make because Fujita had one card in hand and the mana open for Terror, but he didn't have it.

Jonsson opened with AEther Spellbomb, while Fujita accelerated with Silver Myr. Jonsson played Bonesplitter, and in one turn Fujita played Scale of Chiss-Goria, Frogmite and Somber Hoverguard. This draw was far faster than anything Jonsson could keep up with, as he simply drew a card and said go. Frogmite, Silver Myr and the Hoverguard attacked to deal six damage, and Fujita continued to build his affinity army with Myr Enforcer. Jonsson sacrificed the Spellbomb, looking for anything to stop the assault, but only found Leonin Scimitar. The draw was simply too fast to handle, and the match became tied at one game each. 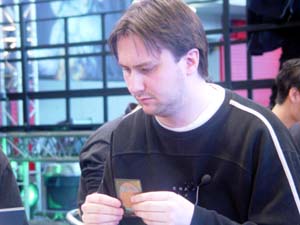 Fujita mulliganed down to six. Jonsson played two AEther Spellbombs, and cycled through one. He drew, shook his head, sacrificed the other one, and still missed his third land drop. The best he could do was to play a Leonin Scimitar, and Fujita summoned Wizard Replica. It attacked on the following turn, and was joined by Frogmite. Jonsson still couldn't find a third land, and Somber Hoverguard added even more pressure. Lodestone Myr was Annuled and Jonsson finally drew a land to play Wizard Replica, but too much tempo had been lost.

Once again, Fujita mulliganed his opening hand. Jonsson played a Bonesplitter and a Myr, and Fujita had a Myr of his own. Jonsson now played Spikeshot Goblin, a formidable threat with Bonesplitter waiting to be picked up. Fujita had the answer in Terror, however, and was able to stop what would have otherwise been a devastating threat. Jonsson came back with Alpha Myr and Krark-Clan Grunt, and Fujita played a Scales on end step. He untapped, played a land, and had no spells. Jonsson played AEther Spellbomb, attached Bonesplitter to the Grunt, and attacked to deal six damage. He then played Copper Myr, and was left with no cards in hand. Regress bounced the Grunt on end step and Fujita played Neurok Familiar, milling off Irridiate. Mask of Memory came out and equipped the Familiar. Blocking Jonsson's next attack would have accomplished very little, and he went to eight. The Familiar attacked, and Jonsson decided to bounce it right there with the Spellbomb, rather than saving it for any potential blocker. It came back out, and hit a Frogmite to help Fujita claw and scratch his way to stay alive. Jonsson drew Pentavus and thought for a bit, before deciding to summon it. This meant he couldn't attack with his Myrs for the turn (in a spot where he was trying to put as much pressure on Fujita as possible), and also left him vulnerable to Crystal Shard. Since Fujita had one card in hand, it was a reasonable risk to take.

The Familiar got through for damage, and Fujita got to dig a little deeper into his deck thanks to the Mask. He played AEther Spellbomb, and a Frogmite for free. The Spellbomb bounced Pentavus before Jonsson could untap and get activations out of it, plus Jonsson now only had six mana available due to sacrificing an artifact land to a Grunt during combat on the previous turn. Since Jonsson had no cards in hand other than Pentavus, Fujita was hoping that a land wouldn't come off the top. It did, and the Pentavus came right back into play. The Familiar got through for damage once again, and Fujita summoned Myr Enforcer. Jonsson's Grunt picked up a Bonesplitter, and Fujita kept throwing Myrs and Frogmites in the way. The Pentavus made four fliers, and the game ended soon after. 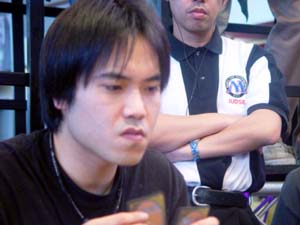 Both players had turn two Myrs. Fujita played another on turn three, and missed his third land drop. He certainly wasn't lacking options, however, as he played a Retriever, Frogmite and Somber Hoverguard all in the same turn. Mask of Memory would have made the game fairly difficult to win, but Jonsson had Annul. Fujita kept the fast affinity creatures coming, playing Myr Enforcer. Jonsson was trying to keep up, playing Frogmite and Neurok Spy. Both along with a Myr ganged up on the Enforcer, and a Scale made the combat situation a Spy for Enforcer trade. Relic Bane went on the Scale, and Jonsson went to ten life on upkeep. He played a Copper Myr and ended his turn, holding Megatog and Pentavus. With no red mana available he couldn't play the 'Tog, and it would be at least two turns before he could play a Pentavus and get it going. Fujita's fast draw didn't provide much room to catch up, and soon he was off to the finals yet again.